At the forum, Area D candidate Sathvik Nori, a recent M-A graduate and former Board Student Trustee, said, “I feel that some people at the District believe that equity means bringing those at the top down, rather than bringing everyone up to the same level of excellence. I was surprised that I was the only one [as Student Trustee] in opposition who raised the concern that detracking may not be the best approach to achieve equity.” The 19-year-old Nori won by a landslide 14% margin.

Removing honors and non-honors “tracks” is called “detracking.” To read more about the research behind detracking, click here.

For years, in order to diversify classes and reduce student stress, M-A has chosen not to offer some advanced courses. For example, unlike most nearby high schools, M-A doesn’t offer AP (Advanced Placement) Government or an AP Economics course. In the 2021-2022 school year, M-A got rid of Advanced Standing (AS) Chemistry for sophomores. M-A also combined AS English I and English I into a single Multicultural Literature and Voice (MCLV) class for freshmen, though M-A still has two other levels of freshman English for students who need more support.

SUSHD Assistant Superintendent of Educational Services Bonnie Hansen said, “All comprehensive sites in the District still offer two levels of separate English classes for students not ready for college prep English. Sequoia High School was the first school in the district to combine college prep English with honors English and they have seen no drop in the number of students who would have been in 9th grade honors English choosing IB [International Baccalaureate] courses.”

Many teachers support detracking, claiming that a tracked school is a segregated school, explaining that students in honors courses are predominantly white or Asian and from wealthier middle schools. Science Department Chair Lance Powell said, “The idea was that some of these kids coming from other districts could do the same level of work, but at M-A there is this track where students self-segregate.”

He continued, “We wanted to get away from that old-school thinking approach, and we’ve been pushing to detrack for years. And then, partially due to some pressure from the District, we’ve made some pretty dramatic changes over the last five years.”

Still, the detracked MCLV freshman English class is drawing attention from parents at M-A. According to Principal Karl Losekoot, “We’ve done some detracking in biology also, and I haven’t seen the pushback anywhere near what I felt around MCLV.”

We polled over 200 former MCLV students, sophomores enrolled in AS English II and English II, on their experiences in MCLV. We also spoke with three current MCLV teachers to better understand the effects of the change.

Former AS English I and current MCLV teacher Lara Gill said, “My students in MCLV started sharing in their groups as they got more comfortable with students on both sides of the 101. They talked about how their families came to California or how they came to Menlo Park specifically, which was really powerful. They connected with Enrique’s Journey by Sonia Nazario, relating to coming here and reinventing yourself. They also resonated with this element of sacrifice that parents always make for their children.”

Powell said that when students with differing academic skills are separated, they lose the opportunity to learn from one another. He said, “One person might be doing the bare minimum and see what’s going on with students at the highest ceiling and notice what’s available and think, ‘Oh, that’s really interesting. I could do that too.’ But, if they’re in a completely different room with a different curriculum, they never see that.”

Former AS English I and current MCLV teacher Rachel Wan said, “Students are learning from each other. It’s the way people are laughing together, asking questions and helping each other which makes them feel comfortable to share their experiences. That is the value of being in a class where everyone is together.”

However, some current sophomores who took the class last year didn’t feel the same about MCLV. In an anonymous survey, one AS English II student said, “I do enjoy the concept of MCLV, but, in my opinion, it’s not working out the way it could be. It just seems like a class that forces people to be in the same room, with not much incentive to work together, connect, and collaborate.”

Student’s Connectedness to Their Current Class (2022-23) 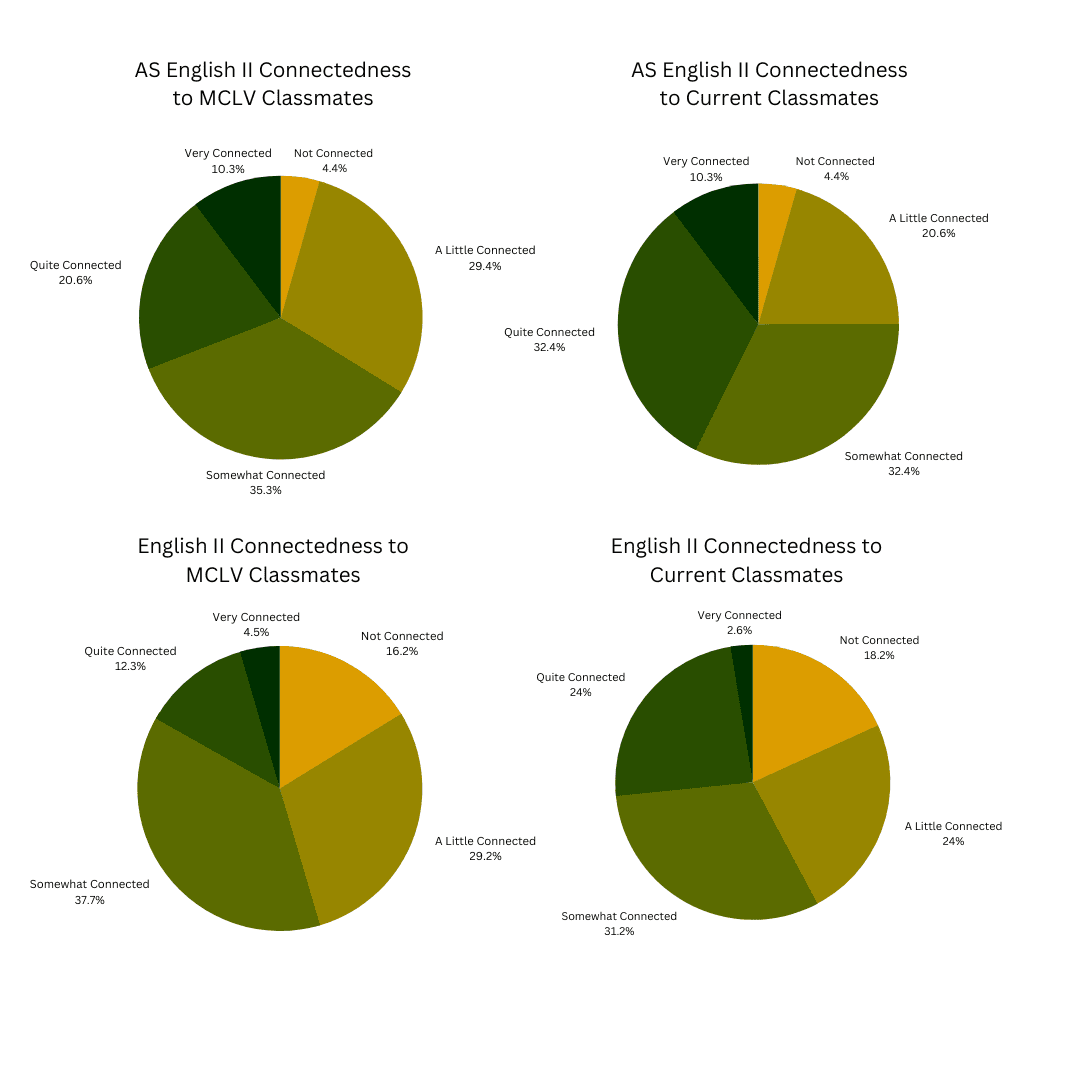 Just two months into the school year, some surveyed AS English II and English II students reported feeling slightly more connected to their current “tracked” class than their MCLV class last year. This trend might be related to the fact that most sophomores are now in more homogenous classes: they are more likely to share similar backgrounds with their classmates.

According to Powell, “The goal and thing teachers like about detracked classes is that students are all scrambled up and ‘heterogeneous’ or diverse, and kids are learning from each other.”

Some proponents of detracking have argued that it would lead to more diverse honors and AP classes. Research suggests that detracked classes encourage more students to take more rigorous classes down the line.

However, AS English II sign ups have shown growth in size but not in diversity. Data from a Freedom of Information Act (FOIA) request, filed by the M-A Chronicle, reveals only slight shifts in enrollment in AS English II and English II since implementing MCLV. 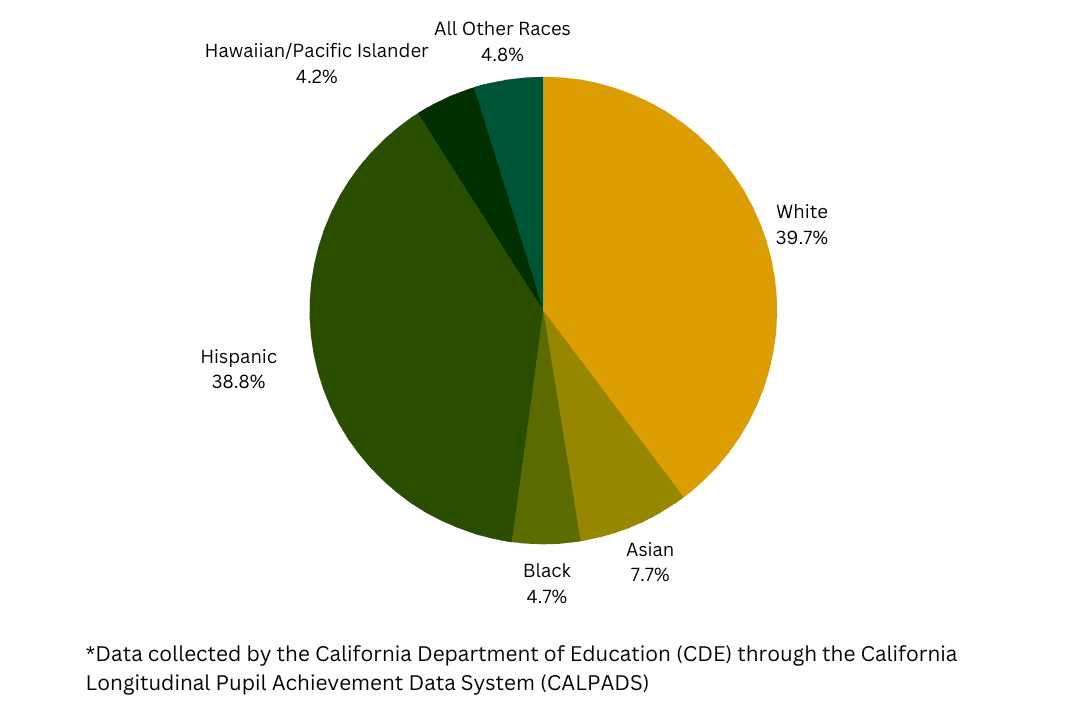 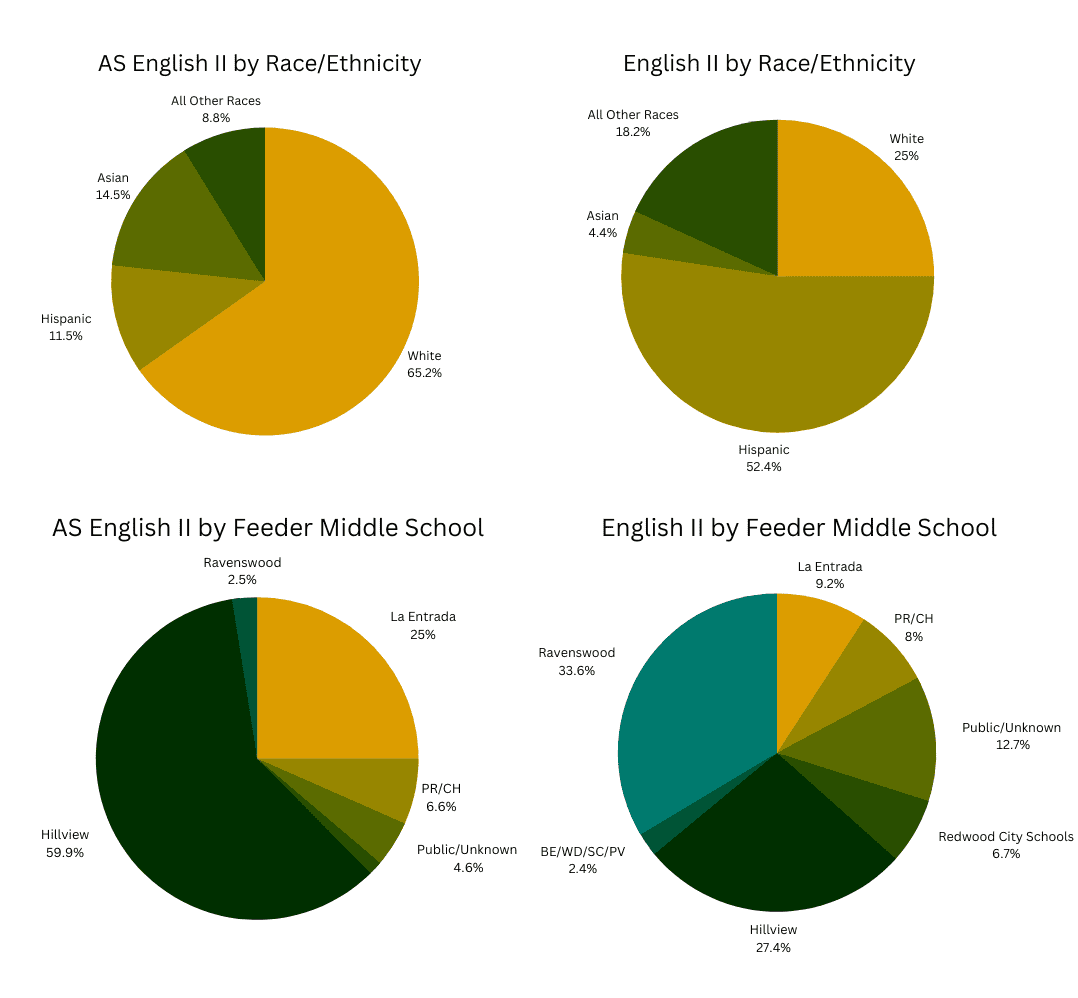 The portion of white sophomores enrolled in AS English II has consistently increased in the last five years, from 65% in the 2018-2019 to 72% this year. Students from the predominantly white and Asian middle schools, La Entrada and Hillview, have also enrolled in AS English II at a higher rate. Among Hispanic students, numbers have been relatively stagnant, as has enrollment by socioeconomically disadvantaged students.

Trends among students defined by the District as “all other races,” including Black, Pacific Islander, Indigenous, and mixed race students are difficult to track given their overall low enrollment at M-A. Privacy laws prevent the District from disclosing data on small student racial group demographics.

Decreasing AS English II and English II enrollment from Ravenswood City School District middle schools—a 55% drop in five years—could reduce detracked classes’ ability to create a diverse environment. All of M-A’s classes are becoming increasingly white, even detracked ones. One English II student said, “I wish MCLV was more inclusive to people of color. I felt no real connection to my peers since most of them were white.”

Student Enrollment in AS English II and English II

by Feeder Middle School (Over 5 Years)

Critics of detracking also claim that non-AS classes would be less substantive. However, current MCLV and AS English II teacher Erin Walsh said, “In some ways, we are teaching MCLV at an AS level and even including more texts with more diverse authors, just with additional academic support.” MCLV continues to teach many of the texts that AS English I has taught for years, including Night, Enrique’s Journey, and Romeo & Juliet with the addition of more Asian authors and more passages overall.

An English II student said, “I liked that MCLV had a wider range of what we were reading.” 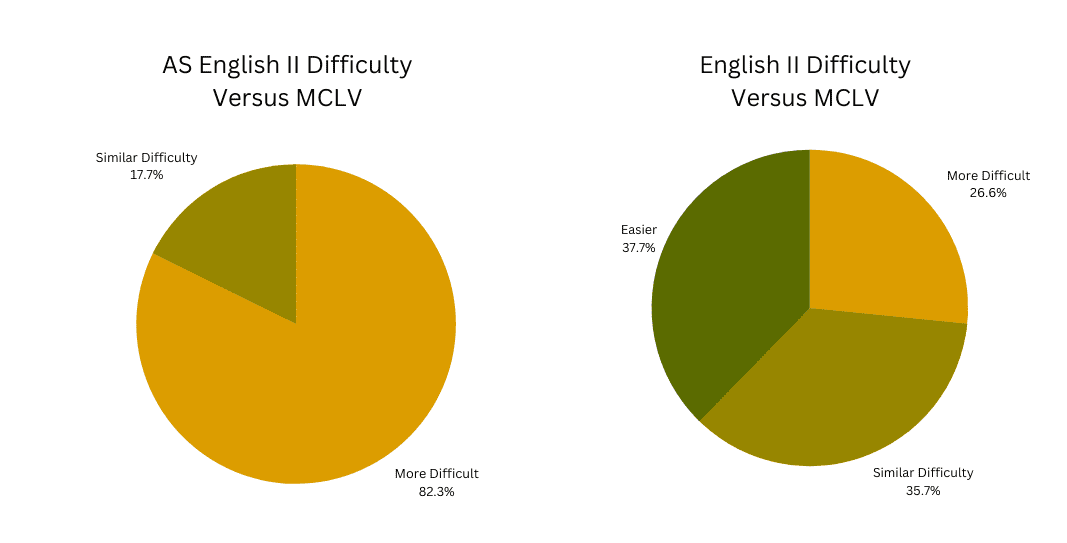 Walsh said, “I don’t think ‘rigor’ always means more ‘work’ in the traditional sense. To really dig into a text—to close-read, analyze, and then reflect on that analysis—takes a lot of time, and is also incredibly rigorous. Sometimes, interacting with a novel or piece of literature with that level of rigor requires slowing things down.”

Researchers such as Kevin Welner, an education professor and Director of the National Education Policy Center argue that the most effective way to detrack is by creating a universal standard of high expectations, providing support to struggling students. MCLV teachers used this model in developing the class.

Walsh added, “I will almost always provide sentence frames, graphic organizers, and other supporting materials to help students complete assignments, but these are always optional. Including these supports in one universal assignment allows everyone to access and interact with the content with confidence.”

Early in the year, rumors circulated that there was an unusually large amount of AS English II drops, potentially interpreted as MCLV under-preparing students for the rigor of an AS course. However, Losekoot said in a presentation to the Board, “Last year, six students dropped from AS English II. This year, the number is 11. Pre-pandemic, there were usually six to 12 drops in an AS English I class. You are looking at around the same numbers that would try an AS class, and drop an AS class.”

Of surveyed English II students who dropped AS English II, one student said, “I am taking a lot of hard classes this year, and the workload for the class was too much to keep up with and too rigorous.”

Another student who dropped AS English II said, “I was absent for almost 3+ weeks at the start of this year, and my teachers and counselor recommended that I drop the class, as well as dropping AP World History.”

It is also possible that these drops from AS English II correlate with increased enrollment in the new AP World History course. AP European History was taken away as an offering last school year and replaced with AP World History.

Consequently, since more students are challenging themselves in an AP History class during their sophomore year, they might be less likely to also take an AS English class that provides no added GPA boost.

According to Gill, “In terms of stress, we are mindful of the steps that kids need to take to complete the classwork. We also really want kids to do the homework that we assign and not stay up until two in the morning reading 40 pages for over an hour.”

Average Amount of Homework (in minutes) in MCLV

Gill added, “It still feels really rigorous. It feels like they’re constantly reading, and they’re constantly writing. But, as always, the intention is not to create stress for kids, but to prepare them for the thematic complexity of what they’re going to see in their later English classes.”

504 plans, or special accommodations like extended time on tests, are one indicator of student stress levels. At an October School Board meeting, Principal Karl Losekoot said, “Roughly 50% fewer students came in without 504 plans and requested one as freshmen compared to the prior year.” While 504s measure more than stress, this metric suggests that students as a whole may be less stressed.

To this end, there is also a limited number of AP courses available to underclassmen, to prevent students from overwhelming workloads early on.

Powell said, “I have a student right now who’s in five AP classes, and she got sick and missed a week of school, and it’s a really big deal. Her academic demands of her week are way more than I’ve experienced as a college student or grad student. That’s what’s happening at M-A. We have high level course offerings available, and while we want to keep them available, we don’t want students to be completely stressed out.”

Staff interviewed emphasized that it is still too early to draw any harsh conclusions about MCLV. Losekoot said, “I hope our school board, our community, and our students can give the course time to see if it can work and really see if we can get those positive impacts on our school community.”

Hansen said, “Across sites, we see teachers able to delve more meaningfully into content, and survey results suggest that students are less stressed in the more heterogeneously grouped freshman classes and know each other better than when divided into separate courses at the 9th grade level.”

Losekoot said, “If we can attain the same level of excellence in a detracked course and have a healthier, stronger, and more connected community, that’s a program I want to support.”