On Friday, November 4th, rap artists Drake and 21 Savage dropped their first joint album, titled Her Loss. The album was an instant classic and, in my opinion, deserves a 8.5/10 rating.

Drake dominates the album, but it feels like 21 Savage is just sprinkled throughout as a featured artist. Drake is the solo artist on four of the sixteen tracks, while 21 Savage has just one track to himself. 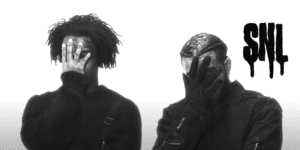 Leading up to the album release, the two released a series of fake media promotions, including an imitation Vogue cover, a false teaser for NPR’s Tiny Desk Concert, and even a spoof of a Saturday Night Live musical appearance.

“Rich Flex” kicks off Her Loss with a multitude of beat changes and production from Vinylz, Tay Keith, FNZ, and BoogzDaBeast that fit both artists’ styles. In a slow segue into the song, Drake boasts about his success, “All you h***, all of you h***, need to remember who you talking to. It’s the Slaughter Gang Ceo.” This fits with Drake’s usual boisterous tone in his previous songs that he’s on top, such as “Way 2 Sexy.” 21 Savage regularly raps on beats like the faster, punchier one earlier in the song, and his lyrics are consistent with his typical gang and drug-related references.

Listeners have also noted Drake’s cheeky tone during “Rich Flex” while referring to 21 Savage, making the song a TikTok hit as well. However, this doesn’t change my opinion on this song, which is that it is somewhat irrelevant to the quality of the song.

The following song, “Major Distribution,” is another high-quality track that pulls from Drake’s style of a slower piano intro that transitions into a verse, like “Chicago Freestyle” from Drake’s Dark Lane Demo Tapes album. This style choice pulls in listeners from other genres that still can enjoy a hype song.  Drake also dominates this song, overshadowing 21. While it’s frustrating that they promoted the album as “joint” and 21 Savage is getting a smaller role than expected, I think 21 Savage excels when he isn’t oversaturated.

A key point of the album was on the track “Spin Bout U” when Drake raps “Damn, just turned on the news and seen that men who never got pussy in school, are makin’ laws about what women can do.” This is in reference to the recent overturning of Roe vs Wade in the Supreme Court, and came a few days before this year’s Midterm Elections.

The tracks “On BS” and “Hours in Silence,” in my opinion, are Drake’s biggest misses, as both drag on quite a bit with long pauses, slow lyrics, and a lack of rapping. “On BS” has a spoken outro that adds nothing to the song. The emptiness of “On BS” mirrors “N 2 Deep” while the length and incongruity of “Hours of Silence” mirrors that of “The Remorse,” both from Drake’s Certified Lover Boy.

My least favorite track on this album was definitely Drake’s “BackOutsideBoyz,” one of the four songs that were solely credited to him, in which Lil Yachty’s lackluster adlibs back up a sing-songy Drake. This more R&B style of music deviates from the rapping I gravitate towards and think he should stick to.

My favorite tracks on the album are “Circo Loco” and “Jumbotron S**** Poppin.” “Circo Loco” samples Daft Punks’ “One More Time” and is very fun and bouncy. “Circo Loco” also included Drake’s controversial line “This b***** lie ’bout gettin shots but she still a stallion” that possibly took a jab at rap artist Megan Thee Stallion, about her alleged lying about being shot by fellow rap artist Tory Lanez. I also thoroughly enjoyed the catchy “Jumbotron S**** Poppin,” which echoes similar grandiose horns to those in Drake’s highly successful “Laugh Now Cry Later.”

“P**** and Millions” was the album’s only standout feature from Travis Scott, where he rapped about the great life and success the artists had, punctuated by Drake’s lyric, “They say Mo’ Money, Mo’ Problems, bring on the problems.” This line refers to the iconic “Mo’ Money, Mo’ Problems” by The Notorious B.I.G., where he discussed the problems that come with fame and fortune. Here, Drake notes his differences in experience to Biggie’s, saying that they need to “bring on the problems,” insinuating that he has no problems right now.

In 21 Savage’s only solo song, “3 AM On Glenwood,” he borrows a lot of style from Drake, continuing Drake’s practice of including a time-and-place song. If this had been on his own album, I would guess that it would probably sound choppier and quicker, and the lyrics would be much more veiled, whereas it is introspective and slower to stay on the right wavelength for the joint album.

The song’s title refers to 21’s home, Glenwood Road in Dekalb County, Georgia, and recalls the struggles of his childhood and how it changed his perspective with the lyrics “Can’t believe they killed Skiney, I really growed up with him,” and “Won a grammy I couldn’t even show it to him.” 21 Savage continues with the lines “Put my kids in private school so they could get prep on” and “Think my heart bulletproof,” which gives the listener greater insight into his family life.

The last highlight track of the album was “Broke Boys,” a much more violent beat that had 21 Savage’s fingerprints all over it and included Drake cussing out Adidas. 21 Savage had a longer part than usual, and the song concluded with a beat switch and outro from Drake.

The only thing that keeps it from being a perfect album is Drake’s tendency to create unnecessarily long songs that don’t fit the album’s overall vibe.

So, overall, I think Her Loss deserves a 8.5/10 rating as Drake showcases his versatility as an artist through his ability to rap with many different tempos and genres of songs, including R&B, hip-hop, and trap. 21 Savage continues to shine as an artist who consistently shows up on features and continually delivers faster-paced “gangster” tracks. I loved the multitude of beat-switches in each track and truly appreciated how Drake borrowed from some of his prior album’s sounds to deliver a seamless, well-crafted album.