The Green Scene: Spirited Students Make the Most of Their First Weeks Back

On the sun-soaked Green, M-A Leadership has been making strides to ensure everyone is feeling welcomed as school starts. 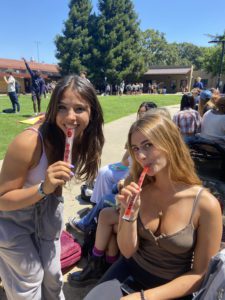 On the first Thursday of the school year, leadership kicked off the year by handing out free Otter Pops while they played pop music and hosted a beanbag toss. The next day, they set up a full-size volleyball net for blockers, hitters, and amateurs of M-A to showcase their skills. Propped on each other’s shoulders to get the best angle, students hugged and cheered after every point scored. 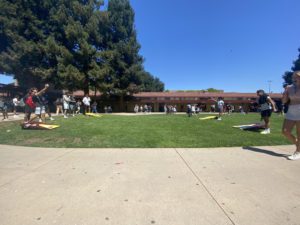 With a flick of the wrist, students attempt to toss the beanbag perfectly into the hole.

On Tuesday, senior Walden Lee took the win in an intense plank competition between about thirty students. Lee finished in the lead at six and a half minutes, and won a free meal from In-N-Out! Lee said, “I surprised myself. The energy was great, and I’m looking forward to seeing what else Leadership has on The Green this year.”

Junior class president and MC of the competition Aaron Becker was delighted to hype up the surrounding crowd with encouraging words. “When people started getting into the event, I had a really good time. It was great,” he said. 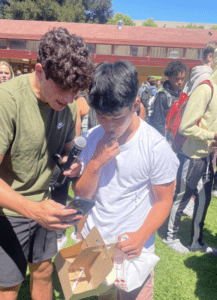 Becker hands Lee his free In-N-Out meal after he won the plank competition.

Strong students continued to shine on Wednesday at an arm-wrestling competition for any pair of winners looking for a donut. Other junior class president, Derick Kennedy, said, “I love the environment of everyone competing and working together. It really builds community within M-A and bonds the grades!”

Finally, Leadership concluded the first week of school with a bang at the Neon Night dance.

All leadership events are posted at @menloathertonleadership on Instagram.