This year, bathrooms across campus have been closed very frequently, and M-A’s student body is pissed. Every day during the week of October 25th-29th, M-A Chronicle journalists checked every bathroom open to students and found that 47.6% of bathrooms were locked during checked times. We checked each bathroom before and after school, during brunch, lunch, and every class and passing period, for a total of 14 checks per bathroom every regular day and nine checks per bathroom on block days. The results speak for themselves. 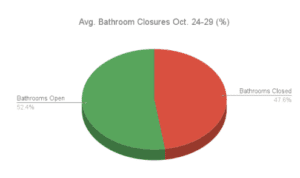 According to Assistant Vice Principal Stephen Emmi, bathrooms are “locked when the bell ending lunch and brunch rings until five minutes into the period” as a result of “a huge increase in vandalism in the bathrooms,” and “kids grouping together in the bathrooms to avoid going to class.” The vandalism concern could be in reference to a recent TikTok trend called Devious Licks, where students steal school property as a joke and post videos about it. Nevertheless, our data proves that the bathrooms are locked far more than just after brunch and lunch, and are sometimes locked and not reopened for the rest of the day.

Most of M-A’s campus was built in 1951, so our bathrooms are built to adhere to a specific “Prior to 1994 Uniform Building Code,” which requires one toilet per 100 men and one toilet per 45 women. The most recent California Plumbing Code that applies to buildings built after 1994 states that there needs to be more toilets available per person: one per 50 men and one per 30 women. However, according to the dated “Prior to 1994 Building Code,” and given our student population of about 1,190 girls and 1,250 boys, the school is still required to have 27 toilets for women and 13 toilets for men open at all times.

Our data shows that, on average, only 18 out of the 39 toilets for women are consistently open, which is substantially under the legal requirement. Conversely, the average number of toilets available to men consistently exceeds the requirement at 19 out of 36 toilets open throughout the day. This could be due to the fact that men have both toilets and urinals, and both count as ‘one toilet’ when counting.

Gender-neutral restrooms do not have listed legal requirements; however, our gender-neutral restroom, which was the result of an eight year push vigorously fought for by the Gender-Sexuality Alliance (GSA), has only three toilets, and is seemingly either open the entire day or not at all. The chart indicates that for two days, Tuesday and Thursday, the bathroom was essentially closed all day. 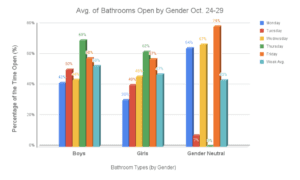 The Average Bathrooms Open by Gender graph displays each day’s percentage of bathrooms open for each particular group, by gender.

Senior Rishi Siddarth said, “I usually go to the K Wing first to see if it is open, since it has a ton of stalls. But when it’s closed I need to waste more class time and go to the G wing or Pride Hall. It’s really annoying.” 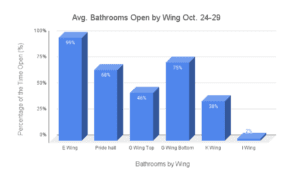 The Average Bathrooms Open by Wing chart displays each wing and the percentage of times it was open when checked. The I-Wing bathroom: was only 2% of the time, due to it being placed in a blocked-off portion of M-A during school hours.

Lots of M-A students have expressed frustration with the closures, and have overwhelmingly said that bathrooms are often locked. Sophomore Kate Budinger explained, “when I have tried to go, they have been locked more times than I can count.”

Sophomore Janiya Moss said that the bathrooms are closed “so many times. It’s terrible—I can’t pee.”

Emmi acknowledged that “not all the bathrooms are necessarily getting reopened after the initial locking during brunch and lunch.” He explained,  “Bathrooms should be open after lunch and then open for the rest of the day.” However, in our data, bathrooms were only open after lunch about 53% of the time throughout the entire week, giving students a 50/50 chance of bathroom accessibility after lunch.

Vice-Principal Nick Muys said that the bathrooms shouldn’t be closed “for more than fifteen minutes during the day.” However, on average, the bathrooms were closed for approximately 175 minutes a day. 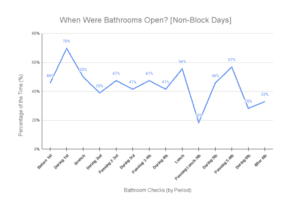 The graph detailing the Average Open Bathrooms on Non-Block Days shows a distinct drop in bathroom availability from lunch to the end of the day, for an average of 36% of bathrooms open after lunch on non block days.

Campus aides and other staff are tasked with opening and closing the bathrooms at allocated times throughout the day. Campus aide Ms. Dixon said, “The instructions we were given from administration were that it’s mainly brunch, lunch, and flex when they want it locked for up to 10 minutes after the final bell rings.” These instructions can be understandably confusing, as there is no set routine to who locks each individual bathroom, just a goal of having them all locked during “intended times.”

Campus aides are also managing all types of issues around M-A’s campus, so bathroom monitoring may not always be a top priority. Steven Guerra explained, “there are a million reasons why they stay closed.”

However, keeping bathrooms open is important for avoiding health and hygiene issues and reducing lost class time. “Holding it in” can actually have negative long term health implications, and wandering around campus to find an open bathroom turns “bathroom breaks” into fifteen-minute excursions which causes students to miss valuable class time. Junior Lily Cobos said, “Sometimes I have to walk all the way across campus just to find an open bathroom.”

Freshman Amanda Jennings said, “I don’t like how the bathrooms aren’t open during class,” as she finds the entire closing and opening “very inconvenient.”

In particular, people that get periods require bathroom access for menstruation hygiene in addition to regular use. Junior Calista Schmidt said, “I think it is especially unfair to girls who need to use the bathroom a lot more for things like hygiene if it is that time of the month.”

The map shows where the available bathrooms are around campus, as well as their availability throughout the week of October 24th-29th. This is indicated with green markers if they were opened, and red if closed.

Both AVPs interviewed sympathize with students, as Emmi said, “I apologize, but this is our attempt to try to recalibrate and monitor our bathrooms and make sure they are not being damaged or abused.”

Muys explained, “Our aim is maximum bathroom access. We will work to address it because it is important. I don’t want this to be an issue of contention for our students who are already having so many difficult days getting readjusted to in-person school and the stresses of academic life.”

Regardless, students are legally entitled to a certain number of toilets open for their use, which isn’t being met on a regular basis. Our administration is in the process of recalibrating the operation as Muys said that, “there were definitely some holes, and we are in need of a more systematic approach to opening and closing.” He also noted that the administration is “very grateful for this research, and I will share it with the team and work towards implementing a better system.”