After two retailers requested to open gun stores in residential Redwood City, the city council placed a 45-day ban on gun sales on October 24th. This would have been lifted on December 8th, but on November 28th, a unanimous vote extended the ban to ten and a half months. The Council voted to extend the ban so they could consider public input and study zoning changes, among other considerations. The Council could extend the ban to as much as two years as they make a decision. For the staff report on the decision, click here.

The first request was for a location in Roosevelt Plaza, a popular location for students and walking distance from Roosevelt Elementary School. The second one was near Sequoia High School.

Redwood City residents have expressed concern about the idea of these new gun stores, writing many letters and speaking at City Hall. Ellen Jacobson, a Redwood City resident and M-A teacher, expressed how she’s “not opposed to a gun store, but it needs to be in an area that is not residential, that is not walking distance to an elementary school. It’s not a place to have a gun store.” Maria Rutenburg, the owner of Chez Nous, a coffee shop at Roosevelt Plaza, said in an interview with NBC Bay Area, “Local government is meddling in issues it shouldn’t be meddling in.” Redwood City currently has no gun stores, and other citizens have also expressed their desire for one. The Second Amendment Federation has threatened to take legal action against the moratorium, which they have done in similar cases nationwide.

“Redwood City, like most cities, regulates everything from where you can locate a multi-family home to where you can get a massage to where you can buy cannabis and so we think firearms and ammunition would be no different,” said Redwood City Mayor Giselle Hale. For this reason, Hale believes that if a lawsuit did come to fruition the city would be on strong legal ground. 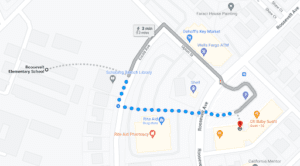 The distance from Roosevelt Elementary School to a potential gun store.

After experiencing multiple gun-related threats at M-A this year, community members are concerned about guns in the area. “We have an epidemic of gun violence in our country. To have a gun store in this location after we’re witnessing shootings at school does not sit well with me,” said Jacobson.