“It was the hardest class at M-A. Everyone talked about how awful it was, and getting a C was considered normal. But Florio was so talented at teaching it, and I will remember him for the rest of my life. His depth of knowledge was incredible,” said M-A alum Julia Olson, class of 2013.

Florio taught at M-A for over 20 years, and he retired after the 2017-2018 school year. While no current M-A student had the chance to take his class, his reputation as the notoriously difficult, eloquent, and refined AP European History teacher lives on through stories from older siblings and teachers.

English teacher Lisa Otsuka said, “Those of us who knew him will remember his impeccable attire, exacting standards, ability to captivate students with lectures, sense of humor, constant witticisms, back-to-school tan, and love for reading, cats, gossip, and good cufflinks.”

In the classroom, Florio was known for his incredibly difficult exams and long, dense lectures. However, retired Administrative Vice Principal Steve Lippi remembers that “there was a lot of lecture, but he was a great, great, great storyteller. He would just make the classes come alive with his knowledge and his board would be filled with notes from top to bottom.”

Retired M-A teacher Jerry Brodkey admired Florio for his ability to “show his students that it was fine for each of them to be who they were.” He said, “Florio was a bright, shining, sparkling memory of my time at M-A. He was one-of-a-kind.”

Florio offered incredible experiences and lessons to his students, both within the classroom and the study abroad trips he chaperoned to Europe. Otsuka said, “We took students abroad six times. We went to Russia, Prague, Berlin, Vienna, and Budapest. This was a big deal for a teacher who had never flown coach or taken a field trip with students!”

For a high school teacher, Florio was the epitome of extravagance and known for his eclectic  style. Lippi said, “He came to school every day just impeccably dressed. A three piece suit or sport coat, ironed shirt, always with a tie, and a pocket handkerchief. He was always well tanned and he looked like a picture of health.”

Florio, however strict he may have been, was a frequent target for senior pranks. One year, students snuck into campus at night and broke into Florio’s classroom to switch all of his belongings with current English teacher Liane Strub’s belongings. Another year, students boarded up his classroom and plastered it shut with stucco and bricks. It took the staff several hours to notice the classroom was missing. In other years, his room was filled with cups of water and balloons. 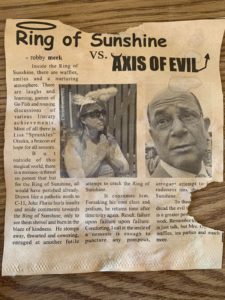 Otsuka and Florio were close friends, and students liked to poke fun at their stark teaching differences. Otsuka, known for her “smiles and nurturing atmosphere,” was named “A Ring of Sunshine,” while Florio, “a menace,” was dubbed the “Axis of Evil” in an old article published by the Bear Naked News, our journalism’s previous print program.

Students used pranks and satire to show their appreciation for Florio. Lippi said, “I think it just kind of points to how students will do that to teachers they truly respect, love and feel, ‘you’ve given me a great education of ages’. It’s been tough and we’re going to get back at you in kind of a fun way. I think that was their way of showing their respect and their admiration for Mr. Florio.”

Florio was a hero around campus with a personality and reputation so important that he refused to take yearbook photos. M-A yearbooks after 2005 have no trace of him. Everyone already knew who he was anyway.

M-A Health Clerk Tonya Edgington said, “M-A was not the same when he retired. The world is a little less full with him gone.”

May we all strive to cultivate Florio’s spark and wit moving forward.