Is the SAT Actually Racist?

This is the first article in a two-part series on the debate about standardized testing and race. You can read the second article here.

“I believe this test is a racist test, there’s no two ways about it,” said Jonathan Sures, a University of California (UC) Regent. He was one of 23 members on the UC Board of Regents who voted unanimously in 2020 to suspend the UC’s use of SAT and ACT test scores in admissions, a decision which they made permanent last semester. The UC’s decision reflects national debates about test scores in college admissions, and is particularly consequential for M-A as more than half of our students stay in California for college, with many going to the UCs. But how can a standardized test be racist? 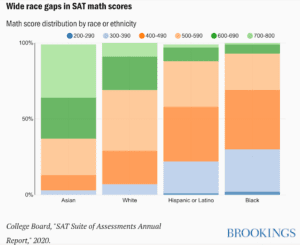 These disparities are particularly notable in the SAT math section.

M-A, which had an average SAT score of 1274 in Spring 2019, scores better than the national averages. Still, Mai Lien Nguyen, one of M-A’s college counselors, said, “When I’ve seen M-A scores broken down by race/ethnicity, they show a similar trend [compared to national data] of racial disparities.” 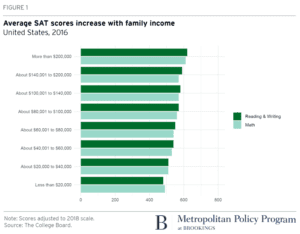 The ACT, while scored differently, sees similar score disparities between demographics as the SAT.

The disparities in test scores by race and income are clear, but there’s disagreement over their cause: are they a continuation of larger disparities in educational opportunities? Or is there something about these standardized tests specifically that fosters inequality?

Researchers like Jay Rosner, an expert on college admissions tests and executive director of The Princeton Review Foundation, have used “item-level data,” or data on how students around the nation and in different demographics did on particular questions, to look for skews. In pre-screening, when questions were tested before being put into official exams, they found that questions in which white students outperformed Black students were more likely to be chosen as questions for the actual SAT than questions on which Black students outperformed white students. 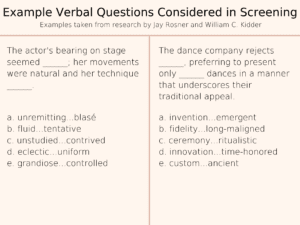 These are two questions testing similar content and skills which were both considered for the 1998 SAT. The question on the left (C is correct) had 8% more African American students answering correctly than white students. This question was discarded and never appeared on the actual SAT. The question on the right (D is correct) had 24% more white students answering correctly than African Americans, and was ultimately chosen to be part of the SAT.

Part of the problem is that test scores need to be consistent from year to year, so when choosing new questions, test-creators make sure that the people who historically did well on the SAT keep doing well on the SAT. Rosner wrote, “Each individual SAT question [the Educational Testing Service] chooses is required to parallel the outcomes of the test overall. So, if high-scoring test-takers—who are more likely to be white—tend to answer the question correctly in pretesting, it’s a worthy SAT question; if not, it’s thrown out. Race and ethnicity are not considered explicitly, but racially disparate scores drive question selection, which in turn reproduces racially disparate test results in an internally reinforcing cycle.”

He added, “Girls score lower than boys on math, and black students score lower than white students. So if, on a particular math question, girls outscore boys or blacks outscore whites, it has almost no chance of making the final cut. This process therefore perpetuates disparities, virtually guaranteeing a test that’s ultimately easier for some populations than others.” 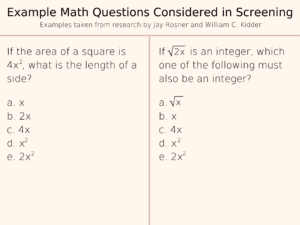 However, the College Board stopped releasing item-level data in 2000, so research by independent parties to examine whether questions are fairly chosen is no longer possible; Rosner’s argument is based on data 22 years old or older. Still, analysis of tests up until the October 2000 SAT—the last exam for which this data is available—still found skews in a substantial number of questions: “In all, 13 of the 60 math questions on the October 2000 test had large skews favoring boys over girls, and 22 of 60 had large skews favoring whites over blacks.” This is taking into account differences in overall question performance (such as which questions have more total students answering correctly or incorrectly). While the average test question already has some skew in favor of boys and white students, for many questions, that difference was even more pronounced.

When asked to comment on Rosner’s research, the College Board, the company that authors the SAT, explained that questions undergo careful analysis for possible cultural bias before they’re approved. A representative said, “All questions included on the SAT have been pretested and subjected to multiple reviews by K-12 and postsecondary educators and other experts review each question multiple times. Any question that appears to give an unfair advantage or disadvantage to any group of students, e.g. by gender, ethnicity or race, is thrown out.”

Rosner said that if large-skew questions were no longer showing up on the SAT, “we’d probably have seen at least a small change in girls’ and black students’ scores relative to boys’ and white students’ scores. We haven’t.”

Still, the more common view is that differences in SAT/ACT scores are not caused by unfairness within the tests themselves, but rather, caused by disparate educational opportunities leading up to taking the test. This includes the resources and opportunities available to students from elementary through high school education and access to test prep. Nguyen said, “While I can’t be a judge of how culturally biased the questions are today, I think the racial disparities are most likely a reflection of unequal educational opportunities.”

The College Board representative said, “We recognize real inequities exist in American education, and they are reflected in every measure of academic achievement, including the SAT and other standardized assessments. Performance differences across groups of students reflect an unequal K–12 system.”

The majority of students nationally live in “racially concentrated” school districts; as school segregation has only increased, the racial makeup of schools often correlates to its funding and resources. In 2016, for example, predominantly white districts nationwide had about $2,200 more funding per student than nonwhite ones.

Saul Geiser, a research associate at the University of California, Berkeley, added, “Race matters as much as, if not more than, family income and parents’ education in accounting for test score differences.”

“Statistically,” Geiser continued, “being born to Black or Latinx parents is as much of a disadvantage on the SAT or ACT as being born to poor or less-educated parents.”

While the cause of skews in test scores today is highly debated, the SAT’s racist history is hard to deny.

Carl Brigham, one of the primary creators of the first SAT in 1926, had originally created the test during World War I for the U.S. Army, which used standardized test scores as well as race to place soldiers in segregated units. Brigham and college officials often viewed race and aptitude as connected, and saw these tests as a way to limit the admission of students of color to selective universities.

In 1923, Brigham wrote, “The decline of American intelligence will be more rapid than the decline of the intelligence of European national groups, owing to the presence here of the negro.” Brigham considered the SAT a “public action” to prevent people of color from entering American educational institutions and the “intermingling” of races.

Rosner said, “The SAT is actually a eugenicist dream, a white supremacist dream. And if people viewed it through that lens, it would be way less popular.”

There’s disagreement on whether standardized testing has truly moved beyond its racist beginnings. A College Board representative maintained, “The SAT is not a racist instrument. Changes made to the test over its 100-year history have removed all vestiges of an aptitude or ‘IQ’ test.”

Rosner countered, “Brigham later renounced eugenics, but it didn’t change the test.” While the SAT and the kinds of questions it uses have changed over time, Rosner said, “It’s not about the appearance of the questions—it’s about the results. And the results have the same disparities as they’ve always had.”

*While it is M-A Chronicle standard to use “Latinx,” this article uses “Hispanic” when source materials did as well.

Read the second article on this topic here.