Since M-A has the day off of school, we have an opportunity to pause and reflect on the perspectives and cultures of the Indigenous and Native American people in our community. 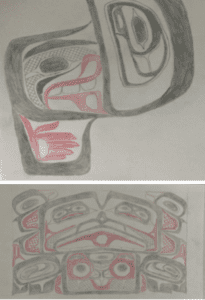 Some of Patrick’s Drawings from her Formline art class

Senior Anna Patrick is a member of the Aleut Native Alaskan Tribe. Her great grandmother lived in a tribal community on the Pribilof Islands, a group of four small volcanic islands off the coast of mainland Alaska. She said, “Indigenous Peoples’ Day is important to me because it helps reframe the typical narrative that glorifies people like Columbus and recenters focus on communities hurt by colonialism.” A few years ago, Patrick took a class on Formline art and learned how to draw in the traditional style of the Aleut tribe. 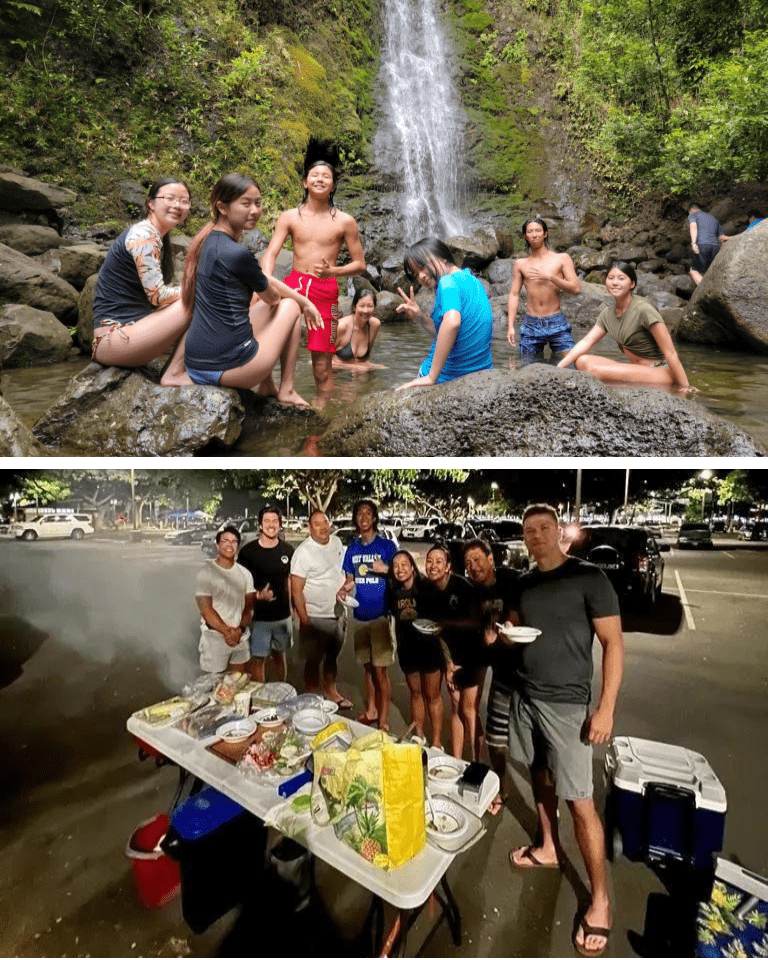 Lee with his family in Hawaii

Senior Kilikiano Lee is Kanaka Maoli, or Native Hawaiian. His family is native to the Hawaiian island of Oahu. Lee said, “One way I feel tied to my heritage is that my siblings and I all have traditional Hawaiian names. My sister is named Kealohilani and my brother is named Kanoa.” Lee travels to Hawaii every year to visit his extended family. He said, “I like the switch from Columbus Day to Indigenous peoples’ day, I think it’s a step in the right direction.” 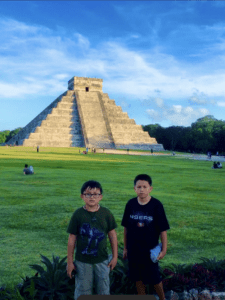 Senior Dominik Rodas’ family is Mayan, from the Yucatán peninsula in Mexico. His grandmother and aunt are fluent in the native Mayan language. He said, “I speak Spanish at home, but we also use some Mayan phrases. For example, my grandma lives right next door to us and sometimes in conversations with her when I say ‘¿Qué?’ in Spanish, she answers, “Keh, en el monte se ve,’ or ‘Deer, you see them in the mountains.’ It’s a play on words because qué means ‘what’ in Spanish and ‘keh’ means ‘deer’ in Maya and the two words sound very similar.” Rodas said, “I am happy about the decision to rebrand Columbus Day as Indigenous Peoples’ Day. I think it is important to recognize Indigenous groups and celebrate their histories and traditions.”

M-A alumni have gone on to make a difference by spreading awareness about the issues that modern Native American tribes face. 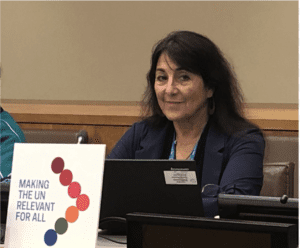 Carmen at a UN Convention

Andrea Carmen, class of 1968, is the director of a UN Native American rights committee (See full interview in Bears Doing Big Things). Carmen is a member of the Yaqui Nation, a tribe located on the border between Arizona and Mexico. Her grandmother was born in Northern Mexico and survived a massacre by the Mexican army when she was 12 years old.

Carmen remembered, “In my fourth grade class, we learned about California history. We made little models of the missions and put on an end-of-the-year class play. One boy had a brown robe and a ring and he was playing the missionary Junipero Serra. I was the only Native American in my class. I had long braids. My job in the play was to kneel before Junipero Serra and kiss his ring and I was assigned one line: ‘Thank you father for bringing us God.’ I was 10 years old—I didn’t know the full extent of the history or politics—but I just knew I wasn’t going to stand for this. I threw a baseball at my teacher’s head. This was during the last week of fourth grade. I wouldn’t go back to school, I told my mom I had appendicitis and I refused to perform in the play. So, I guess you could say that’s how I got into Native American advocacy.” Carmen is now the executive director of the only Native American rights group with general consultative status at the UN. Her committee produces educational materials for high school students, like this study guide and this message for Indigenous Peoples’ Day.

Carmen has been involved in the movement to celebrate Indigenous Peoples’ Day instead of Columbus Day for over 40 years. In fact, she was arrested at an Indigenous Peoples’ Day protest in 1986. She explained, “Italian immigrants were reenacting Columbus’ arrival at an event in San Francisco and I was there protesting as part of a Native American group.” Critics of Columbus Day, including Carmen, argue that the holiday does not celebrate the discovery of America, but instead glorifies the mass genocide of Native Americans at the hands of European explorers. Many Italian immigrants, on the other hand, view Columbus Day as a celebration of their heritage since Columbus was Italian.

Carmen continued with the story of her arrest, “The police told us we had to leave and they confiscated our banner. They took us to a federal holding cell underneath Fort Mason. We had to fill out a form and had two choices to fill in our race: ‘Black’ and ‘White.’ We weren’t sure what to put, considering that Native Americans don’t really fall into either category. They made us choose one, so we put Black. When we went to court, the judge kept looking at the form like, ‘Are these the right defendants?’ A lot of Native Americans were listed as White on forms back then. Eventually, we were released with no charges.” 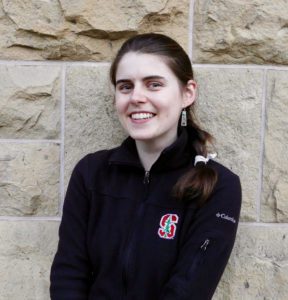 Another alum, Anna Quinlan, class of 2019, is Cherokee and will graduate from Stanford University with a degree in Computer Science this spring (Full interview to come in Bears Doing Big Things). Over the past few summers, she has worked for both Microsoft and Apple. Quinlan is involved in an Indigenous at Apple group and helps lead the Stanford division of AISES, the American Indian Science and Engineering society. Quinlan said, “There aren’t a lot of Native people in STEM fields, and engineers have a lot of power when they build algorithms. Software engineers’ decisions can unintentionally amplify bias and make the technology feel like it wasn’t designed for users from different backgrounds. For example, a Facebook algorithm didn’t consider Indigenous last names.” (Learn more about this issue here). Quinlan continued, “I think it’s really important to expand diversity in high-level STEM fields so the technology we build can be inclusive to as many people as possible.” 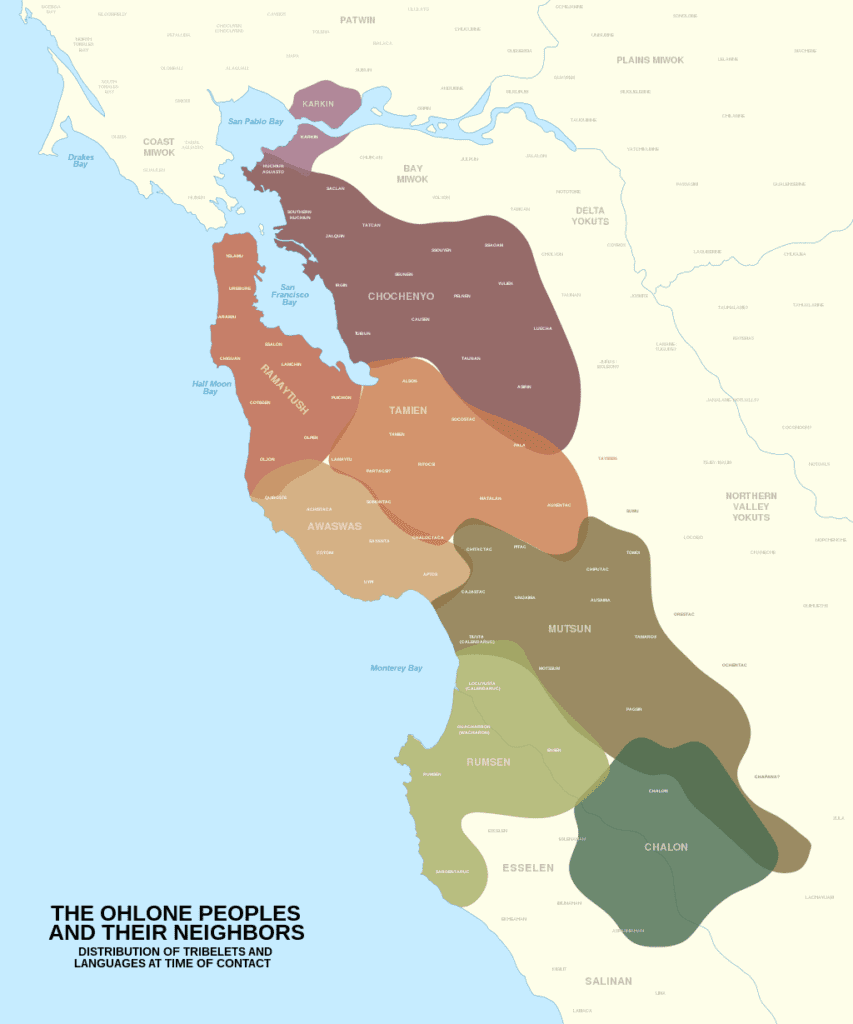 Map of the Ohlone Peoples and their Neighbors. Image Credit to Randall Milliken.

The very site where we go to school is another fundamental connection between the M-A community and Native American history. The land of our campus used to be populated by the Ohlone tribe, who inhabited Menlo Park and the San Francisco peninsula for thousands of years (~700 C.E. through the late 1700s). Before the arrival of the Spanish, the Ramaytush Ohlone numbered thousands of people. However, by the end of the Mission Period, only a few surviving families remained. Only one lineage is known to have produced descendants who are alive today. Check out these student resources to learn more about Ohlone traditions and heritage.