Hispanic Students Say What Their Culture Means to Them

Hispanic Heritage Month, or El Mes de Herencia Hispana, was initially introduced by Congressman George E. Brown in 1968 as a week to commemorate the contributions of the Hispanic and Latinx communities to America. It was eventually expanded to a month in 1988 after a proposal by US Representative Esteban E. Torres, who wished for more time to “properly observe and coordinate events and activities to celebrate Hispanic culture and achievement.”

This month shines a light on the Latin American communities in the United States. It honors the history, culture, and influence of Latinx and Hispanic communities. More than 40% of the M-A student body is Hispanic, a fraction whose heritage spans many nations. Therefore, it is incredibly important we shine a light on these students’ diverse experiences with their culture, from memories with foods to songs, family, and even language. The M-A Chronicle asked Vianca, Angel, Jorge, and Samira, Hispanic students from Angelica Rodriguez’s AP Spanish for Native Speakers class about a particular aspect of their culture and what it means to them. These stories were written with the gracious help and suggestions of Maribel Maldonado.

For senior Vianca Lopez, coming home from school to a steaming plate of enchiladas michoacanas is the definition of comfort. “I’m not sure how to fully describe it,” Lopez said. “It’s a wet tortilla, filled with onions and fresh cheese—queso fresco. And then, we put the toppings on it—sour cream, lettuce, salsa. On the side, it always comes with fried potatoes, carrots, and chicken wings.”

Lopez’s mother is from Guatemala, and her father is from Sinaloa, Mexico. “My mom went to my dad’s culture and brought something out of it,” Lopez said. “He used to eat it when he was younger, so it reminds him of back home.”

“My mom makes it even though she’s not part of that culture. It’s like a stepping stone because it’s bringing my siblings and me into the same happiness my dad has when he is eating the dish.” 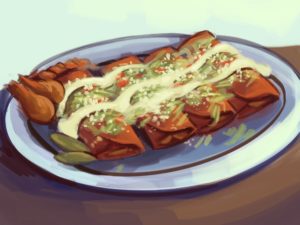 For Lopez, enchiladas michoacanas serve not just as a reminder of her own mixed Guatemalan and Mexican heritage, but also special moments with her family.

“Ever since I was young, I never liked eating traditional meals because I was so used to eating American food,” Lopez said. “So when my mom asked me what I wanted to eat for my birthday, this one time I actually asked for a traditional meal, the enchiladas michoacanas. Eating it with my family was a meaningful moment for me.”

When Lopez eats the dish, she is immediately reminded of her father. “I don’t really see him often because he’s always working. When my mom makes it, even though he’s not there, it just makes me feel as if part of my dad is with me.”

If you want to make your own enchiladas michoacanas at home, here is a recipe! 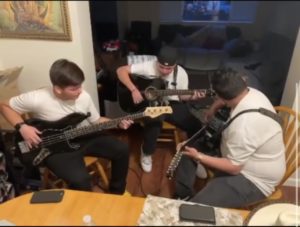 As the lead singer of his band, Los Hermanos de Oro, junior Angel Lombera takes great pride in his music. He and his band play a lot of Mexican regional style, have performed several times at M-A, and even won Battle of the Bands last year. “That’s the way I like to express myself, my culture, and the way I was raised,” Lombera said.

Lombera and his band members play covers and write their own songs, using music as a medium to express their feelings. “When we go through things, happy or sad, we just write it down,” he said. “If we feel enough about it, or a certain way about it,” slowly, it turns into a song.

“The best part is when people sing along to what you’re saying,” Lombera said. He talks about the indescribable feeling of seeing his community come together because of his playing.

Los Hermanos de Oro also connects Lombera with his family. “My dad’s from Michoacán, and my mom’s from Jalisco. They met here, in Redwood City.”

In the beginning, Lombera’s father bought equipment for Los Hermanos de Oro when he and his bandmates couldn’t. “We didn’t have the money, but he did,” Lombera said. “Because he worked hard, and wanted us to pursue our dreams.”

“My dad wanted me to grow up with the things he didn’t have as a child,” Lombera said.

Through his music, Lombera also feels closer to his grandfather. “He and I are the only people in our whole family who play music,” Lombera said. His grandfather plays the violin. “I have a lot of love for my grandpa because he’s taught me a lot of things.”

“I like his style,” Lombera said. “I feel like what motivates me is to be like my grandpa, if not better.” Lombera often plays at house parties with his band, and sometimes, his grandfather is there. “He’s really, really old, so when he sings, it’s nice to see that he still has it in him,” Lombera said. “We sang a song together in front of a lot of people once, and it just felt really nice.”

Jorge Lopez: My trip to Sinaloa and fresas con crema

During the winter of 2020, senior Jorge Lopez traveled back Mexico with his family not just to visit relatives, but also to focus on himself. To Lopez, visiting his family’s hometown of Sinaloa, Mexico, was almost like an awakening. 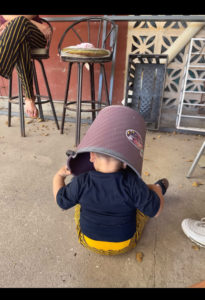 Jorge was in charge of taking care of his younger cousin whenever he was home.

For the next three months, Lopez’s schedule looked like this: wake up at five, go to the gym for three hours, come home, log on to school, log off, babysit his cousin, go to boxing training, and then go to baseball practice.

“My mentality shifted completely because I didn’t go over there to visit or sightsee. I went over there to work on myself,” Lopez said. “I weighed 180 going to Mexico, and I came back weighing 160. I had lost 20 pounds while I was there.”

Lopez’s experience in Mexico also allowed him to reflect on his own life. “Before living in Mexico, life in America was all I had ever known,” he said. “I feel like we take a lot for granted here.”

Lopez was able to better understand his identity during his time in Sinaloa. “It was the first time I felt like I was part of a majority,” he said. “But even though I understood everything, I still felt completely alien.” 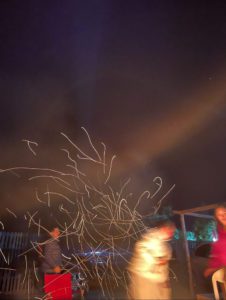 Camping at night with family at a beach in Sonora.

Lopez’s most riveting memory was his first meal in Mexico—fresas con crema—as he and his family drove home from the airport. Passing through the fields, they had come across a farmer’s stand. “He was selling strawberries because he had just picked them,” Lopez said. “And they served it con crema [with cream]. It was so good. I loved it.”

As he ate fresas con crema by the side of the road with his family in the blazing heat of Mexico, reality struck Lopez. It was his first real taste of Mexico. 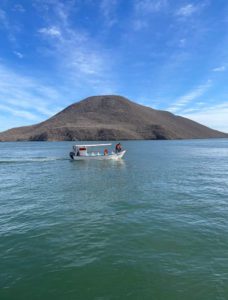 He elaborates, “Even the fruits will never taste the same. The strawberries, mangoes, and guavas in Mexico are way better than the ones here. Even crossing the border and going onto the street, everything looks so different.”

“I felt like I was transported into a different world,” Lopez said. “Everyone’s so much more open. Even on the airplane, I spent the whole time talking to the lady sitting right next to me.”

“As a Mexican-American, you don’t really feel like you completely belong to either side. And I still don’t feel fully Mexican or American, but going back, I felt a lot more connected. I really got to understand my roots and why my family is the way it is.”

The first lines of the song, “Ven Porque Te Necesito,” a romantic 1996 Mexican ballad, are just one of the many lyrics that bring sophomore Samira Menjivar back to her childhood.

To Menjivar, these songs are more than just timeless memories, but also reminders of the beauty of the Spanish language and her Salvadorian-Mexican culture. “It’s just the songs that you hear around the house,” Menjivar said. “Your parents know them because their parents played it when they were little, and it’s something that gets passed down from generation to generation.”

When Menjivar was younger, her parents would play these songs in the house. “I always got kind of annoyed,” Menjivar said. “Now that I’m older, these songs are growing on me, and I actually really like them.”

Menjivar now begins to realize the value and meaning of these songs to her. “The language that comes with the songs is also passed down through generations,” she said. “Our language is what ties us to our culture.”

Listening to the songs now, Menjivar can only describe her feelings in one word: nostalgia. “Every time I hear the song, I just remember all the times I’ve heard it before, as a little kid,” she said.

One time, Menjivar’s parents played “Ven Porque Te Necesito” during their drive to visit her grandparents in Mexico. “I was like, ‘Oh no, not this again,’” Menjivar said. “But then it grew on me. The same time next year, I was singing along to the lyrics super loudly.”

Menjivar mentions her father, who immigrated from El Salvador in 1992, and her mother, who was born in the United States to Mexican immigrants. “It’s a bit frustrating sometimes because you can’t just say, ‘I’m Mexican.’ Because there’s this Salvadorian part of me as well,” Menjivar said. “It wasn’t until I was older that I realized I was Latina, I’m half, I’m mixed. I think I just got the best of both worlds because you get older cultures.”

“Everyone in my family speaks Spanish, and all of the kids I know out of school speak Spanish too,” Menjivar said. “There’s something unique about our language. Growing up speaking Spanish, you know some certain phrases or words, and being able to communicate with other people with my language is just something that I really, really enjoy.”

Being able to learn Spanish at school with other students is equally fulfilling for Menjivar, and she finds pride in her Spanish for Native Speakers class. “You get to learn in a different way and focus on different aspects,” Menjivar said. “I love my teachers here. We get to listen to songs and watch shows in Spanish, and that’s something that also connects us.”