The M-A Bears went toe-to-toe with the Menlo Knights in their annual Homecoming game this past Friday night, overcoming early woes to come out on top at 24-14.

M-A students came out in full force for the game, wearing all white clothes for the white-out theme, and covering themselves in red powder during key moments in the game. Fans were especially excited to face a newer cross-town rival, and brought the extra spirit for the game. 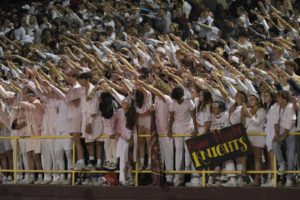 Whiteout-themed student section waves goodbye to the Knights in the final moments of the game. Photo by Uliana Orlova

Senior kicker Dash Franklin echoed the sentiment, “I think we came out with a lot more intensity than we normally do, and we got the job done.”

M-A didn’t start off the game at their best offensively, struggling to score on their first few drives. They committed a handful of penalties that halted the offense, which stopped them from gaining yardage early on.

However, defensively, the Bears were ferocious from the start. They had an early sack that pinned Menlo deep in their own territory, by senior defensive end David Tangilanu.

On the Bears’ ensuing drive, the offense could have had a couple of big gains, however another flag, this time on holding, derailed that drive. The score remained 0-0 after the first quarter.

Once the Bears made their next defensive stop, the offense got into their rhythm. Junior running back Jordan Masuisui broke off runs of ten and 23 yards, followed by a run from senior Sherrod Smith from four yards out to put M-A up 7-0 with 5:53 left in the second quarter.

On Menlo’s next drive, the Bears stayed strong and the Knights committed a penalty when planning to go for it on fourth and two, causing a punt and giving the Bears the ball back with just two minutes left in the half. M-A quickly drove down the field and would have converted a 44 yard Masuisui touchdown until a penalty shortened the yardage to 24, putting the Bears directly into field goal range. Then, Franklin made a 35 yard field goal to extend the lead to 10-0 with 1:01 to go in the half.

As the clock winded down, with only 33.2 seconds left, the Bears made a huge play, recovering a fumble on Menlo’s half of the field. Franklin attempted a 47-yard field goal but came up short in the final seconds to halftime.

During the half, students sang along to the M-A Band’s rendition of ‘Sweet Caroline’ and enjoyed the riveting performances from the dance and cheer teams, including songs ‘Gold Digger’ and ‘Runaway Baby.’

Once Menlo got the ball to start the second half, the Bears committed three more penalties to give the Knights better field position. The Knights converted with a two-yard touchdown rush, cutting the Bears’ lead to three points with 6:48 left in the third quarter.

M-A felt the heat, and the offense quickly got back to work. Junior Owen van Loben Sels recovered an onside kick, immediately leading to a 48-yard touchdown run by Smith to make the score 17-7 with 5:57 to go in the third quarter.

After a failed Menlo drive, the Bears put the game out of reach with another Smith touchdown, this time for 32 yards, extending the M-A lead to 17 points with 4:15 on the clock in the 3rd quarter.

Both defenses traded blows, keeping the score the same until a garbage-time Menlo touchdown changed the score to 24-14 with only five minutes left in the game, but the Bears ran the ball to run the clock down to win it.

M-A’s student section erupted with the victory, rushing down the stands to join the team on the field in jubilation.

Next Saturday afternoon, the Bears go on the road to play the Sacred Heart Gators at two p.m. The Bears record improves to 5-3, and 3-1 in Peninsula-Bay Division League Play.