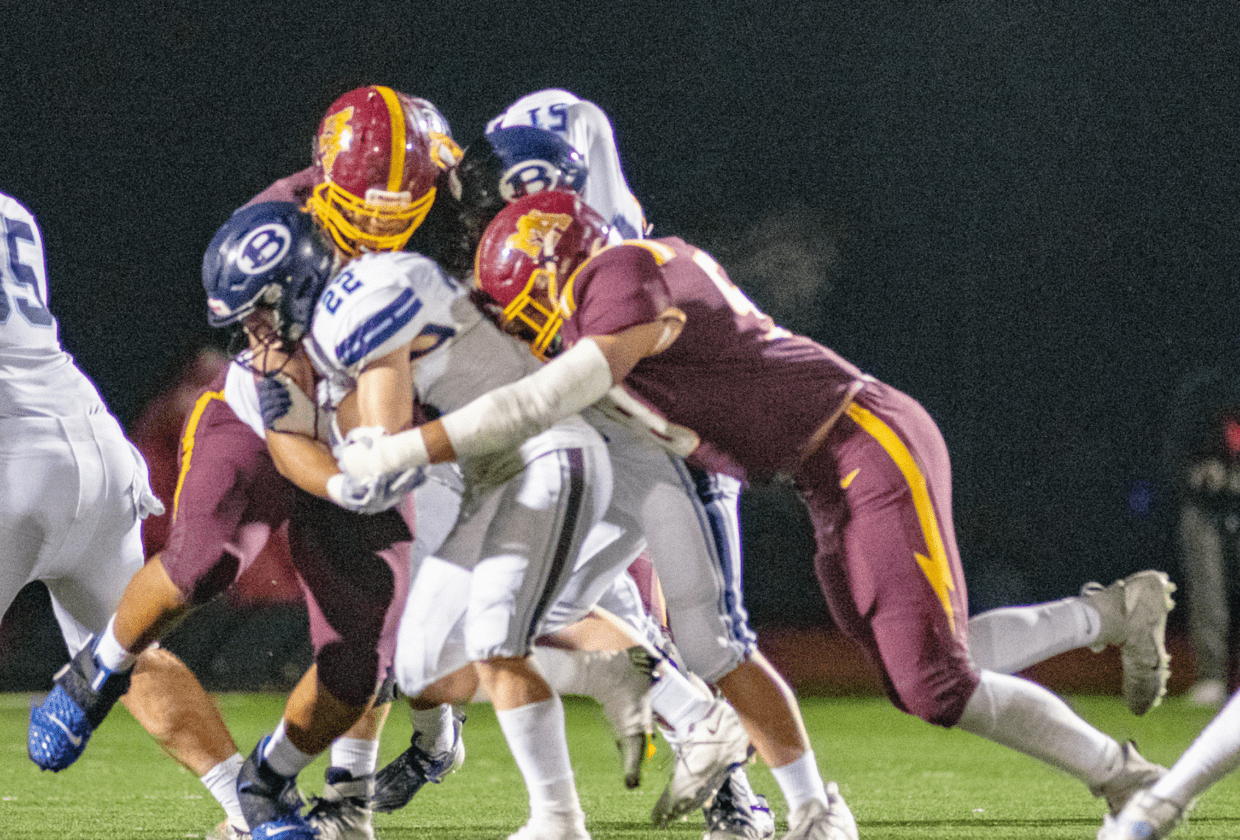 The Bears suffered a devastating loss to the Bellarmine Bells by a score of 30-7 in the first game of the CIF Division II Playoffs. This decisive game ended the Bears football season with a record of 5-6.

Despite the loss, the Bears put forth a valiant effort. The first quarter was packed with tackles from linebackers Devin Hyde and Diego Agustin unveiling the Bears’ fierce defense. However, the Bells’ offensive line remained persistent and the Bells scored a touchdown with six minutes left in the quarter, putting them up by 7. 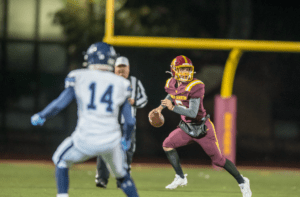 Still, Senior quarterback Colton Assuntos’ strong passes throughout the first quarter showcased his pragmatic ability to scan and read the field quickly. Senior running back Jacob Wilcox said, “I ran a comeback and saw Colton leaving the pocket, so I sat it down a little early and he threw a good ball where I can keep both my feet down and take a hit.”

The first quarter ended with the Bells up 7-0, but with more aggression on defense from the Bears with a sack from junior free safety James Gray. Despite the deficit, the energy only went up in the second quarter after securing the first down with two deep passes from Assunto, giving the Bear’s impressive yardage.

Less than a minute after a brief injury timeout from the Bears, the Bells scored another rushing touchdown, throwing the Bears off their game. Senior wide receiver Cameron Johnson explained, “The strategy that we used wasn’t 100% right, and we were just out of position sometimes.” 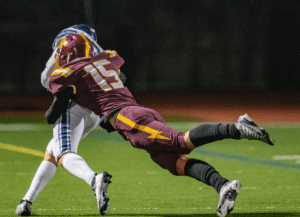 After the Bells sacked our offensive line, the Bears showcased their defensive grit with a tackle from Gray on Bell’s quarterback, quickly halting him from scoring another rushing touchdown. Gray had ten tackles throughout the game. Junior defensive end Khayri Jett was also a major defensive factor and completed an impressive interception from the Bells.

Throughout the game Bellarmine’s weakness was dangerous fouls, as they received two important flags back to back in the second quarter alone. However, Assunto took risks with varied through passes and junior tight end Alek Marshall and senior wide receiver Jayden Moss completed most of them but still struggled to get past the aggressive Bellarmine defense.

Then, with 6 minutes left in the second quarter, the Bells scored another touchdown, making it a 14-0 deficit for M-A going into halftime.

The third quarter started off strong with senior wide receiver Kameron Hawkins’ running an impressive 20 yards from the kick off return. Hawkins later attested, “During that play, all I was just thinking about was the score.” Shortly after, senior running back Sherod Smith came down the middle for a small gain for the bears’ first down. 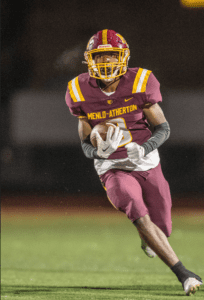 Wide receiver Sherrod Smith with a rushing touchdown for the Bears. Photo by Bob Dahlberg

Just two minutes into the third quarter, Smith broke through for an incredible 30 yard rushing touchdown, cutting the Bear’s deficit to just seven points. Smith kept the energy up through the rest of the quarter by gaining yardage every time he touched the ball. Smith averages a whopping 100 rushing yards per game and has had 13 touchdowns this season.

The Bears defense remained ferocious in the second half with an impressive tackle from senior defensive end David Tangilanu pushing the Bells back a few yards. Then, on the Bell’s first down when a Bellarmine running back drove the ball, Gray tackled and stopped him in his tracks. Bell’s wide receiver Musa Sikaffy said, “The best play of the game had to be the 30 yard run during the 3rd down in the third quarter.”

Still, the Bells knew how to rack up points and furthered their lead with a field goal with six minutes left. Junior running back Jordan Masuisui completed an aggressive tackle on the Bells, keeping them from another touchdown, and ending the quarter 17-7 in favor of Bellarmine.

At the start of the fourth quarter, the Bears were hopeful with junior wide receiver Jayden Monroe receiving a 60 yard pass from Assunto, leading to an immediate timeout from the Bells. However, the quarter proved to be truly devastating when Bellarmine fed off of their lead and scored another rushing touchdown just three minutes in, but missed their point attempt after, upping the score to 24-7. 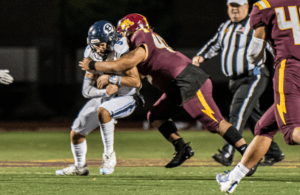 Junior running back Jordan Masuisui with an aggressive tackle. Photo by Bob Dahlberg

The Bears continued their fight but it ultimately was not enough to come back. The Bells scored again with six minutes left, with a rushing touchdown and a good point after, putting them up for a final score of 30-7. The game ended with safe running plays since both teams knew it was over.

As the seconds counted down, the announcer wished the Bells good luck in the playoffs. Seniors grew emotional, given it was the end of their last game on the M-A field, ever.

Afterwards, according to Hawkins, “The vibe in the locker room was really sad and everyone was really quiet.” Wilcox also added, “It was hard we were just looking through the game and talking about what happened and what could’ve happened and how the outcome should’ve been better.”

Senior kicker Arya Agah shone light on head coach Saunder’s post game speech. Agah said, “During our speech he used the game as an example for the juniors, that a divided locker room can really have an impact on a team. Moving forward everyone now knows that the chemistry on the team is super crucial, because no matter how talented a football team really is, it takes everyone and a divided team is no longer a team.”

Regardless, the team should be proud of how far they’ve come and that they qualified for playoffs. Johnson leaves with a positive sentiment, “I think we all did good and we all are MVPs because we all put 100% effort in.”

The departing seniors look forward to supporting the juniors next year, and Wilcox said, “I hope all of the juniors come back from this season with a chip on their shoulder and work hard, just like we did this year.”

Agah agrees, “Hopefully the juniors take the season with a grain of salt and don’t make the same mistake the seniors did this year. I wish them the best of luck.”