On Friday night, the Bears dominated the Aragon Dons with a score of 27-7 in front of their spirited home crowd.

The Bears started off strong, swiftly moving the ball down the field on their second drive with big runs left and right. Junior running back Jordan Masuisui broke off a 35-yard rush, helping to set up an M-A field goal by senior Dash Franklin to put them up 3-0 with 3:34 to go in the first quarter. 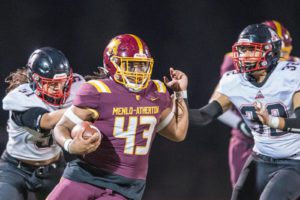 Masuisui breaks off a big gain early in the first quarter. Photo by Bob Dahlberg.

Aragon ran the ball relentlessly on their opening drive, but when they had to throw the ball on 3rd down, sophomore linebacker Devin Hyde made it into the backfield to sack the quarterback, pushing the Dons out of field goal range.

After the game, Hyde said, “Every play, I wasn’t thinking about what happened last time, I was thinking, ‘yeah I made that sack, now I’m going to make that play again.’ I wasn’t dwelling on the past, and I kept putting my heart on the field.”

On their ensuing drive, the Bears rumbled down the field, until the game stopped briefly due to a referee injury. It appeared that one of the referees fell onto his back, and injured himself in the middle of a play. Once the game resumed, the Bears scored on a 4-yard pitch to senior running back Sherrod Smith, making the score 10-0 with 9:48 to go in the second quarter.

Smith said, “We just wanted to run the ball, our run game has been really dominant and we’ve just been wanting to capitalize on that all year.” 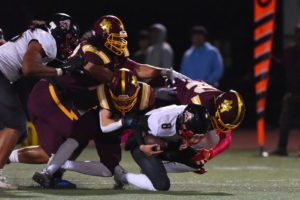 After another defensive stop, senior quarterback Billy Johnson connected with senior wide receiver Johno Price on a slant route that Price took all the way down to the Aragon 6-yard line, a gain of 36 yards. Smith punctuated the quick drive with a 6-yard run to put the Bears up 17-0 with 2:04 remaining in the half.

With time winding down in the half, Hyde got another sack, forcing Aragon to punt and giving the Bears a chance to put up more points before halftime. Johnson made two quick passes to junior tight-end Alek Marshall near the sideline to stop the clock, and completed another one to senior running back Jacob Wilcox to give the Bears a chance at a field goal, which, unfortunately, flew just to the right of the post.

During halftime, a 17-year old Aragon senior cheerleader was catching a teammate when they fell on top of her, and required immediate medical attention. An ambulance arrived minutes later. Sources indicate the cheerleader didn’t sustain any significant injuries. Due to the delay, the M-A dance and cheer teams did not perform during the break.

In the second half, the Bears continued their rushing attack, remaining relentless on defense and staving off Aragon while taking time off the clock. M-A only allowed one touchdown in the second half, while tacking on a Masuisui rushing-touchdown and a Franklin field goal.

After the game, quarterback Billy Johnson said, “We are actually building some momentum after a bit of a rough spot. I’m looking forward to crushing Menlo next week. We are gonna embarrass them.”

M-A moves to a record of 4-3 on the season and 2-1 in the Peninsula-Bay Division. They will play their homecoming game against the Menlo Knights next Friday, October 21st at 7 p.m.