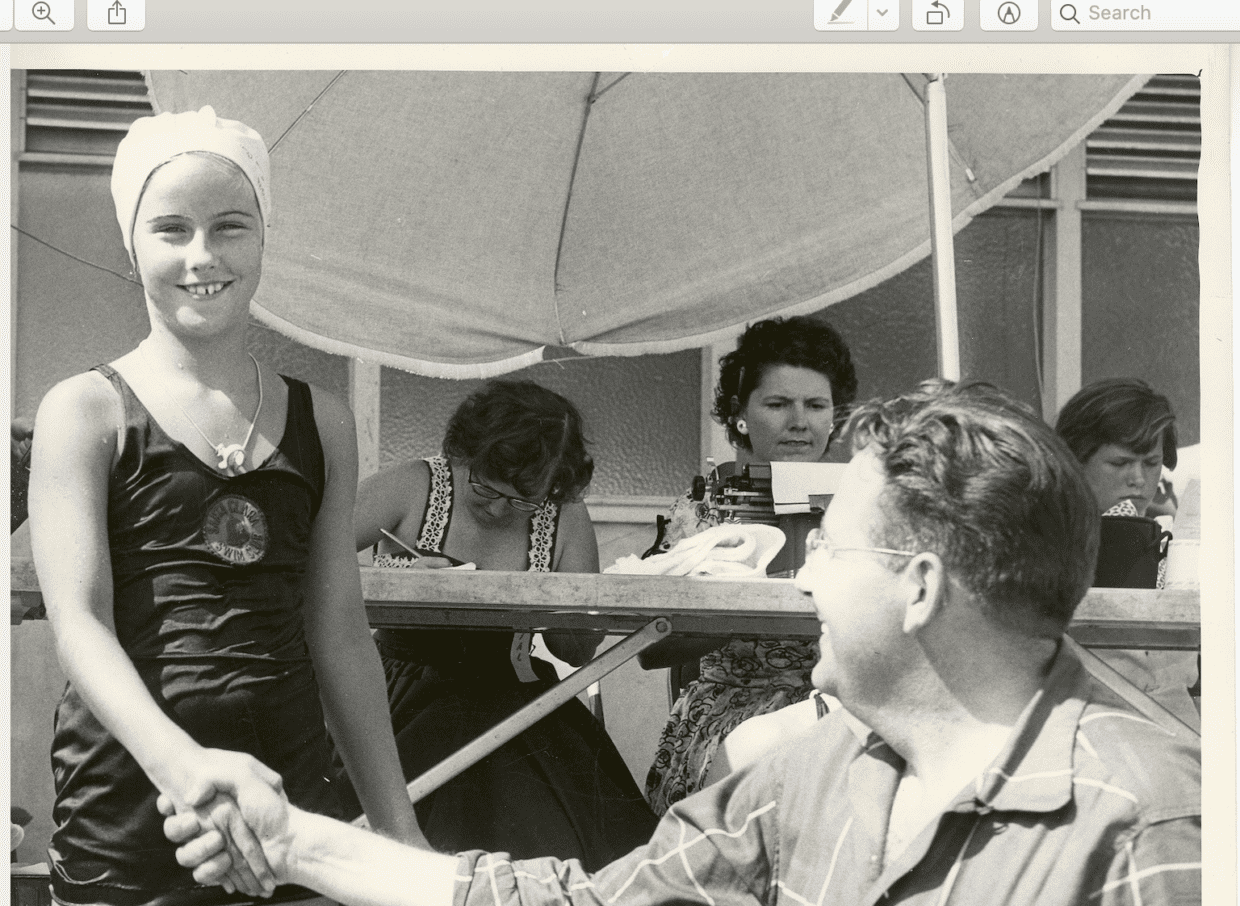 This is the first article in Bears Doing Big Things, a weekly column celebrating the stories of notable M-A alumni.

While most of her classmates worked summer jobs or went on family vacations during the summer after sophomore year, Anne Cribbs competed in the 1960 Rome Olympic Games. She placed sixth in the 200m breaststroke event and won gold as part of the 4x100m medley relay team.

Cribbs’ memories from high school include purchasing the “best ever” maple bar filled donuts from the lunch area (perhaps a predecessor to the Donut Club), carrying around “some kind of balance weighted scale thing” in chemistry class, and visiting Foster’s Freeze, ice cream and milkshake shop that used to be on Oak Grove Avenue. M-A was an open campus at the time, so Cribbs and her friends often explored the surrounding areas during lunch breaks.

Cribbs swam for the Santa Clara Swim Club and M-A team. She remembered, “my teammates and I went to morning swim practice every day before school. Goggles weren’t invented yet*, so we swam without them. Every time the pool got chlorinated, we would show up at school crying with red eyes.”

During her sophomore year, Cribbs won gold at the Pan-American Games and broke the American record in the women’s 200m breaststroke event. When she returned home, she found a tumor on her leg. The doctors said that if it was malignant, they would have to amputate it. Cribbs’ coach was distraught because she was on track to make the Olympic team.

Her leg ended up being okay. However, in the midst of the crisis, Cribbs transferred to Los Gatos High School for her spring semester because of scheduling difficulties surrounding P.E. She explained, “I transferred because the M-A authorities told me I had to take P.E. because it was a requirement. I was put in a modified P.E. class with other injured kids. They wouldn’t budge, it was really frustrating.” So, Cribbs recovered and got back in shape. She competed for Team USA at the 1960 Rome Olympic Games and returned to M-A for her junior year.

As a female athlete in the 1960s, Cribbs was troubled by how devalued women’s sports were. After the Olympics, the men’s team toured Europe while the women’s team was sent home. At M-A, she remembered, “There was a big gym for the boys and a small gym for the girls. The girls’ gym didn’t have bleachers because people didn’t realize that anyone would want to come to watch girls’ sports.”

Cribbs went on to study Political Science at Stanford, but “retired” from swimming. Without Title IX, a law passed in 1972 prohibiting ​​sex-based discrimination in schools, there were no opportunities for her to swim at the collegiate level.

After graduating, Cribbs worked on the U.S. Olympic Committee, helped found the American Basketball League, a predecessor of the WNBA, and worked on the Parks and Recreation Commission for the city of Palo Alto. She coached swimming and her daughters’ soccer teams. These days, she enjoys gardening and fashion and still swims recreationally.

Cribbs’ advice to current M-A students: “To all the M-A girls out there: use your voice to speak up about things that you think aren’t right. Suggest ways to make things better. Be confident and practical. All of us have had a very entitled and really wonderful life in this area. We live in a beautiful place in a wonderful country with a lot of faults. All of us have a responsibility to make it better. Also, stay in touch with your classmates! A group of my friends from M-A, about 45 of us, still have an annual holiday lunch after all these years. It’s great fun.”

On her favorite books, Cribbs said, “My favorite books? Oh gosh, I have so many favorite books. During COVID, I was looking for escapism and I found a 21-book historical fiction series called the Aimée Leduc Investigations Series about a French private eye which was just wonderful!”

*Technically, goggles were invented in the 14th century, however, they were not used by competitive swimmers until the early 1970s. Learn more about the origins of modern swimming goggles here.

Caroline Pecore is a senior at M-A and in her first year of journalism. She enjoys writing about the M-A community and current events. Outside of school, she likes to row, read, bike, and draw.