Yung Lean’s “Stranger” may be his best album yet

Yung Lean has been a revolutionary since his emergence as a rapper at age 16. He created the absurd and hilarious Arizona Iced Tea “Sadboy” aesthetic that became widespread among American teenage boys. He cut lumber wearing a floral dress in his “Miami Ultras” video, and he performs at his shows with fake blood dripping down his face. He continues to expand his legend in “Stranger,” and it seems to be the first project that shows the real Yung Lean: his raw thoughts, unrestrained imagination, and piercing melancholy.

“Stranger” takes you into Lean’s curious mind — his music feels as if it transports you into his dreamy mythical world. Yung Lean himself said his music is “influenced by fantasy and nature and you know, finding like little elves in the forest, and… being in a Death Star in Star Wars, and just creating our own worlds.”

This album adds a new dimension to Lean’s magical style.

His previous album, “Warlord,” embodied Lean’s gothic and gloomy vibe. “Stranger,” however, is something completely different. “If ‘Warlord’ was going through the gates of hell, you would come out the other end into a garden and ‘Stranger’ is playing with medieval naked people laying in the garden,” Lean described.

However, Lean’s darkness is still very much there. Lean draws from gothic literature, including Edgar Allen Poe and Robert William Chambers. His track “Yellowman” is based on Chambers’ 1895 novel “The King in Yellow,”* *a collection of short horror stories featuring the supernatural world.

Lean’s lyricism spans serious grief and childlike whimsical fantasies. On “Agony,” Lean sings, “Take a pill and go to sleep, I’m chasing witches in the streets… Watching horses in the fields, the dragon rests in agony. When I’m afraid I lose my mind, It’s fine, it happens all the time.”

Lean reveals his raw agony in the chorus, “Isolation caved in, I adore you, the sound of your skin.”

His vulnerable, weak voice is backed by an Icelandic children’s choir, their voices wistfully fading into nothingness.

Lean is so lonely that he imagines interacting with inanimate objects: “A theater of ducks is still around, my furniture has come alive, I’m dancing with a candlestick tonight.”

His imagery and creativity are, in my opinion, more unique than any other rapper. 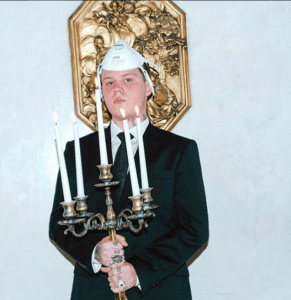 When asked about Stockholm, Sweden’s (Lean’s hometown) influence on “Stranger,” Lean described “being young and seeing snow and the days getting dark at three” and said that “there is this melancholic and dark vibe to Stockholm… I guess I show the raw side, my side of it.”

Lean’s producers, White Armour, Yung Gud, and Yung Sherman, are all from Stockholm too and have been producing beats with Lean ever since 2012. On “Stranger,” the producers borrowed heavily from emo and punk rock influences while favoring the Swedish style of blank space and minimalism.

On the track “Red Bottom Sky,” Lean reflects on the wholesome beauty of his surroundings, juxtaposing sunny imagery with gloomy thoughts. It has a more uplifting beat, but his voice has underlying tones of sadness.

On “Push/Lost Weekend,” which has significant Chief Keef influence, Lean’s auto-tuned voice perfectly complements the moody slow beat. “Snakeskin/Bullets” is a mysterious, ominous track with only eight lines. Lean sings, “Snow, desert, through the cold… I’m no good to love, not like I used to be.”

It is miraculous how much Lean conveys in such few lines. He sings slowly and in a monotone voice, stretching out his words to create an impactful mood.

From listening to all of Lean’s work in the past few years, I have realized that you cannot understand the meaning and moods of his songs from just the lyrics. In some songs, his lyrics seem so surface-level, but it’s the synergy** **between Lean’s verses and his producers’ beats that convey the full breadth of his songs’ meanings. He is perhaps making a point that words can only communicate so much.

On November 8, Lean released his short film “Stranger.” The film is quite bizarre, but this is expected from Lean, whose music videos often portray him as an afflicted soul in rustic, desolate areas. When watching “Stranger,” it’s difficult to understand what is going on. Lean appears at the beginning with a blood-covered face and does not speak during the entire film. In Lean’s words, the film goes as follows: “a fugitive turns into a demon then a sad clown and finally becomes a man again.”

Yung Lean has never sounded so honest, so vulnerable, and so pensive as he does in “Stranger.” He has come far from his “Ginseng Strip” days, his music only becoming more personal. I love the old Yung Lean and the new one — both have a legend unparalleled by any other rapper.