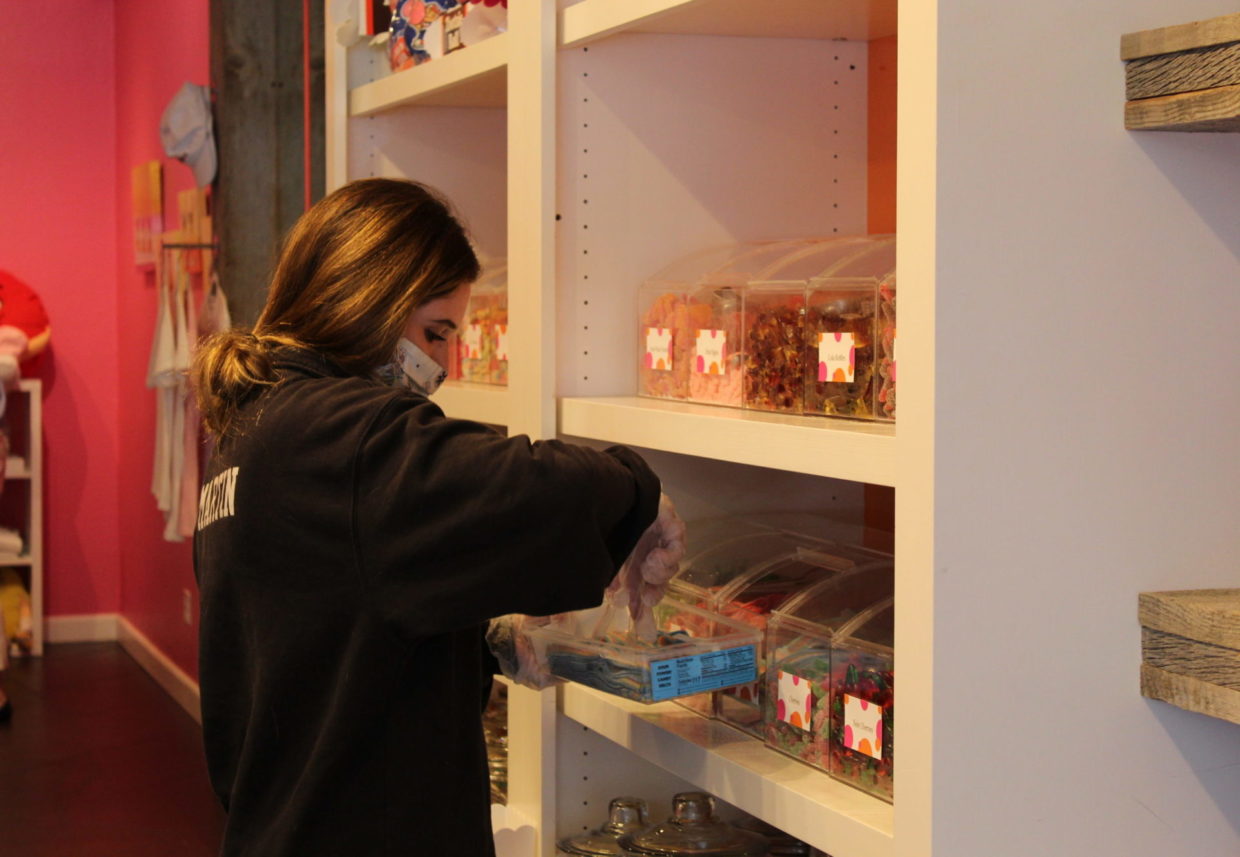 In March of last year, as a result of the spreading coronavirus, California governor Gavin Newsom implemented a stay-at-home order for all California residents. Since then, San Mateo County has moved through the tiers established by the state, and after a regional stay at home order, currently sits in the Purple Tier 1, the most restrictive tier.

Despite the ever-changing status and restrictions on reopening business and restaurants, there are a few M-A students who are working under these unique circumstances. One such student is senior Sofia Colowick, who works at the Sugar Shack candy store in downtown Menlo Park, and said her workplace has had to make many changes as a result of changing restrictions and increasing cases. Colowick said that her day to day tasks usually involved “running the register, helping customers get candy, refilling the candy, and we take in a lot of big orders for gift bags and stuff so we make those too.”

Colowick explained that “a lot of what we do now, especially because of COVID, involves wiping down the bins, the scoopers,  the door handles, counters, all of those things.” She also said her work requires that customers wear masks inside the store and gloves if they want to buy candy, and that the candy in the store is changed periodically.

One worry that Colowick had was “people serving themselves, since most of what we have is in bins, and I was a little concerned but we take a lot of caution with people coming in.” But she added that the safety measures that her workplace has have helped alleviate some of her worries, and that “it definitely makes me feel safer when people comply with the rules, and it makes my job a lot easier.”

Another student, senior Tyler Chan, works at Fleet Feet in downtown Menlo Park and shared that worries about potentially sick customers coming into the store are “always in the back of my mind because I won’t ever know if a customer had it until I have it.” But, similar to Colowick, Chan said that the safety precautions at his workplace have helped to alleviate some of his worries. “I think that part of it is because our boss is really understanding of the situation,” Chan explained, “and he’s trying to do his best to keep the store open and keep everyone as safe as possible.”

In terms of day to day tasks in the store, Chan said “we still do the same things we did prior [to COVID], but the way we do them is a bit different now.” Before restrictions were placed on business like Fleet Feet, Chan said his day to day tasks included working the register, helping customers try on shoes, or organizing things in the back of the store and filling out special orders. Under the current restrictions, Chan said that along with restricting the number of people in the store, “We also scan temperature, make sure everyone has a mask, and we’ve even accommodated for outdoor seating since the store in Santa Cruz is shut down.”

Senior Alex Garcia, another student that works at Fleet Feet, said that he is working now because “I’m going off to college next year, and I want to be prepared financially so I can support myself when I’m on my own.” Due to COVID-19 and the heavier restrictions on business in San Mateo county, Garcia said that has been “kind of had to pick up hours and it’s stressful,” but he added that “my boss has made is super easy on us […] and he tries to make it as safe as possible so we’re as comfortable as possible.”

Prior to the initial COVID-19 lockdown, Garcia said he had only worked for about a month before the store was closed. Garcia said that when he came back to work in June, he was concerned about “people getting too close, because I’m not very comfortable with people I don’t know getting close to me.” However, Garcia explained that the safety precautions his workplace has have made him feel safer because “the store was always jam-packed with people, and now with the limit on the number of people in the store it’s much safer and less chaotic.”

Rachel Benedick, another senior, started working at Mountain Mike’s Pizza over the summer and said that she didn’t experience what work was like prior to COVID-19. She said that she spends most of her time at work taking orders and serving customers. “Before COVID, people were allowed to dine in,” Rachel added that if she had worked before the pandemic and “people were dining in I would be going to tables and talking to people and I would be more of a waitress.”

Benedick said that safety measures put in place at her job included wearing masks, wiping down everything that customers touch, and wearing gloves. Like Colowick and Chan, Benedick said she is a little worried about getting sick because “obviously I’m around a lot more people and I have a higher chance of being exposed to COVID,” but she added that she is not too worried because of all the safety precautions put in place.

Benedick said she has come across customers who will go inside without masks and she said that “if they don’t have a mask we don’t serve them, and so that has definitely been an issue with some people.” She added that “most people apologize and say they forgot to put it on and it’s fine, but there are some people who have gotten upset or say ‘You can’t tell me to wear a mask.’ But for the most part, it’s not an issue.”

Chan also said he has run into customers who refuse to follow some of these guidelines such as scanning their temperature or requiring the use of masks. “I’ve had people who are kind of oblivious and take off their masks which kind of makes us freak out. But usually that happens outdoors, luckily, and it doesn’t ever happen indoors.”

Colowick said that she has also had customers that didn’t want to follow safety requirements but explained that “it is pretty rare, but there have been a few occurrences of that.”

This seemed to be a common sentiment among the four students as Benedick explained, “I don’t really know what else we could do other than closing, which isn’t an option.”

Katherine Welander is a junior and second-year journalist with the Chronicle. She is interested in writing features on relevant campus issues.