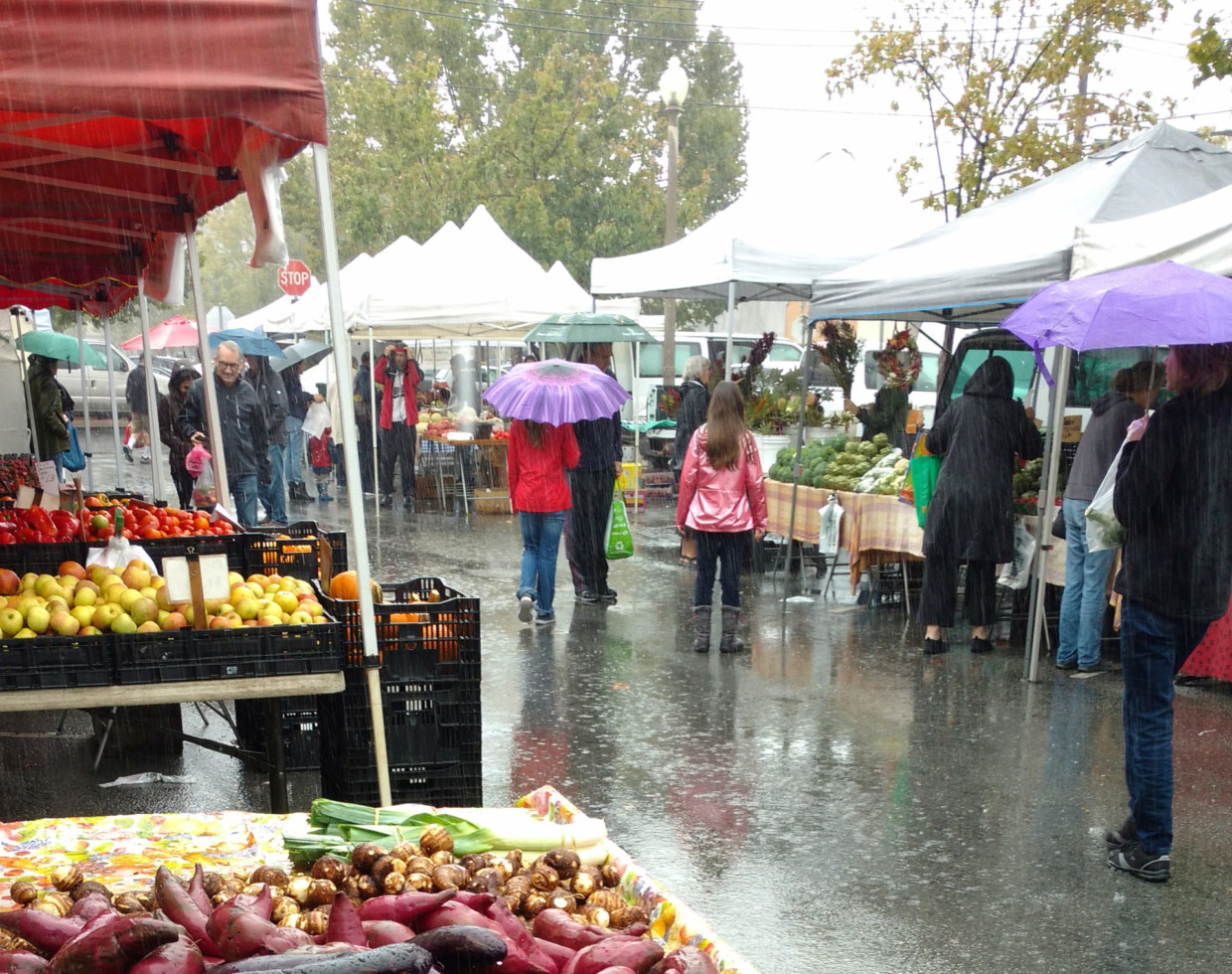 It’s 10 a.m. October rains batter the colorful tents of the Menlo Park Farmers Market. Surprisingly, there are quite a few people who weave between the tents, twirling dripping umbrellas and stuffing their bags with ripe tomatoes, purple radishes, and luscious pumpkins. It’s the perfect opportunity to chat with farmers and friends.

At one of the tents, surrounded by lettuce and fruit, is a smiling M-A student. Senior Mia Paulsen, a competitive diver for M-A, was a frequent visitor long before she became a vendor and even before she learned to dive. “I have been coming to the market every Sunday since I was a baby with my dad. He pushed us in strollers,” she says. This is Paulsen’s third year working as a cashier. It’s a “relaxed environment” as there is often music playing, and her coworkers and clients are friendly. 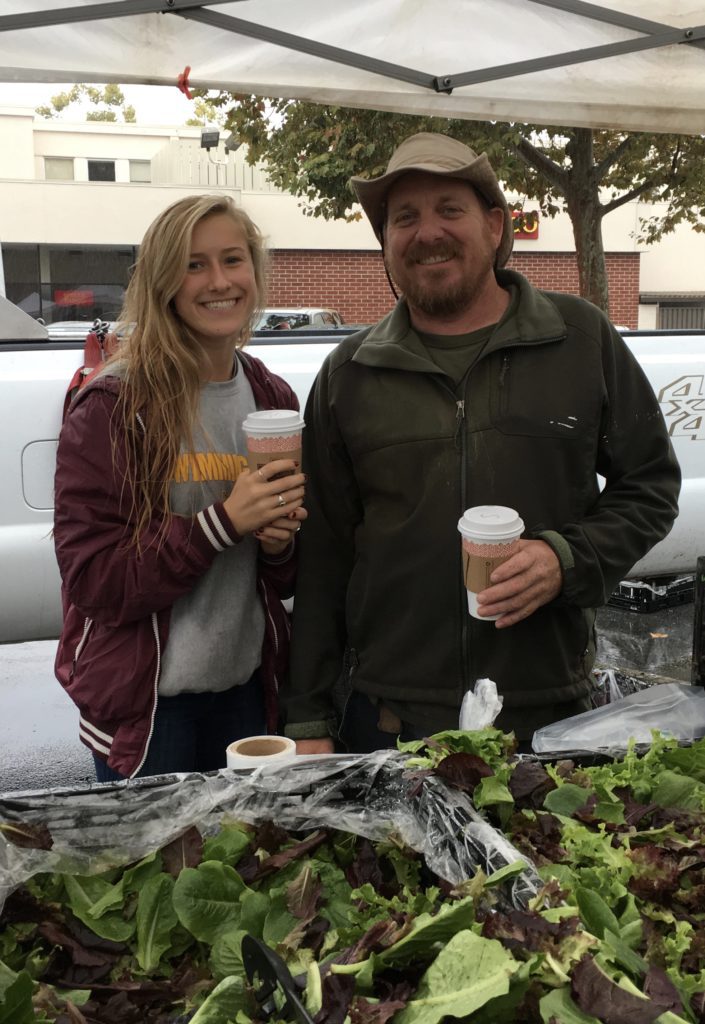 Mia Paulsen stands with her coworker, portraying one of the market’s special qualities, the collaboration of M-A students with the Menlo Park community.

AJ Lemons stands a few stalls to the left of Paulsen selling broccoli. He’s a 2015 graduate of M-A and has been working at the farmers’ market since he was 13. It’s a great way of keeping in touch with his former life. “Everyone from M-A comes, all their parents come, all the teachers come. You see everyone here,” he commented. 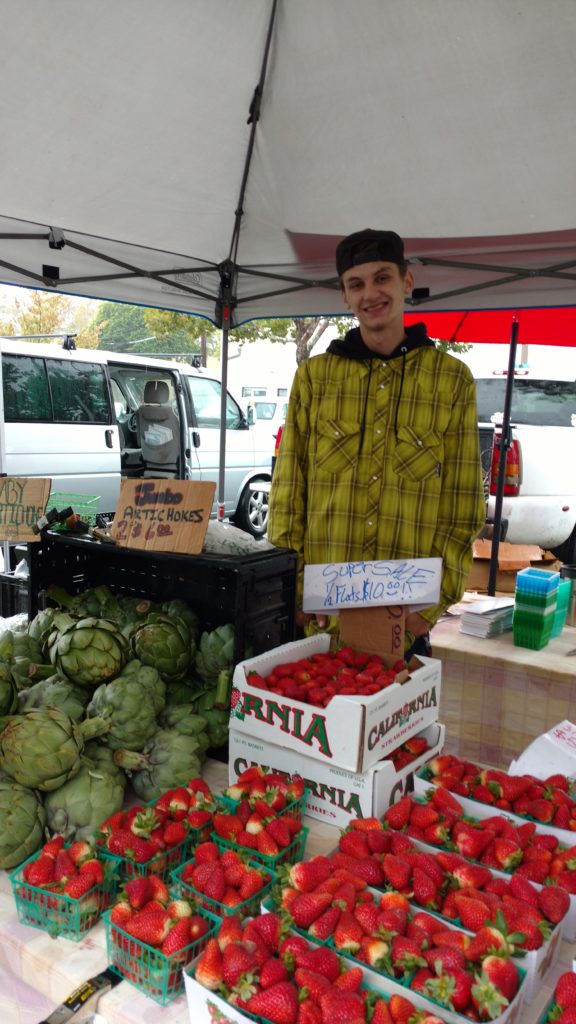 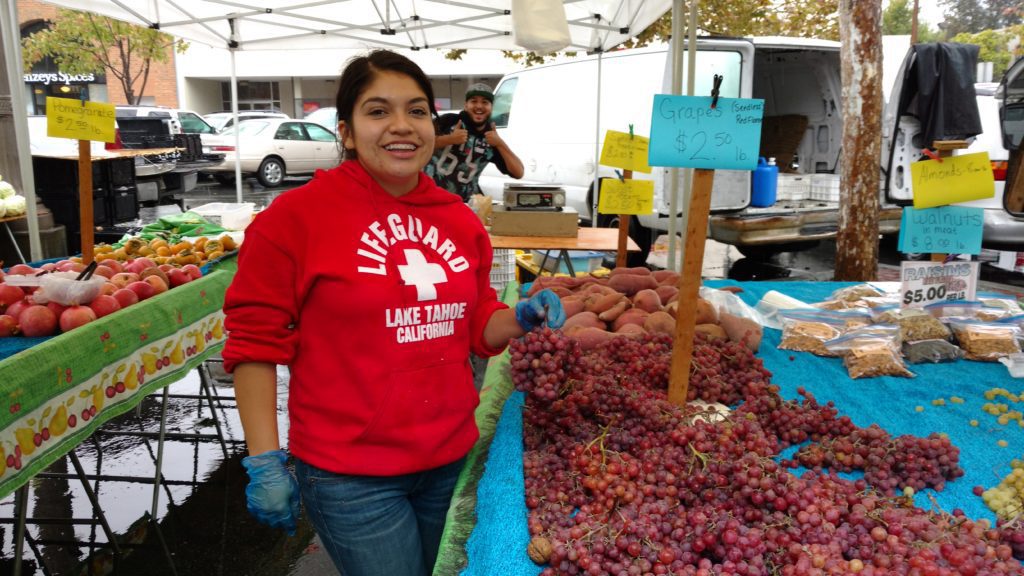 To the left of Paulsen is Lilliana. Like other vendors, she began working for the farmers’ market in her teens. At age 18, she transitioned from picking peaches on a farm to being one of its representatives at the farmers’ market. For the past five years, she wakes up at 4 a.m., drives two hours to the farmers market, helps set up, provides customer service, and records inventory. Incredibly busy, she works seven days a week at the market and at her other job —a nursery growing nuts and grapes. She believes that products from her farm are better quality than those of a supermarket’s because they are pesticide free and have more fresh flavor. “If you go to a grocery store, you are going to get a different nectarine,” she said. Her favorite desserts are pies with fresh walnuts and sweet potatoes baked by her mother. 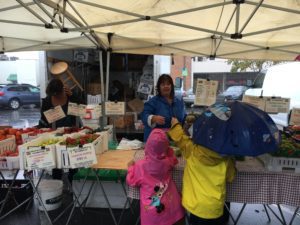 Next to a vendor shaking water off a tent roof, Darlene Mora and Diane Bensberg sell crisp apples and bright green and red peppers. It takes one hour and ten minutes to drive from their farm in Watsonville to the market, so they routinely wake up before the sun blinks. Having worked at various farmers markets for 35 years, Mora believes it is the diversity, such as “different varieties of tomatoes and peppers,” that attracts customers. Mora’s favorite food is her apples baked to perfection with cinnamon, honey, and brown sugar.

In a tent across from Bensberg and Mora is Grace Ferguson, an M-A senior and member of the SEEDS environmental club. Bundled up in a winter coat and boots, she greets eager customers ready to buy lettuce, turnips, and zucchini. When working at the farmers market, she gets up at 6 a.m. and drives to the market to help set up the heavy crates. Just two months into working at the market, she feels productive in “combating climate change” and supporting local farmers. Unlike her former job working at a restaurant in downtown Palo Alto, she feels comfortable and happy with her customers and coworkers. They support each other and “care about doing good. They’re generally nice people to be around.” 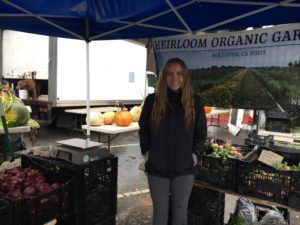 Headed towards the lettuce buffet is John Hale. A father of a former M-A student, he is a coach and photographer for M-A’s cross country team. “I have got to get greens for our iguana and tortoise. I like the salads, but it’s mostly for the reptiles” he said. He recommends the market for all people: “If you really want fresh food, you can’t get better than this.” 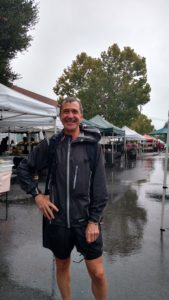 John Hale poses for the camera.