In 2020, M-A discontinued its two most introductory math classes: Algebra Readiness and Algebra Topics. Together, these courses provided a two-year alternative to the standard one-year Algebra I class. While M-A’s broader trend of combining class levels to decrease overall stratification—also known as detracking—seems like a plausible reason for the classes’ removal, in fact a number of other issues led to the removal of the classes from M-A’s course catalog.

Despite good intentions, several issues plagued the Algebra Readiness class, which eventually led to its removal. The first issue was one of equity. Pre-Calculus teacher Khoa Dao said, “Students who had to take Algebra I with Support or the Algebra Readiness class were almost 100% from Ravenswood. They’re not representative of the whole population. Combining the racial and socioeconomic homogeny of the class with it being the lowest-level class, it was just not great to be advertising to other people.”

Secondly, Algebra Readiness did not count towards the math graduation requirement. M-A requires two or more years of a high school-level math course to graduate. Though Algebra Topics was considered a high-school level course, Algebra Readiness was only a middle school-level course, so it only provided elective credit. Dao said, “Students had to go through an entire two-year sequence to get credit for Algebra I.” 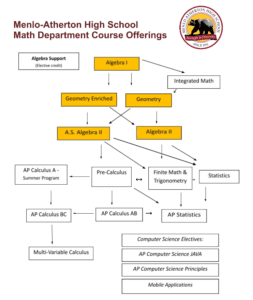 The third issue was with tracking. Algebra Readiness students had virtually no chance of ever moving on to Pre-Calculus or Calculus-level classes. At best, students would take Geometry junior year and Algebra II senior year. Though students could theoretically test into a higher track, Pre-Calculus and former Algebra I Support teacher Arminda King said, “Technically, there was a path, but realistically, there was no way a student could advance to Pre-Calculus.”

The fourth issue was the MDTP. There are several problems with placing students on certain tracks based on a single multiple choice test. One is that students could guess and thus get a score that does not reflect their knowledge. As stated earlier, to place into Algebra I, students had to score at least a 13 out of 45. With five possible answers per question, a student guessing completely randomly would have a 9.9% chance of placing into Algebra I. Another issue is that students could be stuck in the two-year track just by doing worse than their usual on the exam. Ultimately, judging a student’s abilities solely on their performance on one test is inaccurate.

The fifth issue was poor attendance. King said, “I definitely had students in my class who wanted to go to college and showed up every day. But I also had some students who had really internalized, ‘I’m not good at math.’ They were just very quick to give up and surrender. I also had some students who had crazy stuff going on in their lives, and so Algebra Readiness was not their priority.”

Since all of the students in the class were below grade level, many of them felt that they were unable to learn math and, in conjunction with them not receiving math credit for the class, many felt there was no reason to show up.

Algebra Readiness remained despite these issues for several years until the District started to reassess certain classes. Dao explained, “The District hired a consultant to come help us look at our classes and think about some of the equity issues we had within our offerings. What they found was that the way we offered Algebra—specifically the two-year track—at this school was different than at other schools.”

As a result, during the 2019-2020 school year, M-A participated in a District pilot where some students who would normally be Algebra Readiness-bound were placed in Algebra I. Dao explained, “We saw that there were fewer students failing. Not all of those Algebra Readiness-identified students who ended up being in the Algebra I pilot were successful, but they were more successful than they would have been otherwise.”

With the pilot’s success, the District decided to get rid of the Algebra Readiness and Algebra Topics classes entirely. Reflecting on its removal, Dao said, “Yes, I’m glad that they got rid of Algebra Readiness. But I think we need more support for the teachers who are teaching Algebra I.” Without Algebra Readiness, some of its former issues have been passed on to Algebra I. Dao commented, “Algebra I is the hardest class to teach on campus.”

Much of this difficulty comes from the wide range of students now in Algebra, since the students who would have been placed in Algebra Readiness are now in Algebra I. King said, “You are teaching a mixture of students who range from far below where we would expect them to be, to students who are exactly at grade level. It’s a huge range. But you’re trying to support all of them. On top of that, you’re helping ninth graders mature and develop good habits.”

With such a wide range of students, many are still learning English, and so are unable to read the word problems in their class. As a result, former Algebra teacher Ally Jordan would travel to English classes to help students read and interpret large research assignments, as many students would otherwise fail to understand the context behind the projects. However, Jordan has since left the school, leaving this position vacant. Dao stressed the need for someone to do this, stating, “It was a start to have somebody come in to help students with word problems. However, that was one person helping with one section, maybe 20 or 25 students. How many Algebra I students do we have reading below grade level? A lot more than 25, that’s for sure. We need more cross-department collaboration.”

Algebra Readiness leaves behind a mixed legacy. The class certainly prepared some students for Algebra I, but at the same time left students stuck in a lower track. With its removal, these students are now able to move on to Pre-Calculus, but at the cost of making Algebra I harder to teach. King said, “I understand why we had the class and why some people would still support having it. But for me, I don’t. I think we should find other ways to support those students, but not through Algebra Readiness.”

Adrian Deutscher-Bishop is a senior at M-A this year. He enjoys writing about everyday occurrences at M-A as well as satire. In his free time, Adrian acts, stargazes, and makes graphs.