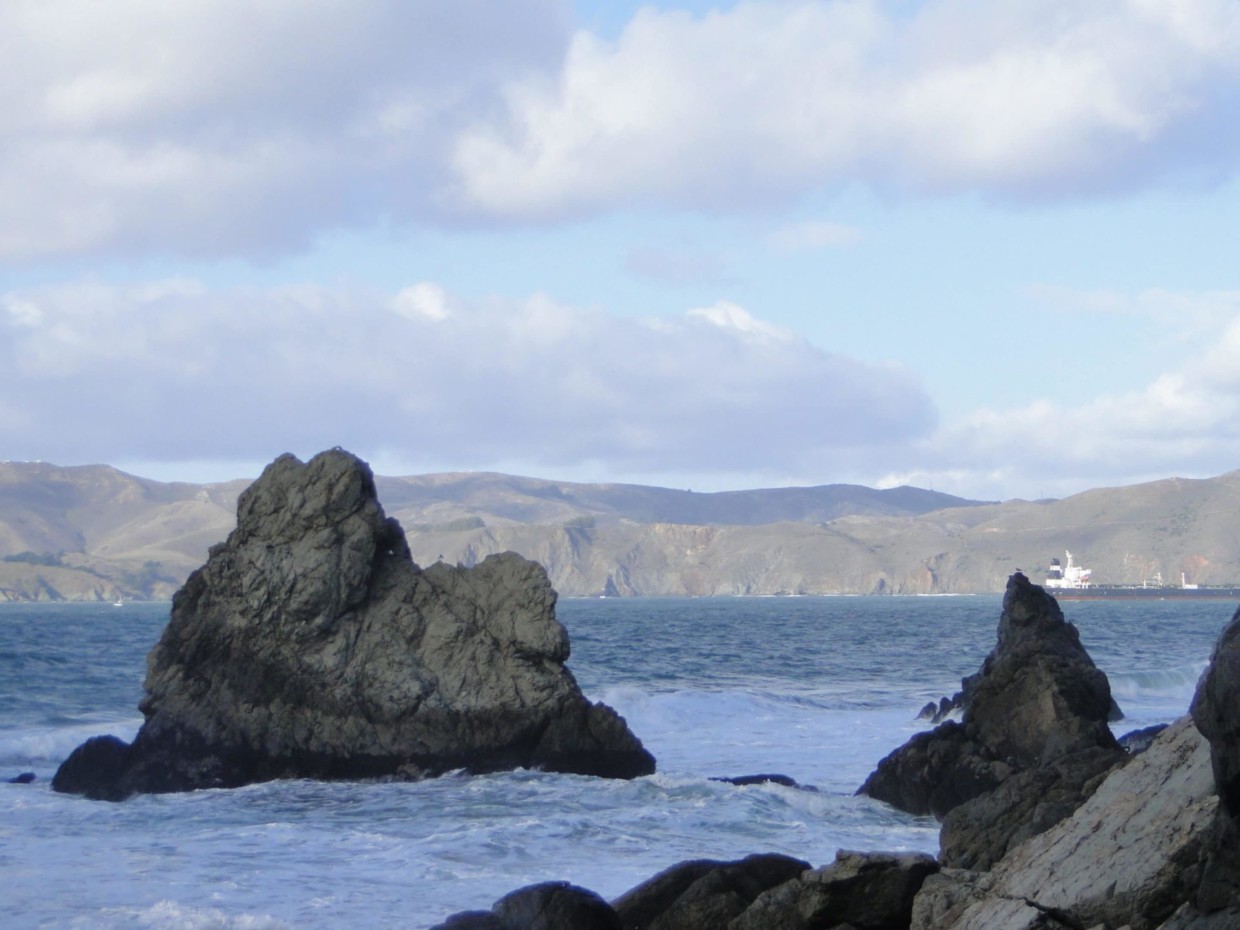 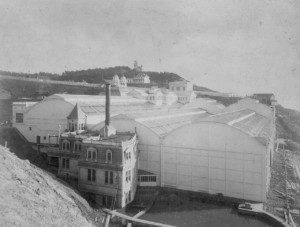 On the northwesternmost tip of San Francisco, what appears to be some sort of ancient relic sits upon the Pacific. Perched upon a plateau among steep bluffs, there is a distinct air of peculiarity surrounding it. Primarily concrete, worn by the stinging ocean air, there are but a few stone walls remaining around this nearly three acre property. Eliciting, with its overgrown grasses and exposed rebar, more feelings of disuse and abandonment than anything else, it is odd to see masses of people walking around this seemingly insignificant site. It is hard to believe that, once, it was a staple of San Francisco culture.

First opened in 1894, the Sutro Baths were an immediate citywide hit. The founder, and its namesake, Adolph Sutro, who made his money in mining, was serving his time as mayor of San Francisco during its construction. A former lower-middle class German immigrant, Sutro made it his priority with the baths to bring inexpensive leisure to the masses, a novel idea at the time. 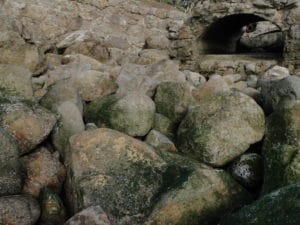 Remains of a saltwater valve at the Baths today.

The facility was groundbreaking for the day: 1.7 million gallons of seawater flowed directly into the baths during high tide, and during low tide, it was pumped in via an extensive pipe system. Inside were restaurants, concert facilities, and even a natural history museum that at one point housed a mummy. This 10,000 person facility was, needless to say, a behemoth on the San Francisco recreation scene. The thirty or so years following its opening was a golden age for the facility. 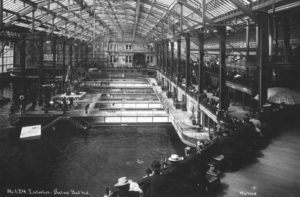 Throngs of people flocked to the Cliff House and the Sutro Baths, both owned by Sutro, via Sutro’s own railroad line (the Land’s End area of San Francisco was still relatively inaccessible by public road at the time). While never particularly profitable, the steady stream of people rarely, if ever, faltered. But, as with all great things, this era had to come to an end.

By the Great Depression, the facility’s luck began to take a turn for the worse. With disposable income becoming a thing of the past, leisure facilities like the Sutro Baths lost most of their customer base. Even after the end of the Great Depression, with new, stricter health codes, the baths lost much of their appeal to younger audiences. In this way the baths spiraled into insignificance until a fire that destroyed it in 1957. 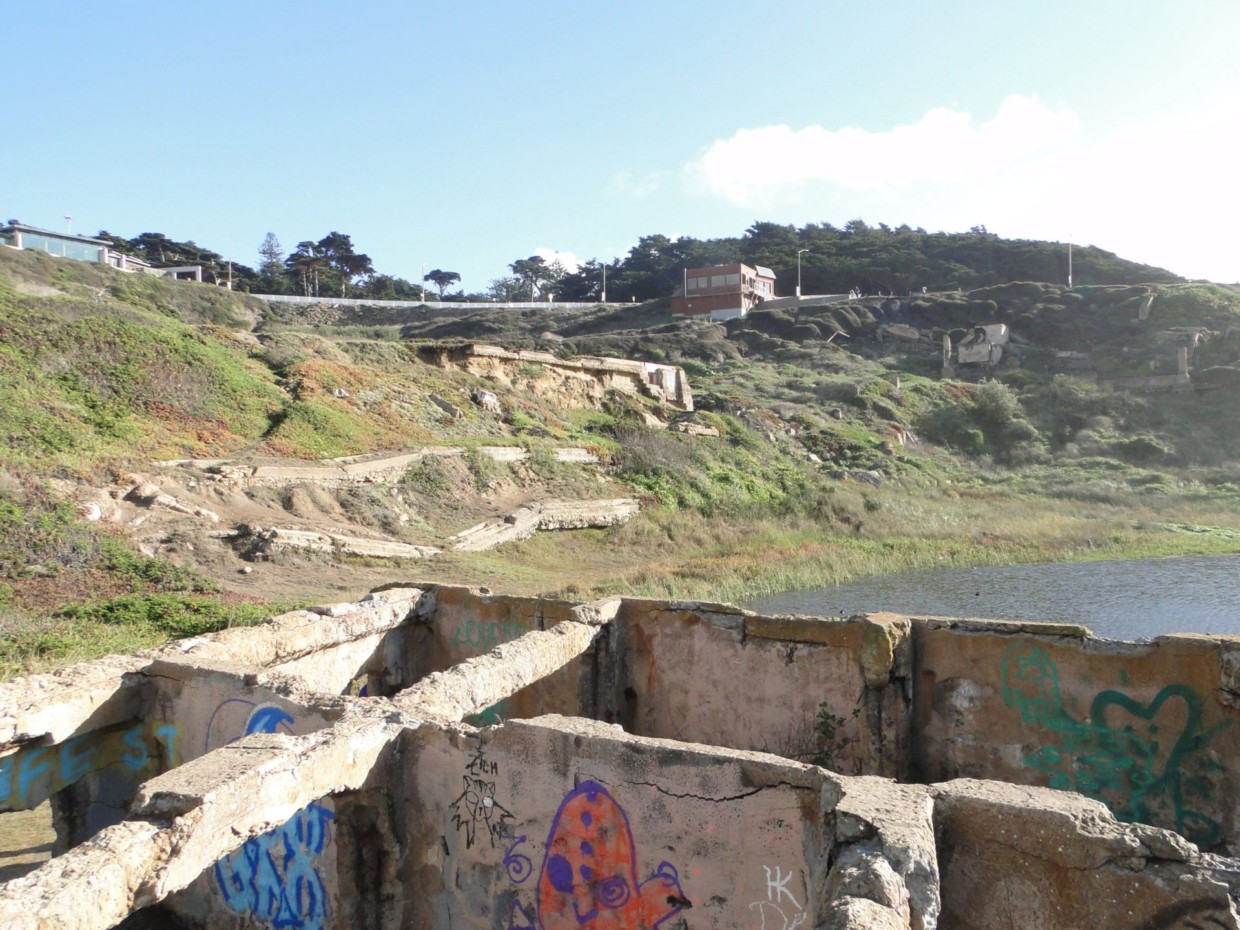 Remains of the base of the recreation area are covered in graffiti.

It is hard to believe that this ruin was once such an integral part of San Francisco culture. A world-class facility, reverted to concrete and rebar. As with many decrepit structures of this sort, one can’t help but reflect upon the inevitability of the progress of time; irrevocable in its advancement.

But, out of its death, a new life has been formed– graffiti covers the remaining walls, giving the dull gray concrete new life. On top of that, there is something deeply satisfying about exploring abandoned structures, and the baths are certainly no exception. While there isn’t much in the way of enclosed buildings, there are several open concrete spaces worth poking around in. Additionally, near the water, the original saltwater pump system is still visible, and is worth taking a look at. 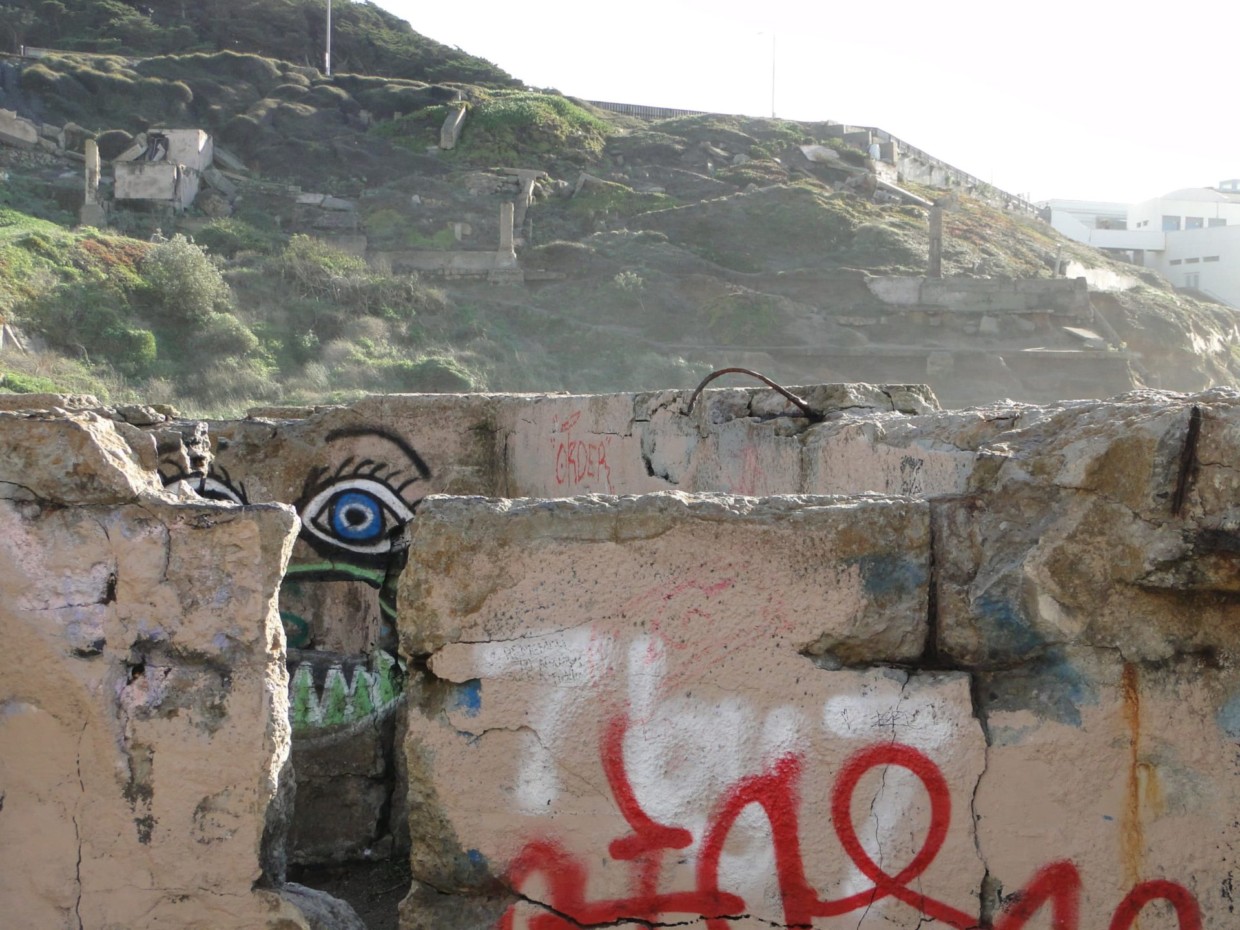 But Land’s End has more to offer than the baths. However hard it may seem to top the remains of a pool/museum/restaurant/amusement park, the hike following it manages. A quick mile-and-change out to the Land’s End Labyrinth, the maybe thirty minute walk is entirely worth the effort. It is so rare to find proper nature in the San Francisco– Golden Gate Park, while undeniably pretty, still feels more like a well-manicured lawn than a reflection of the natural grandeur of the area– and when it is so well preserved, it is goosebump-worthy. 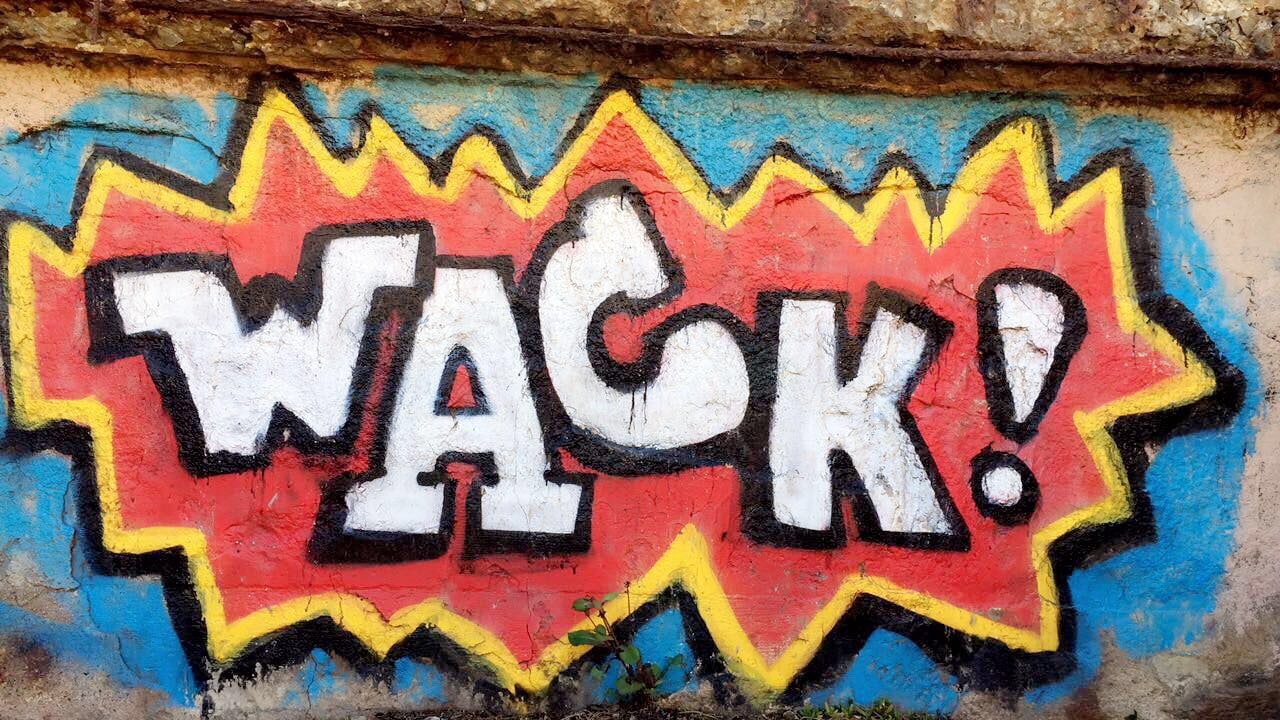 Graffiti underneath the former pool deck. 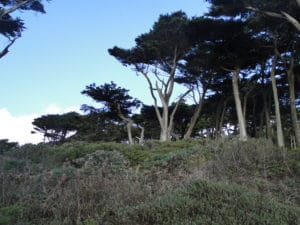 The gargantuan Monterey Cypresses that coat the entirety of the northern tip of the park are particularly striking, with their bare trunks and high-reaching foliage. This, paired with the dark green shrubbery of blackberry bushes and miner’s lettuce, helps add to the illusion that one is not in San Francisco. It feels foreign, but not unfamiliar; somewhere free of the city, and everything that comes with it. 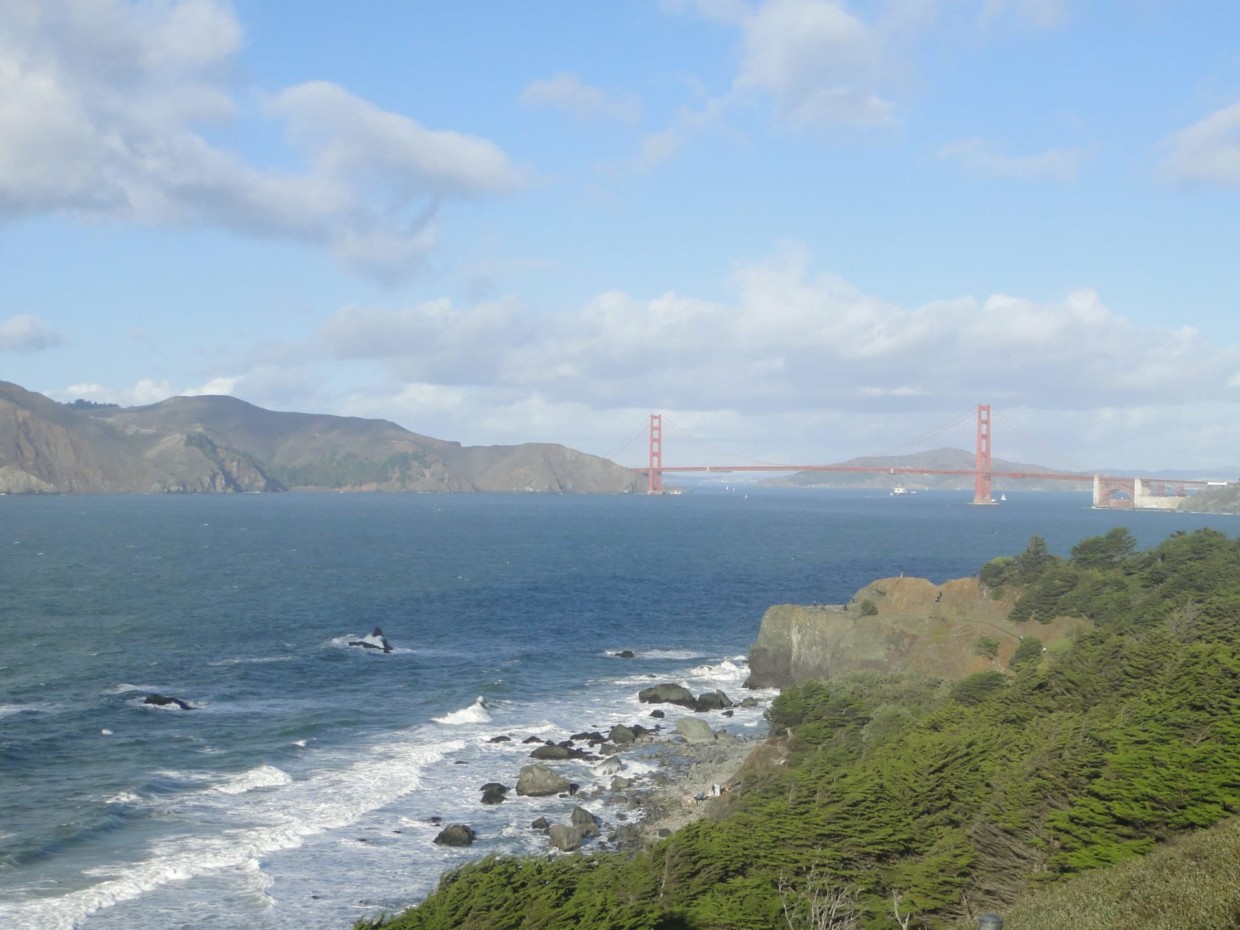 Unfortunately, or rather fortunately, this illusion is quickly shattered by the stunning view of the Golden Gate Bridge, framed against the East Bay and Marin. On a picturesque day, it is by far the best walk to be on in the city. 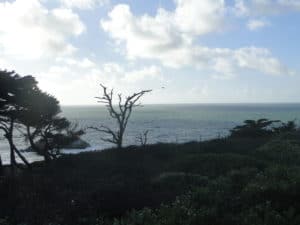 Additionally, on the way back, it is not much of an extension to stop by the Legion of Honor, which is certainly worth a visit. Currently, they’re showing Islamic art and manuscripts, from a period comparable to that of medieval art in Europe, or around the turn of the millenia.

This rather small exhibit will be around until January of next year. But, the museum’s primary exhibit right now is that of the jewels and other precious objects of the maharajas of the Mughal empire. This is genuinely worth seeing, as it is not often that one can say that the have seen several one-hundred-thousand dollar bowls in an afternoon. Beyond that though, the jewelry is very beautiful, and alone merits a visit to the Legion. That exhibit is open until February of next year. Of course, if neither of those strike your fancy, their permanent exhibition never fails to please.

In total, the outing took just over three hours, much of which was spent in the Legion of Honor. Not a day’s worth of activities, but perhaps an afternoon, when paired with lunch or dinner. Regardless of how or when, though, you should visit the Sutro Baths at some point.