If you are willing to spend an hour and a half of your valuable weekend driving, Castle Rock state park offers striking vistas of the surrounding Santa Cruz mountains, and hikes for beginners to experts.

Castle Rock, home to rock faces Goat Rock, Indian Rock, and its namesake, Castle Rock, is unique, in that it is one of the few parks on the peninsula that allows rope climbing and bouldering. The park, once part of a submarine fan, or underwater accumulation of sediment along a continental shelf, is consequently constructed mostly of sandstone. Sandstone lends itself to climbing, and has helped the park become a popular destination among amateur cragsmen and women in the Bay Area 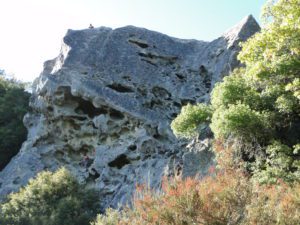 Goat Rock is one of the crowning attractions of the park.

Goat Rock, the most popular of these faces, hosts a steady stream of climbers, regardless of the day of the week, or the time of day. Its pockmarked face, notched and pitted from millions of years of erosion, is unparalleled in its irregularity– its hollowness is distinctly foreign, a pleasure to look at. Watching the climbers work their way up the face, is certainly worth stopping for fifteen minutes.

For the less vertically inclined like myself, Castle Rock has a central loop, from which several different paths can be taken. The shortest, at just over one mile round trip, out to the Castle Rock Falls Overlook is scenic, but is far from the best view offered by the park. The other extreme, the Skyline to the Sea Trailhead, a minimum 25-miler that winds from Castle Rock state park to Waddell Beach, is a good option for more experienced hikers, as it generally takes at least two days of through-hiking. 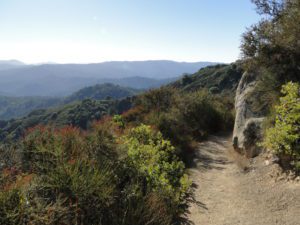 Leg two of the trail.

Fortunately, Castle Rock doesn’t only have hikes at both extremes. The Castle Rock Campsite hike, for example, is a very reasonable five miles, and passes Goat Rock and Varian Peak, one of the local peaks on the preserve. A similar hike, the Saratoga Gap loop, is a slightly more challenging six miles, going slightly beyond the Campsite loop.

This isn’t just a walk in the woods, though. The first half hour may lead the unsuspecting hiker to believe as such, with dense tree cover and substantial shrubbery; it is remarkably dark, even in the middle of the day. But, what follows could not be more different. 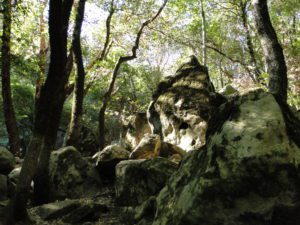 The first portion of the trail is dark and covered.

After passing Castle Rock Falls Overlook, the trail emerges out of the trees, meandering along the side of one of the many hills that make up the Santa Cruz mountains. Objectively the best part of the hike, this leg puts on display the best this range has to offer. Pronounced ridging, complimented by deep seated valleys– the sweeping views make for a great accompaniment to a minimally demanding hike. Several look out points in this particular stretch of trail make for a good place to sit down and take in the surrounding hills, in all of their grandeur. 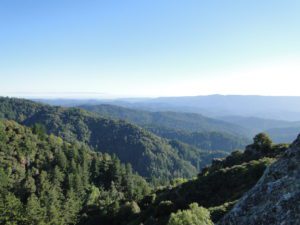 There are several spots to admire the Santa Cruz mountains.

Eventually, the trail reaches an intersection, from which one can go further, out to the main campsite (or for the really ambitious, out to Waddell Beach, another quick 26 miles ahead), or turn back to the main parking lot. Regardless, all trails but Skyline Trail, which comes back on the other side of Skyline Boulevard, circle back past the top of Goat Rock.

In terms of wildlife, the park has more than enough representation, with a substantial bird, deer, fox, snake, and lizard population. While I did see several deer during the brief walk through the woods, the more exposed second part of the trail is definitively lizard country. The most widely visible lizard, by far, is the Coast Range Fence Lizard. Native to the region as the name suggests, the Coast Range Fence Lizard is a subset of the species Western Fence Lizard. 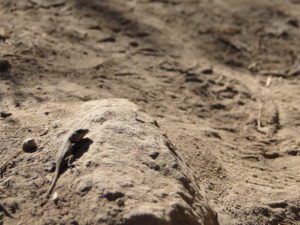 The Coast Range Fence Lizard can be found along the trail.

These, along with an abundance of non-poisonous snakes, make up the majority of the ground-dwellers in the park.

The park is open from 6 a.m. until sundown, and doesn’t allow dogs or bikes on their trails. Also, an important thing to remember: the Los Altos Rod & Gun Club Range is adjacent to the park, so be aware that the occasional gunshot can be heard, and it is just coming from the gun range.

So, is an hour and a half too large of an investment of time for a hike? Maybe. But, are the views worth seeing? Definitely.