On Friday, September 24th, M-A’s leadership hosted a celebration of Latin American Heritage Month by selling tacos and horchata in the G-wing during lunch, but the posters advertising the event were soon covered in written criticisms of the event. 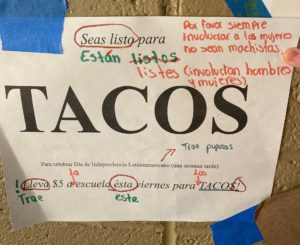 A sign in Spanish advertising the event. Photo by Isabelle Stid 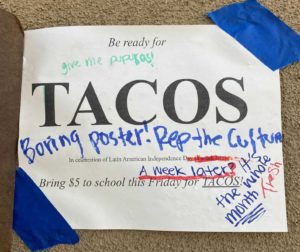 A sign in English advertising the event. Photo by Isabelle Stid

Spanish teacher Salvadora Calonje, who saw problems with the signs and the event as a whole, had sent out her students to write on them and, as she said, “fix them.” Calonje said her initial intention was to “analyze the posters and see what’s going on,” but she said, “Somebody suggested, ‘let’s go fix it.’ I was like, let’s go fix it. Let’s go fix it. Why not?”

The central part of the poster’s design was the word “TACOS” written in all caps in the center of the page. Information about the event was written in a smaller font above and below “TACOS,” and posters were in English, Spanish, and French. Calonje said, “The ones that were in Spanish are the ones that really got my attention because the grammar is completely wrong; there’s nothing that’s correct. Everything is way off. It’s the wrong term. The wrong verb. It’s the wrong word.” Specifically, Calonje said her class focused on the words “seas listos.” She explained that the phrase, while grammatically incorrect, also means “to be intelligent,” when it was supposed to say “are you ready” or “están listos.”

Calonje explained that the poster alterations started because “we’ve been talking about protests and student protests in Latin America, and what does that look like, and why is it important.” She also said, “We’ve been talking about what we can do to raise more awareness, and to be more proactive, and how to be leaders in our school, being Latin American.” Part of this was because of the lack of recognition for Latin American Heritage Month, which started on September 15th and lasts for a month. Calonje explained, “And it turns out that on the 15th, when there were announcements, not one announcement was made stating that it was the beginning of this heritage month. This whole time still there has been zero mention of the fact that it is Latin America Heritage month.”

Calonje said that one of the biggest problems with the event was that “it says on the poster, ‘Latin America,’ but really there’s so much more to our cultures than tacos. There are so many other countries that eat so many other delicious foods. I’m sorry to say this, but I think it’s ignorant to suggest that the tacos will be representative of a whole continent.”

In an announcement on M-A Today a week after the event, leadership teacher Michael Amoroso said, “After open discussions with students and staff, we realized we fell short of our goal, and we agree that we could have been more collaborative and done a better job. We want everyone to feel appreciated.” He ended his statement saying, “Again we are sorry for any wrongdoing anyone feels we have caused, that was not our intention.”

To make matters worse, a poster at the event advertised horchata, a traditional Mexican drink made with rice, cinnamon, and milk, as “Whorechata.” A photo of the poster was shared on the junior class Snapchat.

In the speech given to Losekoot and Amoroso, senior Mario López said, “If leadership wanted to celebrate September 15th, they could have hired dancers, live bands, food trucks that represent different countries and cultures. Instead, leadership decided to do something profitable that in reality only benefits themselves, they used our culture in the process and profited from it, and us Latinx students at M-A will probably never benefit from those funds.”

Senior Alejandra Lombera, who wrote the speech with López and senior Jennifer Chávez, said, “We propose that all of the profit that leadership made from the taco sale be used to make a proper celebration for Latin American Heritage Month. Whether it’s food trucks with more variety of food, or hiring groups that play music, we just want to be represented right. We are being a voice for not only this classroom, but the Latinx community. We take accountability for not getting more involved with Latin American Independence Day, but we will not sit here and stay quiet after how they represented our culture and our people.

In fact, after the backlash from last week’s event, Amoroso said that “in the next two weeks, leadership is coming together with LUMA, Spanish teachers, Ethnics Studies classes, and all of their students to plan a broader more inclusive event during lunch October 14th, on the Green. Mark your calendars, we look forward to seeing you there.”

Calonje believes this event speaks to the larger issue of inclusivity in both the Latin American community and in the M-A community as a whole. She said, “As teachers, we’ve been talking about how we can make our classrooms more inclusive. How can we get our Latin American students connected with their education, and for them to feel like going to college is a good path. But they’re not feeling represented. We are not represented. This event was just la gota que derramó el vaso, ‘the tipping point.’” But despite her efforts, Calonje said, “Estoy aislada, ‘I’m isolated;’ I’m just in my little bubble, my little world here in my classroom, and outside of my walls, there is little inclusion. There’s nothing that connects my students.”

However, Calonje said that encouraging representation is up to her Latin American students, and herself, just as much as it is up to people outside of the community. “I did tell my students, don’t just complain, because this is just us complaining. Let’s put our words into action because where are the Latin Americans in the leadership class? How many of you are enrolled in it? How many of you are really, really working hard to be in those upper-level classes where you can really voice your opinion?” She added, “I also told them that I’m at fault too, that as a teacher—as a Latina teacher—I take the blame too, because I should have remembered. I should have put it out there. I should have sent an email somewhere. I’m mad at myself too for not sticking up for you guys.”

Reporting from past editions of the Mark shows that Latin American students are often vastly underrepresented in extracurriculars and varsity sports, as well as in yearbook, M-A Today, and M-A Chronicle reporting. Additionally, reporting from 2016 shows that less than half of Latinx students take at least one AP or IB course before graduating.

In the future, Calonje said she hopes to see more communication. “We are a majority at M-A, but there’s little that’s connecting us to M-A. So who’s that bridge? I don’t know. Who’s making those connections? I don’t know. I’m trying in my class, but I only have a certain number of students. I know that in our department, the teachers work hard in sharing that culture, but it’s limited.”

Calonje said lastly that “if it was just like, ‘oh, let’s do this because we have to do it,’ why didn’t you wait? Why didn’t you wait until the last day, and have a big celebration? Email the teachers, email LUMA, email Intercambio, the Latin American History class. I’m sure, if we had gotten together and talked about it, I’m sure we would have had this great party.”