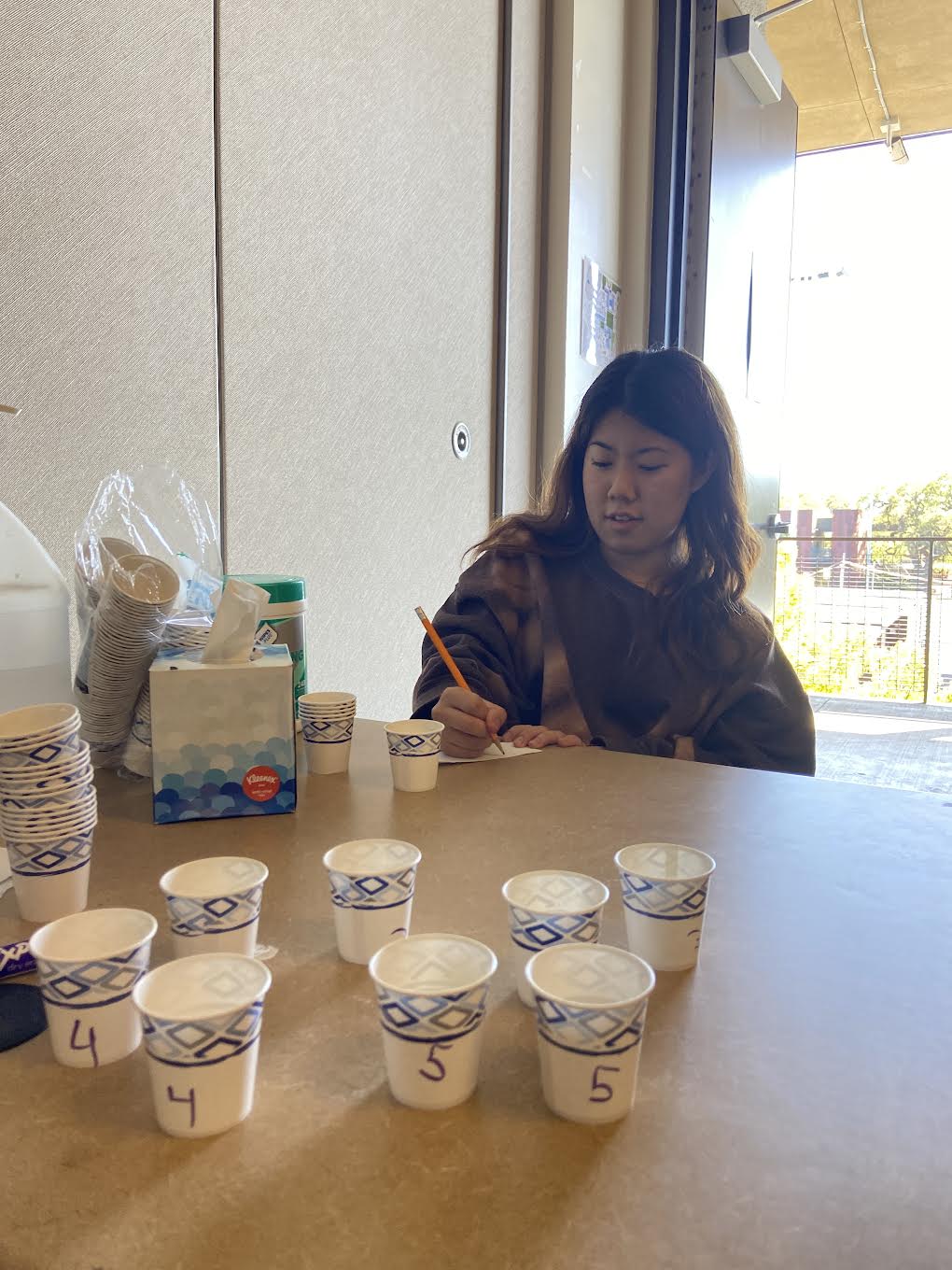 Water You Waiting For? Try These Fountains on Campus!

It was a hot, barren spring day and two parched M-A journalists needed a soothing drink of water. After a treacherous journey by foot, they finally reached the water fountain. Upon the first taste, they were intrigued by the unique flavor and crispness of the water, and at that moment, their water-tasting journey had begun.

For our investigation, we asked ten M-A students to do a blind taste test of water from five different campus water fountains. Then, they described the flavor and experience of each water sample on a comment card and ranked the samples. Shown below is the first round of our experiment with all cup samples labeled.

Shown below is the first round of our experiment with all cup samples labeled and the map of the school and which water fountains we tested: 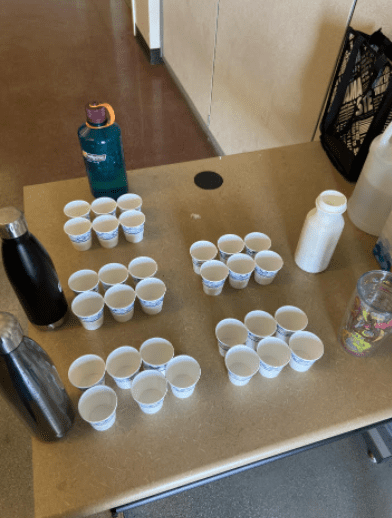 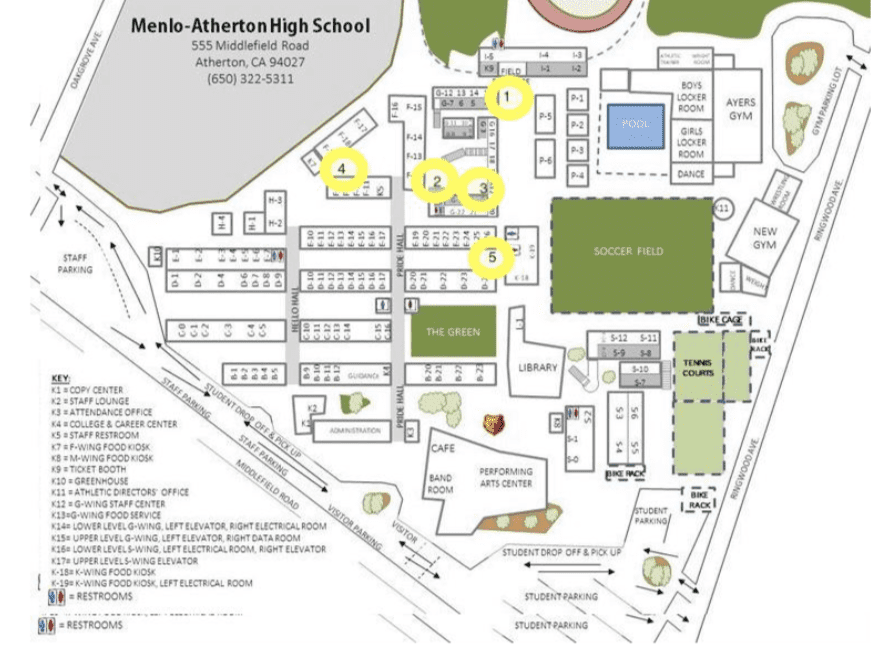 We began by rating the water fountains based on location and atmosphere. #1, between the G-wing tables and I-wing, won our top pick for ambiance due to its proximity to the Coach Park’s Field as well as the swimming pool. Unlike some spots on campus where we’ve seen wads of gum stuck to the buttons, this spot had only a bit of schmutz in the fountain. Due to its location, it is great for student athletes seeking hydration. 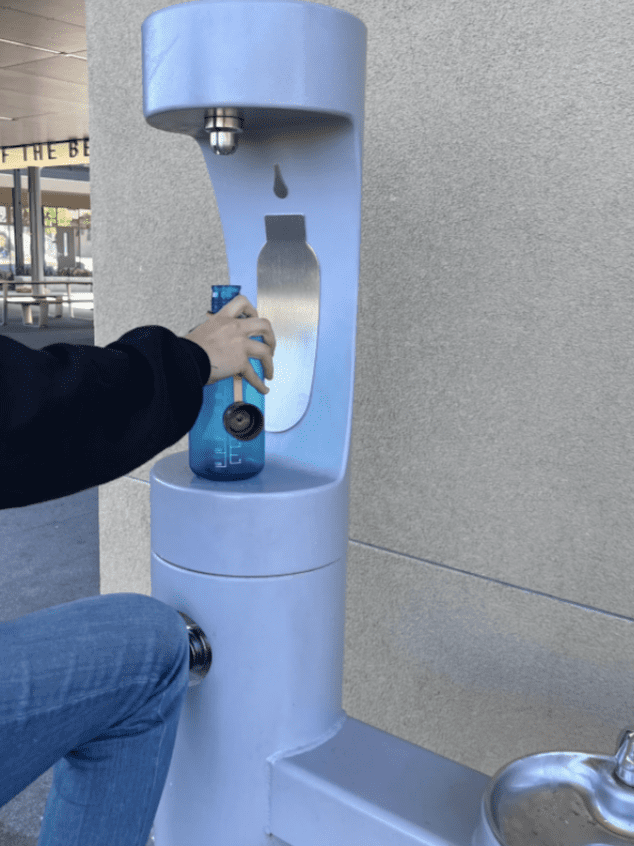 #3, next to the G-wing lunch lines, was easily the grossest fountain, coming in last place for ambiance. With grimy dirt plastered to the drain of the fountain and a broken water bottle filler, we were very disappointed with our experience. 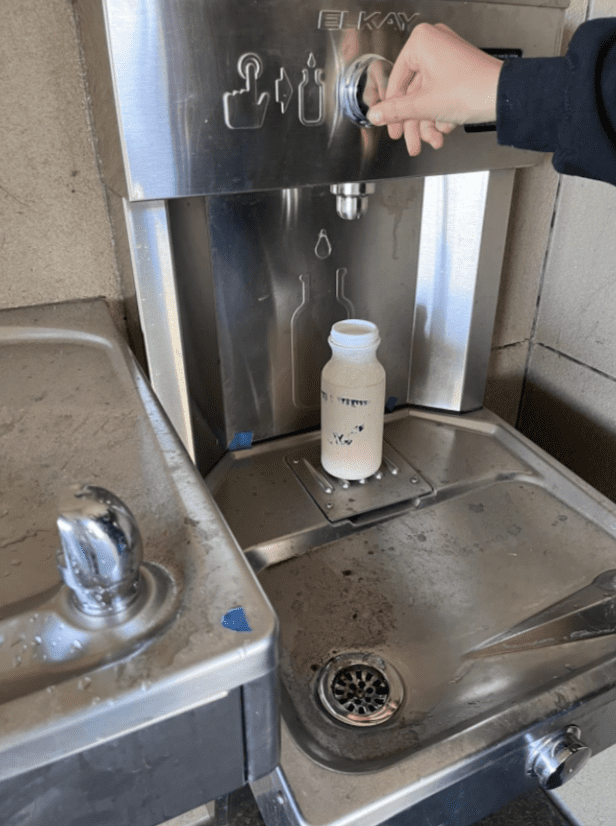 However, we were pleasantly surprised to taste the next G-Wing water fountain, which was spotless, but did not have a working water bottle filler. 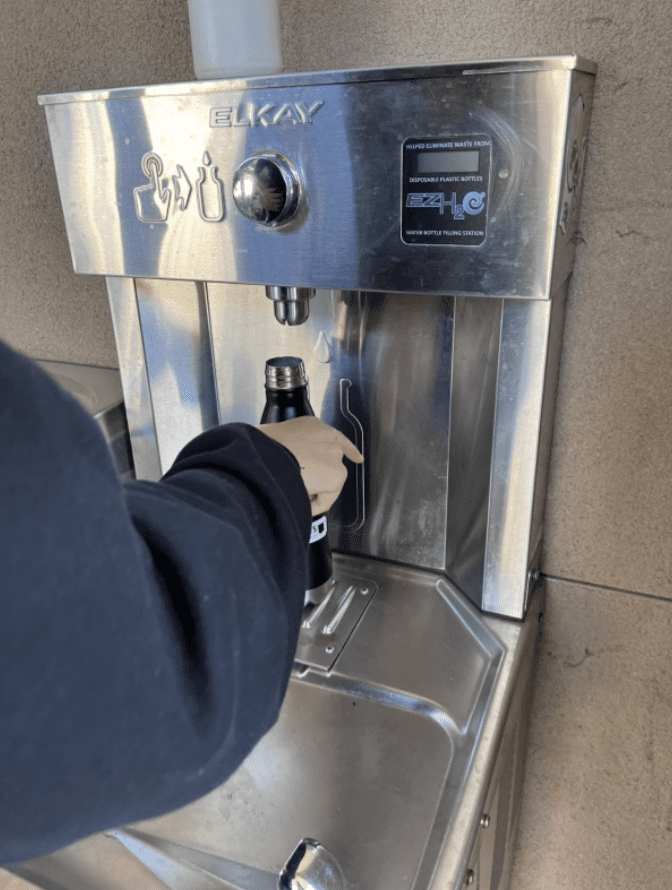 The F-Wing water fountain was also impressively clean and had both a working water filter and a quiet space. Next, we traveled to the mirrored K-wing bathroom to test fountain #4. This was one of the fountains that had a working water bottle filler, which is a win in our book. But, while the water bottle filler worked, it was too sunny to see anything and we fear that in the hotter future, the fountains will be scalding to the touch! 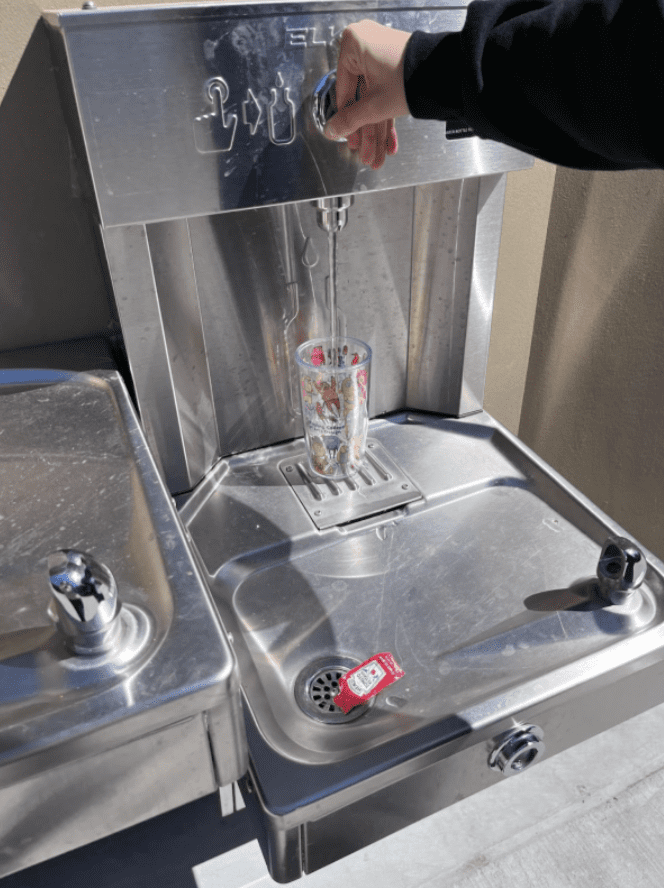 As “scientific” journalists, we found some fascinating results through our investigations. The taste of the water seemed to correlate with the appearance, ambiance, and cleanliness of the fountain, even though the experiment was blind and most testers had no idea where we even got the water from. Some even jokingly asked about one sample, “Did you get this from the pool?”

The sparkling cleanliness of sample #2 water gave the best results, and it is subsequently not surprising that 6/10 of our esteemed testers chose this water as the best tasting. One tester said the water was “cool, with a balance of sweet and crisp” while another said they liked the “smooth mouth feel.” Although it got first place, it may surprise some that the taste was also called “chlorinated” and “rubbery” by a few judges.

The most disgusting water fountain, #3, was also considered the worst quality water by the majority of the judges, 6/10 again. “Temperature bad, flavor bad” and “horrible,” said two judges. Another simply said it tasted like “dog s***.” A particular judge stated that it tasted “like cardboard, but not really in a bad way.”

The official water fountain tasting experiment has come to a close, but that doesn’t mean the water drinking should. Remember to stay hydrated as the weather gets warmer! 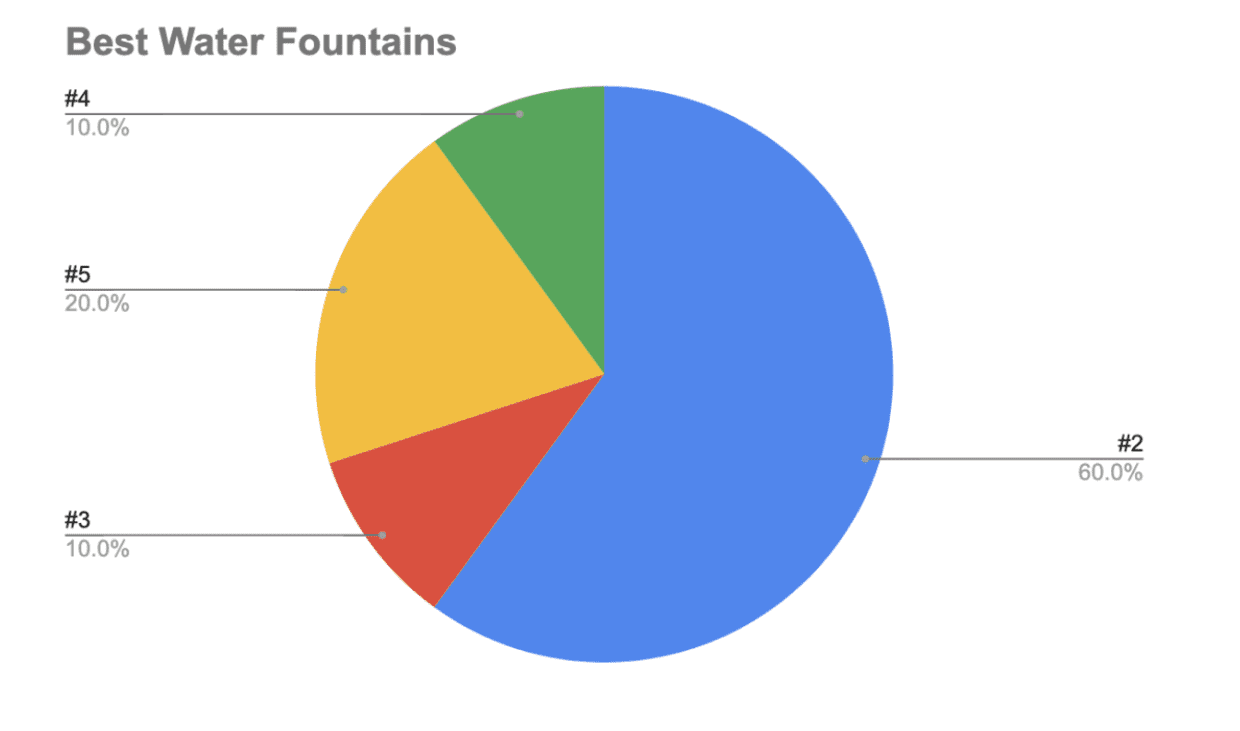 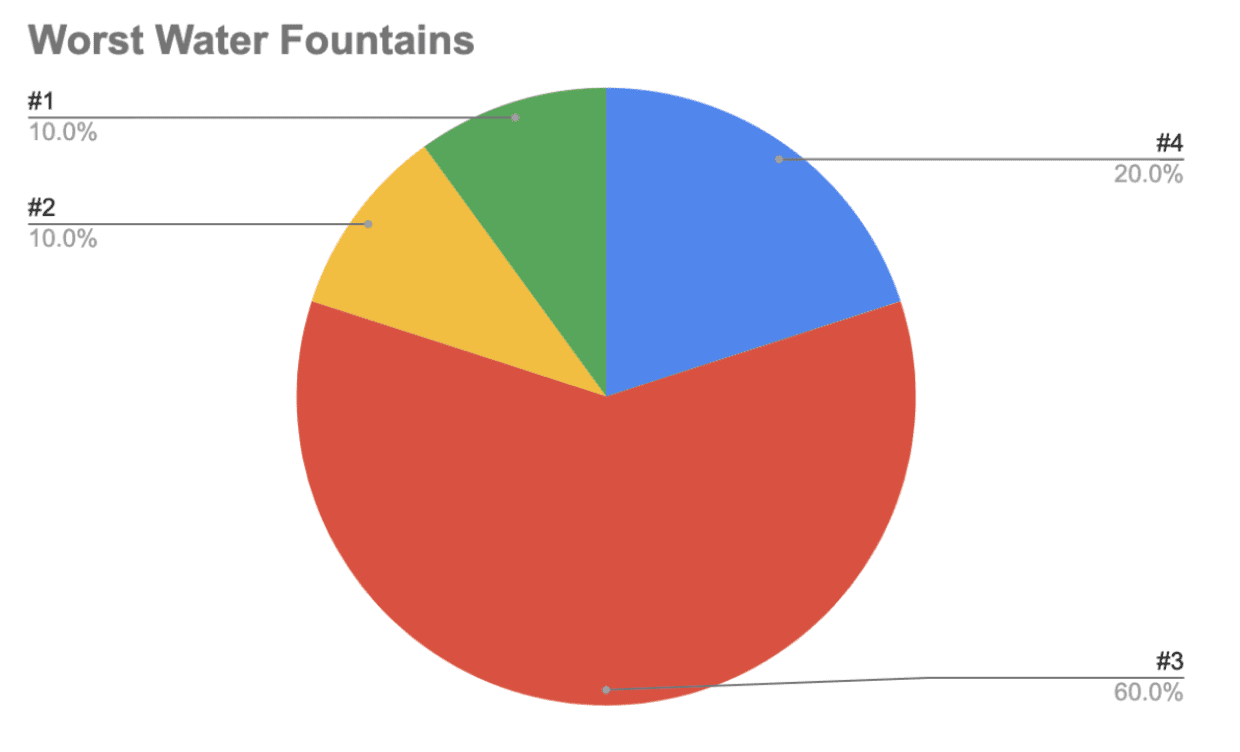