Varsity Volleyball Advances in State Playoffs with Win Against Skyline

The girls varsity volleyball team continued its postseason with a decisive win over Skyline on Wednesday, November 16. This win came after a disappointing loss versus Notre Dame High School, Belmont in the opening round of Central Coast Section (CCS) playoffs. The Bears proved that they are far from done playing, as they crushed their competition on Wednesday in three sets.

Assistant coach Lauryn Anderson explained, “We are working hard in practice to maintain our style and level of play no matter what each team throws our way, and focusing on the things that we can control.”

M-A came into Division One NorCal playoffs seeded first, and starting in the first set the Bears proved that they deserve this rank. The lineup in set one was similar to the Bears’ previous matches, with sophomore Erica Fischer as libero and senior setters Casey Olsen and Kirby Knapp setting in a 6-2 rotation. 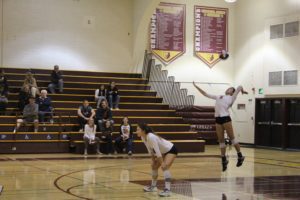 M-A got off to an early lead, and Skyline missed two consecutive hits to bring the score to 5-1 in favor of the Bears. Senior right side Eliza Grover got a powerful kill off a slide set and an ace from sophomore Alicia Letvin brought the score to 7-1. 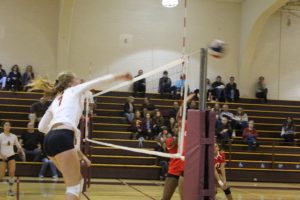 Grover attacks from the right side.

The Bears continued to dominate both offensively and defensively, helped by great serve receive by Fischer and aggressive hits. Letvin ended the set with a kill off a perfect ‘back one’ set by Knapp, final score 25-6. 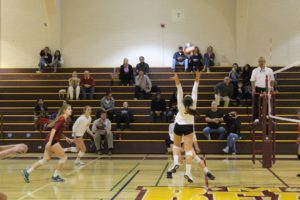 Knapp completes a nice back set.

In set two, head coach Fletcher Anderson kept the same competitive lineup, and Knapp kicked off the set with a great serve that was not returned. Skyline made three errors in a row to bring the score to 4-0, followed by an ace from Knapp to make the score 5-0. At a score of 6-1, junior Lauren Heller subbed in as an outside hitter. Senior outside hitter Jacqueline DiSanto subsequently served two consecutive aces.

DiSanto continued serving until the score was 12-1, and added a point with a kill out of middle back. When the Bears led 18-3, sophomore Kathryn Jones, who was pulled up to varsity for the postseason, subbed in to play right side. In her varsity debut, she helped her team to a solid 25-4 victory.

Anderson switched up the lineup slightly for the third and final set, and junior Nicole Kang started in the opposite position. Skyline missed a serve to start the set, and the Bears pulled ahead early with a great serve by DiSanto and another kill by Letvin on a back one.

Awesome playing and a kill for the Bears! they lead 11-1 set 2??? pic.twitter.com/fSVszwjQ2e

DiSanto again served up an untouched ace to bring the score to 7-0, and Grover hit a kill from the right side. After this, DiSanto earned another ace, and when the score was 11-0 Skyline called a timeout.

Despite the timeout, M-A continued to play hard and finished the set and match with a final score of 25-7. Anderson predicted, “We expect the competition to get much tougher with each round of this tournament.” 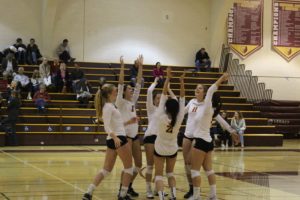 The Bears celebrate their win.