As M-A’s offensive players prepared to execute a penalty shot, shouts of advice directed towards Aragon defenders rang across the field. After the whistle was blown, one player approached the ball, only to fall back and allow senior Toma Frank to score the first goal of the game.

On Friday, April 23rd, the M-A’s boy’s varsity soccer team finished their third game of the season by tying Aragon in an away game and maintaining their undefeated streak. Frank stated that the team “started the game off a bit slow, but [he is] proud of the team for staying focused and finishing the game off extremely well”.

The first half of the game was highly competitive, with possession switching back and forth frequently. Roughly a half hour after the kickoff, the Bears had scored what would prove to be their only goal of the game. Less than ten minutes later, just before halftime, Aragon tied the score.

The first half of the game proved to be more eventful, with the second resulting in no goals for either team. The majority of the half saw the Bears on offense, as defenders Shane Dunlevie and Cole Trigg consistently prevented Aragon from making any advances. Any close calls were blocked by freshman Chase Trigg, who made numerous difficult saves throughout the game.

The very last play of the game offered up a chance to score, as M-A had the chance to throw-in the ball near the opposing goal. However, Aragon’s goalie made one final save, cementing the score as a tie. Senior Shane Dunlevie said that if the game demonstrated anything, it was that, “[the team] can’t base anything of our last season. Last year we beat Aragon by a large margin, but only managed to tie them this year. And that mindset doesn’t just apply to the teams we play but also ourselves. We have a lot of new changes this year that we need to get used to on all parts of the field”. 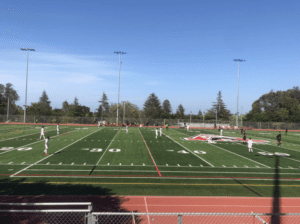 There were sunny skies at Friday’s M-A vs. Aragon game. Photographed by Ally Mediratta