Undocumented Students at M-A React to a Trump Presidency

“My word, my saying, my voice means a lot and I have a dream, a goal, and no one will take it away from me.”

For the last 18 months, the United States has been riddled with tensions that have arisen from racism and xenophobia. On November 8, 2016, Republican candidate Donald Trump was elected president, which has exacerbated the feelings of fear and panic already present among minority communities. Throughout his campaign, Trump continuously expressed his dislike toward undocumented immigrants and had plans to build a wall separating Mexico and the United States, as well as his desire to repeal several acts put in place by the Obama Administration, including Deferred Action for Childhood Arrivals (DACA) and the Development, Relief, and Education for Alien Minors (DREAM) Act.

M-A has a large Latinx population that includes both legal residents/citizens and undocumented immigrants. After the election, many members of the M-A community were left feeling shocked and afraid. The DREAM Club at M-A focuses on empowering students from different ethnic backgrounds as well as legal status in the U.S to continue furthering their education and career goals post high school graduation. Here are some of the reactions of the undocumented population at M-A. 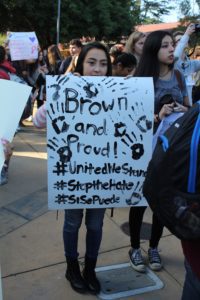 “After the election, I was very surprised, because you hear all these reasons why Trump shouldn’t have won, but then you realize there’s never a good answer. Do we want a racist president, or do we want a president that will go to war with countries that don’t have anything against us? Donald Trump had a lot of air time on the media, and he was so hateful and bigoted that it was almost a given that Hillary was going to win. My family was furious because of all the work they had gone through to bring my little sister here, and that’s understandable, but at the end of the way we’re going to fight for what we believe.”
– Dream Club member, junior

My goal is to graduate from high school, and when I saw that Trump had won, I thought my goals were crushed, and my family felt sad because their goals were also crushed.”
– Dream Club member, freshman

“On Tuesday morning when I was going to school, I heard so much about the election that I was worried who was going to win. While the election was going on, there were so many posts on the media. The majority of my friends have families that come from another country. While the election was going on they were scared about Donald Trump winning because they thought they or their families were going to get deported. After finding out who won, it was a shock for me to find out that Donald Trump won. I was scared and worried about what was going to happen these four years with the new president. I was worried about my friends, family, and people who didn’t want Trump to win. This past week after the election there have been a lot of things happening, like the protests at schools, people fighting, destroying [things], and doing things that are wrong. I think that our community should support everyone and not prove Donald Trump [right] by actually allowing him to deport immigrants. We should be allowed to say what we want but not in a violent way. My word, my saying, my voice means a lot and I have a dream, a goal, and no one will take it away from me.”
– Dream Club member, sophomore

“After the election, I felt disappointed about the results because I knew that a large part of the votes were from Latinx people, and that made me feel disappointed now that our president-elect has spoken badly about Latinxs. This has left the Latinx community with a lot to talk about because we feel afraid about our rights that might be taken away.”
– Dream Club member, junior

After the election, I felt confused since I never thought this would be the outcome. I knew there was a chance that [Trump] would win but I thought it was very slim. I hope that the people in this country can be united and not allow injustice.
– Dream Club member, junior 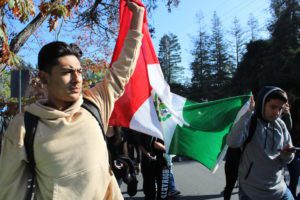 Latino students hold the Mexican flag with pride at the M-A walkout on Monday, November 14.

“After the elections, I felt super sad and depressed and also worried because I thought that my family was gonna get deported to our home country. And also I got worried about my education because if I get sent back to my home country I will have less chances of education and I will not reach my goals.

I never thought that Donald Trump was gonna be the one who won the election because I saw on TV that Hillary Clinton was winning the elections. But everything changed and that night I almost cried and my parents turned the TV off.”
– Emerson Leiva, freshman

“Everyone knows that our next president is not the best choice; Trump is a threat to the United States. Maybe Hillary Clinton was not a choice that the U.S. wanted as well, but she doesn’t represent any fear for anyone. She’s not separating families, [nor] is she taking away opportunities for people that are undocumented, as Trump plans to do. Revoking the DREAM Act or DACA will stop many students’ dreams, students that plan to have a successful life. When Trump generalizes about immigrants being criminals, obviously we know that that’s erroneous. I came from a Latino country a few years ago. I came seeking for a better life, where I can have so many opportunities. So that’s what we want: opportunities, and having Trump on the presidency will not give any of that. We want a better president that will do good for the country and not the opposite.”
– Felix Hernandez, junior