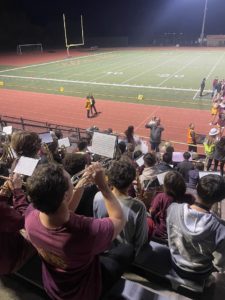 Kurrus conducting the band through “Burn” Photographed by Jayna Chua

With big crowds, talented cheerleaders, and exciting gameplay, football games at M-A are not to be missed! But along with the roaring cheers of the student section, spectators can hear the blare of trumpets and the beating of drums. Composed of the Jazz 2, 3, and Concert Band students, the pep band plays at every home football game. Meant to “pep up” the crowd, the band plays classics such as “Hooked on a Feeling” and “Another One Bites the Dust” during the game. 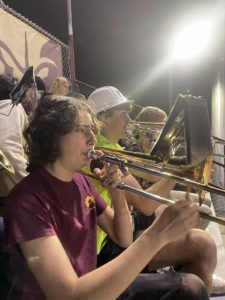 Music Director Kent Kurrus has been leading the pep band for 13 years. “When I came, the pep band left at halftime because with my predecessor it wasn’t as serious of a thing. Changing the culture of the band to actually be part of the game and stay, that was important.” Senior Willem Thornborrow walked through their song selections: “We play ‘Burn’ at the end of the first quarter, and ‘The Final Countdown’ at the start of the fourth quarter.” The pep band chooses a different song to play at every halftime, during this game against Aragon playing “Crazy Train.” Throughout the game, the band also performs songs mixed with cheers and plays the “M-A Fight Song.”

It may seem like a lot of music to learn, but this isn’t a challenge for many players. Junior Carson Sanie told me that it only took Jazz 3 one period to learn everything. “We read it once through and that’s it.” When I asked them what they thought about pep band, they said, “I love it so much. At first I was like, ‘dude, I don’t want to be forced to go to a football game,’ but I get to be involved in it.” Datis Hoghooghi, a senior who plays the trumpet, shared a similar sentiment. He said, “I’ve been doing it since freshman year. It’s nice to watch the football game and just perform. I really enjoy it.” 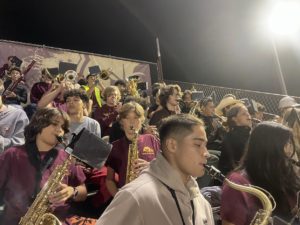 The pep band in action! Photographed by Jayna Chua

Sanie said, “Playing in halftime pieces is fun even though no one listens.” However, I wanted to put that opinion to the test by interviewing some of the audience members; do people actually listen and enjoy the music?

Senior Luke Hanna said, “The band makes it all seem more official and brings it all together. It adds a community aspect to the game, it’s like a hallmark.” Junior Anya Perazich agreed: “It brings out a lot more fun energy and it makes it so there are no silent moments.” Some people go to the games just to listen to the band! Senior Ava Ver Ploeg said, “I sit next to the band so I can hear them more and I don’t have to listen to the announcer.” 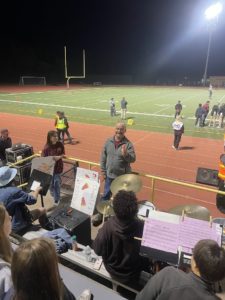 Kurrus with his squirt gun Photographed by Jayna Chua

Students also like to see their classmates in action. When I asked Hanna if he had any friends in the pep band, he said, “Hugo Ingelsson, he’s my boy, I love him to death.” Ver Ploeg said, “Shoutout Charlotte on the flute, she’s my favorite.”

With the pep band’s close proximity to the student section, it’s hard to keep spectators out of the band’s territory. However, Kurrus found an amusing yet effective solution. “This year, for the first time, I’m using squirt guns to manage student populations. I’ve found it’s been extremely helpful.” When someone walked onto the bleachers reserved for the pep band, Kurrus would squirt them until they ran off.

If you want to get an even better experience during football games, standing next to the pep band may do the trick. Just don’t get too close, or you might get shot with a surprise by Kurrus!

Jayna Chua is a senior at M-A this year, and it is her first year of journalism. She enjoys writing articles about student life as well as local art and culture. Outside of journalism, she plays piano and cello and is a Life Scout in BSA.