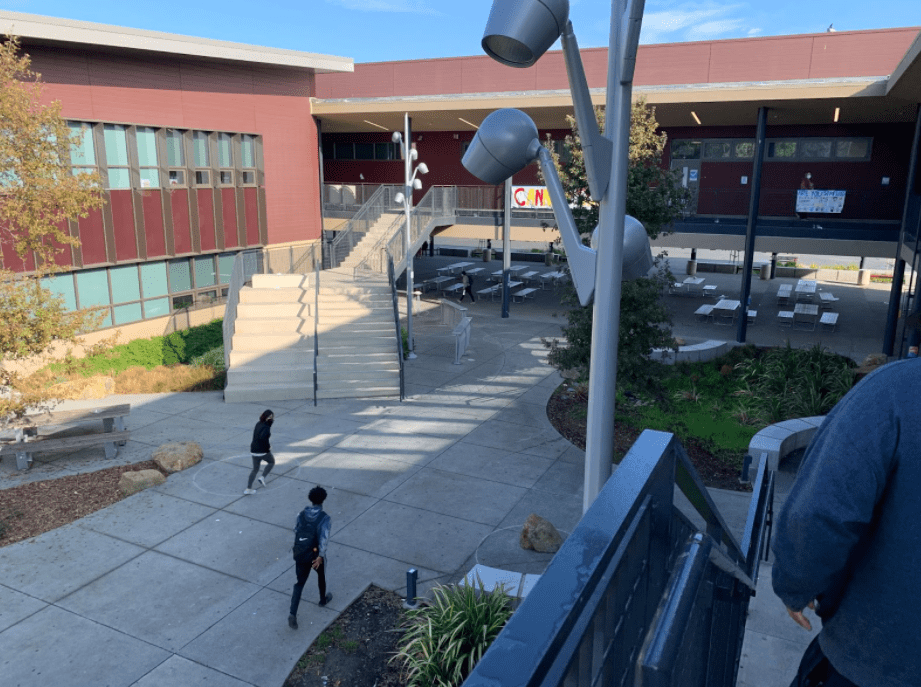 This article will be published in this year’s Winter 2022 Issue of The Mark.

Cover shows Ms. Choe running alongside a student during the final seconds of a hall sweep.

This year, it feels like more students than usual simply aren’t going to class when the bell rings. It has become normal to hear students shouting and running down the halls. When you go to the bathroom, you’re likely to pass numerous students hanging out at tables or roaming around campus. The apparent solution?

The frequency of hall sweeps may be a response to an increase in tardiness and disrespect from students towards staff this year. According to a survey of 42 M-A teachers, 74% reported more frequent tardiness, and 79% reported an increase in hallway rowdiness this year.

79% reported an increase in hallway rowdiness.

English teacher James Nelson said, “The amount of distributed defiant behavior has definitely, definitely picked up. I haven’t measured the difference, but I can absolutely feel it. No question.”

The G-wing is a hot-spot for roaming students, and as a G-wing teacher, Nelson recounted multiple instances where he was met with disobedience when trying to get students to class. He said, “There are people who are laughing, talking while I’m trying to teach class. And I go outside, and they’re just screwing around. I ask ‘Hey, can you be quiet?’ and they’ll actually confront me and say, ‘You’re not my teacher.’”

“The number of students in the hallways is outrageously high, and it’s having a substantial impact on instruction. It distracts students who did get to class on time, and those students who are tardy often miss critical instructions and are likely to do poorly,” commented an anonymous teacher.

Another said, “Students need to be held more accountable for their words and actions. There have been significantly more acts of disrespect this year than in any year that I can remember.”

The root of this defiance is unclear. However, according to the SUHSD Student Services Coordinator Jarret Dooley, “[across the District] we are seeing a lot of [bad] behavior particularly with our freshmen and sophomores and a significant number of suspensions among them simply due to the fact that they never truly transitioned to high school.”

He continued, saying, “It’s really kind of like dealing with two freshmen classes and they’re going to make a lot of mistakes.”

Many students think there are more fights on campus this year, but there are actually fewer than previous years, including the 2018-2019 year which was marked by a significant increase in fights on campus. Administrative Vice Principal Stephen Emmi said, “It’s less fights this year, really. Not even one a week.” So while physical altercations are not on the rise, the data suggests defiance and disrespect is.

Principal Karl Losekoot said, “It looks like, on the surface, that there are more suspensions for A1 compared to the 2019-2020 year.” An A1 suspension refers to a suspension for general disrespect and defiance.

English teacher Erin Walsh said, “the thing I noticed the most is there are a lot of people not going to class on time or taking really long bathroom breaks and then meeting up with people in the G-wing. It’s mostly noise and rowdiness.”

And some teachers are fed up. Nelson said, “[Teachers] didn’t become teachers to go out in the hallway and deal with kids who are rude to [staff]. We’re just over it.”

Another teacher said, “At the start of the year we were told to have grace, be kind, be understanding. It hasn’t paid off. There are some students who are just rude and mean to others.”

Walsh, whose first year at M-A was online, said, “It’s definitely harder than I was expecting to deal with some of the unruliness. It has made it hard for a lot of students and for teachers too.”

95% reported that hall sweeps are effective.

In the same survey, 95% of polled teachers think hall sweeps are an effective response.

While hall sweeps aren’t always ideal—one teacher even commented, “I abhor the loudness of the music and instructions”—they may help reduce tardiness and rowdiness this year.

An anonymous teacher commented, “Hall sweeps are great. They are a preemptive measure to make sure students are in class on time and ready to learn rather than a reactive measure to rally students already late to class.”