Read part one of the Lear Pong tournament here.

After four final games, Women’s Weapons found no cheek they could not stain and were named champions of the 2022 Lear Pong tournament. All teams battled with enthusiasm and prowess, with some games too close to call until the very end.

Student judges applied new rules to the final games to quicken the pace. If a team failed to finish a quote, the chance was turned over to the opposing team to finish it instead. If they finished the quote exactly, two cups were taken away. If a word was different, only one cup was removed. Additionally, if a team made both of their shots, a ball was returned for the chance at a third shot.

A video of the final match is attached to the end of this article. Here are the final battles that left Women’s Weapons the last team standing.

The Dukes of Burgundy, perhaps better suited to the name The Kings of Britain (since King Lear died in the final act whilst the Duke of Burgundy made a single appearance in the first one), were swiftly defeated by Women’s Weapons in the first semifinal game. 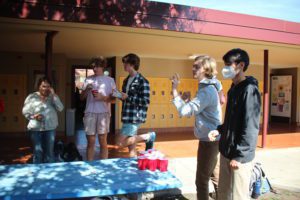 Although both teams fought valiantly, the game quickly came to a close, with the Dukes of Burgundy losing their last three cups in two rounds. Women’s Weapons finished the quote, “Sir, I love you more than words can wield the matter” when the Dukes of Burgundy couldn’t, removing two cups. Both teams missed their shots in the following round and entered a speaker identification round, where Women’s Weapons were first to name Goneril as the speaker of “I have been worth the whistle.” The game ended with all ten of Women’s Weapons’ cups remaining.

Last Tuesday’s game was closer, Gods for Bastards starting with an early lead by three cups, but the gap between the teams never widened by more than four. The game was brought to 2-2, then, after an exchange of points from Ishy Mishra and Anna Patrick, 1-1. After a rimshot from Sam Ha of Gods for Bastards, neither team successfully tossed a ping pong ball into the cups, which made the deathmatch a speaker identification round.

The crowd was silent in anticipation, with both the teams and the audience leaning in to hear every word. AP Literature teacher and Lear Pong host Lisa Otsuka said, “Everyone says ‘shh’ and bends down, it’s very nerve-wracking.” Her further reassurance that “there are no losers in this game” was playfully dismissed, as players were far too invested in the game to listen to anything but the words of King Lear.

Neither team could name Albany as the speaker of the first quote, but they quickly recovered for the next one. Both teams leapt to the correct answer of Gloucester before Otsuka could finish her quote, “As flies to wanton boys are we to the gods.” Although Otsuka heard both teams at the same time, many audience members attested to hearing the Gods of Bastards first, convincing her to split the final point into three sub-rounds, with Gods for Bastards up by one point.

Mishra quickly interrupted the quote, “When we are born we cry that we are come to this great stage of fools” by shouting “Lear,” putting the teams in a tie.

Women’s Weapons was selected to play the fifth semifinals team, The Legitimate Es, who had played in the comeback bracket to re-enter the competition.

Early in the game, The Legitimate Es forced Women’s Weapons back by three cups, but Women’s Weapons’ speed in the speaker identification rounds soon balanced the score.

Women’s Weapons started to make a steady lead, until their momentum was broken “through tattered clothes.” Jackson Bryman and Ron Freeman were unable to finish the quote, turning over the chance to The Legitimate Es. Mark McGuire rose to the occasion, finishing with “small vices do appear,” and the gap shrunk to 3-1 for Women’s Weapons. 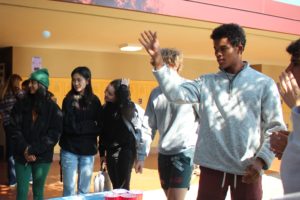 On the cusp of defeat, The Legitimate Es beat Women’s Weapons in speaker rounds twice in a row, leveling the score 1-1.

McGuire hit the rim, and his partner Taran Wan made an air shot. Bryman and Megan Lam’s shots came up short. The final round divided into three sub-rounds of speaker identification.

The first quote, “Out, vile jelly!” was a tie, with both teams naming Cornwall after the first word, “Out.” Women’s Weapons took the first point, naming Lear for “take physic.” They also took the last point, naming the Fool as speaker of the protagonist’s name, “Lear.” Quite obviously, from “Lear’s shadow.”

The long-awaited finale was postponed to Monday due to the line for Homecoming tickets overpopulating the Green last week. However, the wait was well worth it, with Lear Pong taking over the stage and dressed-up guest speakers using a microphone to relay the quotes to the teams. 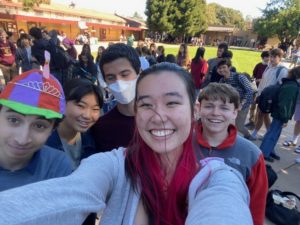 McGuire re-entered the competition for his second time as a new member of Gods for Bastards, according to rules allowing team additions. Throwing skills on both teams were evenly matched, but in the end, Women’s Weapons were faster in speaker identification rounds. The game ended with such a round, and to Bryman’s delight, the deciding quote was, “All thy other titles thou hast given away” by the Fool.

In a follow-up interview, Bryman said, “There was nothing particularly special about the quote other than the fact that it was said by the Fool.” A quote by the Fool won them the close game against the Legitimate Es in their last round as well, which was one reason why Bryman said he had “a special connection with the Fool and his fortuity in helping us win.” Also fitting, Bryman wore his own coxcomb—a propeller hat—during the game, a prop often used to identify the Fool when blocking scenes in Otsuka’s class.

The final score was 5-0, teams shaking hands in the spirit of good sportsmanship.

Friendly competition aside, there may be one champion team, but there are twenty winners. For, in the words of Otsuka, “Anybody who is enjoying Shakespeare is winning.”

Recording of the finale by Olivia Hom is below: