Student-run Instagram accounts have become increasingly popular in various high schools in an attempt to highlight the uniqueness of their schools. While these accounts vary from satirical affirmations to pictures of students’ feet in bathrooms, M-A students don’t shy away from exposing our campus and its student body.

One of the more comical M-A Instagram accounts, @ma.cant.park, spotlights students’ egregious parking abilities. Whether it’s parking diagonally, under a tree, or casually on the sidewalk in the T-lot, you can never be sure whether you’ve parked correctly, so you might as well re-park once or twice. If you’re an amoral sociopath or a Jeep driver, be on the lookout as your car may appear in the hall of fame for terrible parking. A car parked on the sidewalk of the T-lot. 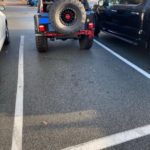 A Jeep parked out of range. 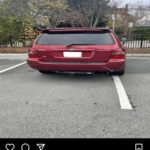 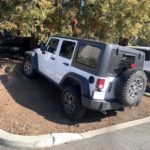 A Jeep parked in a non-designated parking area.

While the student who runs the account remains anonymous, they hoped that “it brightens up their [followers’] days” and that they “have a laugh.” Additionally, they explained how posting these pictures may help students gain consciousness of their parking skills and “begin to realize, ‘Oh, I’m taking up two spaces. When I park on Monday, I’ll do a better job.’”

Senior Daisy Bolaños said she submitted a picture of her car “as a joke between my friends and me. But now that it’s up there, I’m like, no take it down, because I’ve realized my parking skills aren’t great.” 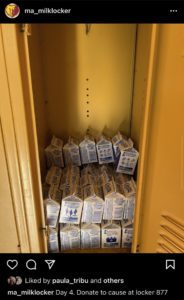 On the other side of the Instagram account spectrum are the two recently conflicting accounts, @ma_milklocker and @ma_churchofbread. In December, students began filling up M-A’s locker #877 with milk cartons students received as a part of their free lunches. “I created it as a funny and harmless joke. Although the joke is over, it was pretty funny, and I have heard lots of people talking about it,” said the Senior who runs the account.

Although the locker was filled entirely with milk cartons, it was recently closed after receiving a notice, and the owner hasn’t “checked on it ever since.” 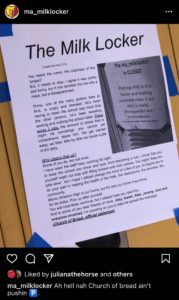 The @ma_churchofbread account was created for “students and more broadly the M-A community to create a well maintained, safe, and efficient learning environment,” said the owner. In January, the members of the @ma_churchofbread decided to leave a note on the milk locker stating how it was disrespectful to the custodians who have to clean it up. Students in the comment section rambled about how it was “just a joke,” and not that “deep.”

Another controversial account, @ma_sleepingpage, posts pictures of students sleeping in classrooms. Some of the photos reveal students’ faces while others are taken with their heads down; nonetheless, students fear an invasion of privacy. Senior Leilani Valencia said, “If I were posted on the account, it would make me feel uncomfortable because I’m kind of vulnerable when I fall asleep in class.” 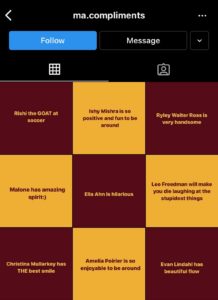 M-A students continue to put a twist on their accounts or bring back nostalgic compliment accounts, like @ma.compliments, which were popularized during middle school. Still, their decisions to remain anonymous ensure that others “don’t get mad” or question their comical abilities by saying, “Oh, they were never funny,” if revealed, said the owner of @ma.cant.park.