As Halloween approaches, people are beginning their search for the perfect costume for their spooky night. There is an entire industry built on Halloween costumes, with no shortage of costumes available for purchase come October. Despite the near-endless choices, however, almost all the costumes look the same. Each woman’s costume, it seems, fits under the same criteria: ample skin and very little accuracy. This deviation shouldn’t really be an issue, as Halloween costumes are meant to be fun, not accurate. However, the ratio of ‘sexy’ costumes to ‘conservative’ ones is ridiculously high.

That’s not to say that sexualized costumes are bad, or that the women who wear them are doing wrong. The issue is that almost all of the commercial options are hyper-sexualized. When asked her opinion on the issue, sophomore Joanna Tasch stated, “I find it frustrating to look at the options available for women and see specifically the women’s market being overly convoluted with hyper-sexualized costumes.” 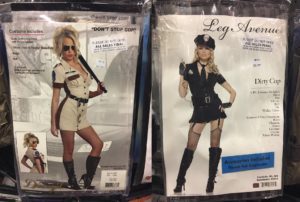 The industry is so flooded with these costumes, in fact, that you do not need to explicitly search for sexy costumes to find them on Google; if you search “woman’s Halloween costume,” the default is sexy. 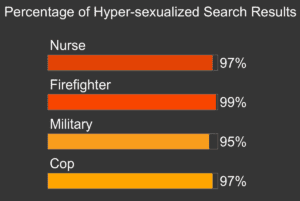 Out of the four working professions searched, an average of 97 percent of the costumes were hyper-sexualized, and of the few that were not, the majority were ‘historic’ or ‘vintage.’ This highly disproportionate comparison between the number of ‘sexy’ costumes to those accurate — or at least somewhat accurate — to their profession is frankly terrifying.

Clothes worn to work are supposed to be functional, and in many of the above professions, keep their wearers safe. To create costumes, many companies alter the outfits so drastically they can no longer serve their intended purpose, and can only be used to display a woman’s body. By doing so, an entire industry perpetuates the idea that the purpose of women, like the costumes it creates, is not to work, but to be sexy. 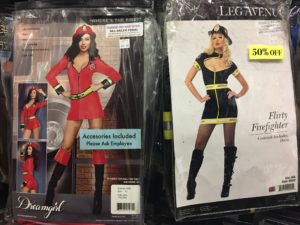 This idea is something that women notice. Sophomore Abby Goudey stated, “Adding the label ‘sexy’ in front of the name ‘nurse’ or ‘waitress’ discredits these real occupations.” In reality, these jobs cannot be performed in the minuscule scraps of fabric and heels that make up many commercial costumes.

The sexualization of women has become so ingrained in our society that it is considered normal. Women have come to expect blatant sexualization because those who perpetuate it claim that ‘it doesn’t hurt anyone.’ Unfortunately, this is the mentality that future generations will follow. Said Tasch, “We are allowing girls to grow up believing that they should be objectified; they will think that this is a completely normal part of our society and that this is okay. They will grow up thinking that this is what it means to be a woman, and that needs to be stopped.” 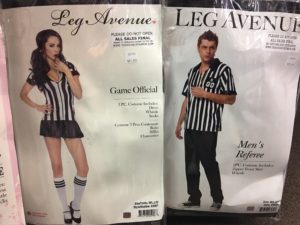 Same profession, but different uniforms. This only encourages that “locker room talk.”

Additionally, even images of young girls are being sexualized. For example, prevalent themes in adult women’s costumes are characters or images from childhood. These, while in theory are endearing and nostalgic, they more often reflect a perversion of innocence. It is one thing to make a grown adult into a sexual object, it’s entirely different to turn a young girl into one. 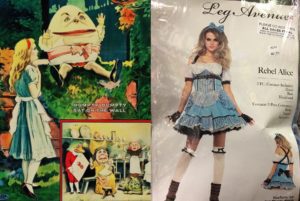 Characters such as Alice from “Alice in Wonderland,” Little Red Riding Hood, and Disney’s Snow White are among the most popular choices for a costume, and they are all characters based on children. However, the costumes representing them are incredibly sexual and hardly resemble their fairy tale origins.

Over sexualizing classic Disney characters is bad enough, but there are sexy baby costumes, and even sexualized costumes of Nemo, the animated fish from Pixar’s “Finding Nemo.” It seems not even ocean life is free from the smut machine. 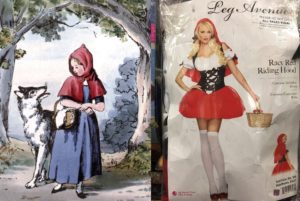 It is disturbing to think that children’s characters are being turned into sexualized images and that an entire industry is promoting this action. Simply put, our society needs to stop fetishizing young girls, as well as, the role models they look up to. Costumes depicting hyper-sexualized professions support the idea that girls and women should only be valued for their external appearances, not for what they can do or the people they are, an idea that has long been ingrained in our society.

Companies that make costumes like these only persist because it is such a lucrative business. For any change to occur, both men and women need to demand it. Again, this is not to say that sexualized clothing is inherently wrong, or that women should not wear these costumes, because ultimately, how they dress is their choice. However, this Halloween, remember that the costume you might be wearing ‘for fun’, can have a deeper consequence; one that enables an industry to continue the objectification of women.