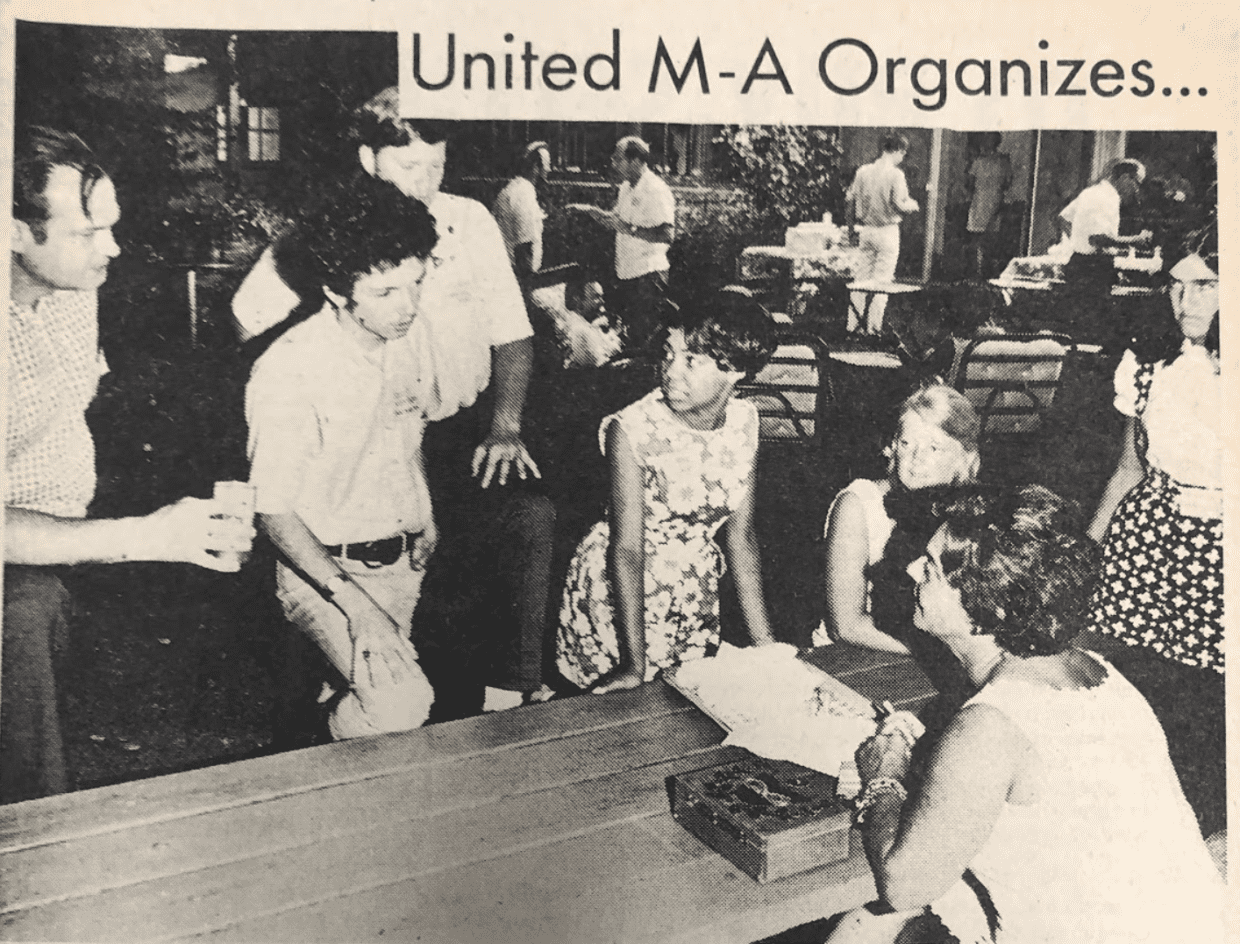 In February of 2020, we published an issue of the Mark with an article describing how M-A went from de-facto segregation to integration in the 1960s. Several violent race riots occurred during these years, leading to a reckoning as a community and a new bussing system for students.

As editor-in-chief of the M-A Chronicle and the Mark this year, I have often been in the position of explaining our journalism program’s intent behind publishing the article and controversial images associated with it.

Many M-A students are unaware of our school’s history. According to the article, there was so much animosity during the 60s, that several Black M-A students are quoted saying, “I have walked up to white students and smiled and said hello. And they turned around and walked away,” and “White students act as if they own the place and are just letting us use it as a favor.”

On the first day of freshman orientation, we’re told that the school motto is “strength in diversity,” and students often complain that the motto doesn’t reflect their experiences–classes aren’t as diverse as the school as a whole.

“Strength in diversity” is an ideal we work to achieve, yes, but it’s also a recognition of our history. We have this motto not just because we take pride in the diversity of our students and staff, but because the motto recalls the story of how we became such a diverse school.

Integration wasn’t a peaceful process at M-A and it required a lot of work.

In the last paragraph of the article, PE teacher Pamela Wimberly, who taught at M-A during the riots, says, “as each generation leaves this earth, the next generation doesn’t remember those things that are behind us, that got us to the point where we were free or where we made change, and all the hardships aren’t known and aren’t remembered.” We published the race riots article to combat this sentiment, and because we believe students deserve to know the history they’re part of.

Alana Hartsell, the M-A journalist who wrote the article, spent her entire first semester compiling evidence and documenting the history of M-A’s race riots. She took absences from class to visit historical societies, read newspaper articles from 50 years ago, conducted lengthy interviews, and read books written about our local community.

During her research, we came across the photo of the poster which threatened racial violence using the n-word and was posted around our school in the 60s. As a magazine staff, we were disturbed and shocked. It is a sad truth that the blatant racism in the poster shows the reality of the tensions in our community during the 1960s. We hoped that when other M-A students saw the image, they would be as moved as we were; that they too would see new meaning in our school motto and recommit to strength in diversity.

Many students and staff members commended the reporting and felt that the inclusion of the poster was justified; but for some, seeing the inflammatory language brought back painful and personal memories. In addition, many experienced the poster without reading the article, or they published pictures of the image on social media. These posts frequently obscured the caption identifying the poster as a historical object. Some students ripped the image out of the magazine and posted it in bathrooms around the school.

We regret shocking those students and staff members who could have benefitted from a warning regarding the image. Our standard distribution process for the magazine, passing it out at lunch, should have been conducted in a more formal manner for such an important issue of the magazine, like in classrooms under the supervision of teachers.

Moreover, we regret that others had the ability to take the image out of context, in effect compounding those genuine and personal feelings of hurt. It wasn’t only students who posted the image in a frenzy; many ill-informed members of the community posted the image out of context on platforms like Nextdoor. Most of the feedback we received supported the importance of historical documents and tough conversations, but suggested that we could have printed the poster in a smaller format with a larger caption, and we wholeheartedly agree.

Including the image as we did ultimately served as a distraction to the more important discussion of our school history we hoped to provoke. We now see including the poster as we did as a mistake. One year later, the conversation about the article still focuses on condemning the distribution of the image and not M-A’s disturbing history.

Looking back, the original article about M-A’s race riots is still worth a careful read. We should feel proud to attend a school where history has taken place–where we have come so far and where we continue to tackle new issues with enthusiasm. Most importantly, we should allow our history to inform our understanding of our school motto; as members of the M-A community, it is our responsibility.

Letter from the editors (published after the release of the Mark): https://www.machronicle.com/printing-the-n-word-letter-from-the-editors/

How the community reacted to our article: https://www.machronicle.com/community-reacts-to-race-riots-article/