Part 1 of The Onion’s argument.

The Onion, a longtime favorite of English teachers at M-A and satirical news platform, has published yet another literary marvel—filing an amicus brief for a case before the Supreme Court, albeit not as monumental as its previous work in the 2005 AP English Language test. Let’s take a look.

Click here to jump to the bottom and learn more about the case.

For some context, The Onion is a comedy website that creates fake news articles to make fun of real world events, deeply reliant on parodying (or looking similar to) actual news websites and headlines. Therefore, in response to a Supreme Court case that could threaten their right to continue to parody, they filed a legal brief in defense of that right, using humor along the way to poke fun at the Supreme Court and the case.

The M-A Chronicle, a longstanding pillar of journalistic integrity, takes its role as a premier fact-checking authority seriously, so we were naturally concerned when we read this brief.

“As the globe’s premier parodists, The Onion’s writers also have a self-serving interest in preventing political authorities from imprisoning humorists. This brief is submitted in the interest of at least mitigating their future punishment.” – The Onion

The Onion continues, highlighting its journalistic record and how the ruling could threaten its business model.

“The Onion’s journalists have garnered a sterling reputation for accurately forecasting future events. One such coup was The Onion’s scoop revealing that a former president kept nuclear secrets strewn around his beach home’s basement three years before it even happened.” – The Onion

Not that this is a competition—it definitely, definitely isn’t. Nevertheless and wholly uncompetitively, the M-A Chronicle published “​​High School Student Gets A Good Night’s Sleep” a full five years before California mandated later school start times.

The Onion argues that for parody to function, it must appear to be real, otherwise it loses its comedic value. They point to their proud record of satirical stories accepted by gullible publications as fact.

“In 2012, for example, The Onion proclaimed that Kim Jong-un was the sexiest man alive.7 China’s state-run news agency republished The Onion’s story as true alongside a slideshow of the dictator himself in all his glory.” – The Onion

At this point, just like The Onion, the M-A Chronicle accepts that “the reader’s attention is almost certainly wandering. That’s understandable. So here is a paragraph of gripping legal analysis to ensure that every jurist reader who reads this brief is appropriately impressed by the logic of its argument and the lucidity of its prose: Bona vacantia. De bonis asportatis. Writ of certiorari. De minimis. Jus accrescendi.” Tu stultus es.

Essentially, in this brief, The Onion argues to the Supreme Court that parody plays a unique, essential role in society and must be, in order to function, initially believable. Thus, “the prospect of chilling parody by imprisoning its practitioners provides equal cause for caution.”

“The Onion intends to continue its socially valuable role bringing the disinfectant of sunlight into the halls of power. See Buckley v. Valeo, 424 U.S. 1, 67 (1976) (quoting Louis D. Brandeis, Other People’s Money and How the Bankers Use It 62 (National Home Library Foundation ed. 1933)). And it would vastly prefer that sunlight not to be measured out to its writers in 15- minute increments in an exercise yard.” – The Onion

On a more serious note, the case of Novak v. Parma would be significant without The Onion’s involvement. The case centers around Anthony Novak, a satirist who created a parody Facebook page for his local police department. 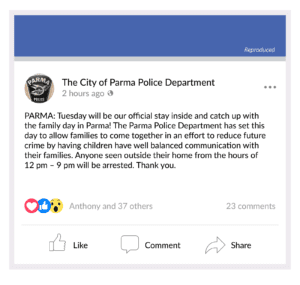 According to Mike Gillis, the head writer for The Onion, “The case of Anthony Novak v. City of Parma, Ohio involves a man who was arrested and forced to spend four days in jail for creating a parody Facebook account satirizing the local police department. Novak sued, claiming that the city had violated his constitutional right to free speech. A federal appellate court ruled in favor of the police, and Novak is now seeking to appeal that decision to the Supreme Court.”

In support of Novak, The Onion filed an amicus curia or “friend of the court” brief. Amicus curiae are briefs filed by organizations not directly involved in a legal case but with a strong interest in the case’s outcome or can offer substantial expert help. Gillis explained The Onion’s decision to file the brief: “parody holds a powerful capacity that’s especially worth defending in the present moment: It gives us the ability to mimic the voice of serious authority and thereby kneecap that authority from within. We can take apart an authoritarian cult of personality, point out the rhetorical tricks politicians use to mislead their constituents, and even undercut a government institution’s real-world attempts at propaganda. We have faith that the Court will see the wisdom in upholding the conventional function of parody and its role in pointing out the idiocies of the world.”