The Mentor Program: Connecting Students and the Community

The Computer Academy, founded in 1981, has long been a little-known gem at M-A. Often described as a “school within a school,” it provides smaller class sizes and “emphasizes college-bound, standards based curriculum while simultaneously developing essential career skills” for just 50 selected students per grade, according to the M-A website.

While M-A’s Academy was the first ever established, around 300 similar programs have popped up throughout the state. All Computer Academies have a crucial requirement: they must operate a mentor program.

Cassia Bradbury is a history teacher for the Academy and has led the mentor program for seven years. She said the program has two levels.

“For sophomore year, I have created a college and career day where the students go through different mini-workshops, one half focused on college and one half on career.” Bradbury shared that “returning Academy students in college do a panel and then help lead the workshops, which is a really cool way to keep the community going.” 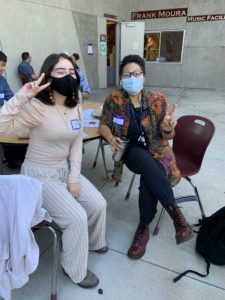 In junior year, “students get paired one-on-one with a volunteer mentor,” said Bradbury. The pairs meet four times throughout the school year, “but they also get the opportunity to do job shadows with their mentor and do separate meetings.” The main session topics include “writing and revising their resumes, planning for grades, and strategizing for school habits. We do mock interviews so the students get a chance to practice interview skills and then we look at planning and investigating colleges, scholarships, and opportunities” for after high school. Bradbury said, “in life networking is so important, and I feel like these kids are learning this skill at a super young age.”

Bradbury said the program has 60 current volunteers of all backgrounds, from “CEOs of tech companies” to “stay-at-home moms.” She added, “It’s really fun to be able to pair kids with someone I know that they would connect with.”

The benefits of the mentor program go beyond the mandatory meetings. Bradbury said that organizing the program takes considerable effort, but “seeing them all work together and open up” to their mentor is a highlight of her experience. “I’ve had mentors end up having their mentee and their family over for dinner, and so it’s fun to see these relationships that probably wouldn’t happen otherwise form and sometimes make a lifelong impact. Mentors have actually gotten their student jobs or even helped students pay for college, which is incredible.”

Gil Vega, a junior in the Computer Academy, reflected on his experience as a member of the mentor program. He said that he enjoyed the sophomore-year workshops and talked to a lot of different advisors. This year, he said, “at first, I was kind of iffy about my mentor because we didn’t know who they were. But then as soon as I met my mentor, we clicked.” Vega explained, “I want to be an entrepreneur, and he was an entrepreneur. We talked about sports, school, college, the day in the life of being an entrepreneur. He gave me a job offer, too.”

Veteran mentor Derek Pecson was introduced to the mentor program through a friend who shared how impactful it had been for someone they knew. He asked if there were any requirements, to which they replied, “really, you just need to be someone who cares about the well being of the students and who has a few more years under your belt than they do.”

He said, “the mentor program is an opportunity for the students in the Academy to meet with adults in the community who have more life experience than they do, and an opportunity for us to share what we’ve gone through, listen to the hopes and ambitions of the students, and see if we can help them achieve some of their goals because of the life experiences that we’ve had.” 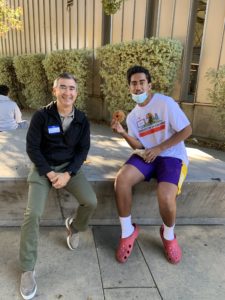 Speaking of his own youth, Pecson said, “I didn’t know what I didn’t know. I only knew what had been done before me by people that I had seen, so I only knew certain paths,” stating that he hadn’t even known his current career existed. Pecson explained that the mentor program hopes to ensure students “have a more holistic view of what their options are during and after high school.” He understands that their path may not match his own, but that he can still “help by listening to the student” and sharing “whole careers that are built around people that have their interests and skill sets.” As Pecson put it, the goal is to show students “there’s no set menu for life.”

His highlight of each year is the mock interviews at the last session. “By that time, students have figured out what their next ambition is and we’ve worked together on a resume.We do this sort of speed interviewing where they take their resume to three different mentors who aren’t their own to interview for a position they describe to the mentor. Interviewing is hard, and it gets a whole lot easier as you practice, so I think this is a wonderful exercise. It’s exciting to help the students prepare to go through this interview process. After we spent all this time with our own students, it’s fun to meet other students who are in the program.”

Pecson has mentored students for years, drawn back by his compassion and the sense of community the program fosters. He said, “one of my greatest joys is that I now see some of the students who were my own mentees or ones I met through the interviewing process. I’ll see them in town and they’ll say hi to me. I’ve seen them for years after they’ve graduated. I’ve gotten to see them achieve their dreams, achieve their successes, and move on in their lives.”