Religious organizations are the epitome of community, and center almost entirely around gathering in large groups, so when Gavin Newsom issued the state’s first stay-at-home order on March 19, 2020, New Community Church had to rethink its structure altogether. 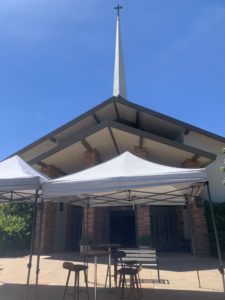 The front of the New Community Church. Photo by Mae Richman

“When the pandemic first hit, the most important thing we could do was make people feel encouraged and connected,” said Pastor Charley Scandlyn. “We had to find safe and creative ways to do that.”

Their transition online first began with recorded services. “We each recorded our individual parts on iPhones,” Scandlyn said. The parts, which included music, stories, sermons, and prayers, were then pieced together. They did this for approximately two months, but it required too much work and time to be practical.

From there they pivoted to zoom services. “It was like an SNL skit. People were breaking in and talking, of the 150 screens there were always three or four people forgetting to mute.” Despite the challenges Scandlyn said, “It was very sweet, and people really wanted to connect.” To adapt to the new digital platform sermons were shortened, and time was allotted before and after services so people could talk to each other. 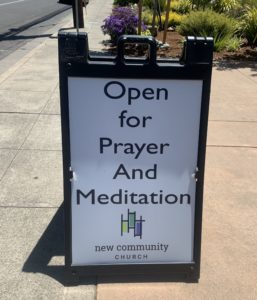 An open sign outside the church. Photo by Mae Richman

To fill in the gaps, the church tried to “be open, but open in a different way,” said Scandlyn. “We had to find creative ways for people to be connected.” The solution: community service. “We had blood drives, food drives, clothes drives, and toy drives. We had meals for the community, meals for TIDE families, and meals for elderly. We even partnered with non-profits who served underserved communities, like the Ravenswood Education Foundation.”

The New Community Church also started an initiative that began at the end of the summer and continued into the fall that created smaller groups for gathering known as ‘home groups’ that took place during the week. “We wanted to step into spaces where people were stressed out and lonely, so asked ourselves, how can we enter those spaces carefully and with sensitivity? What do people really need?” Scandlyn said. “Around 25 people would sign up, and we’d have topics that ranged from marriage tune ups, to bible studies, to young adult groups.” He estimated that upwards of 200 people were involved. “This was a time to be in friendship, and it helped strengthen the community,” he added. 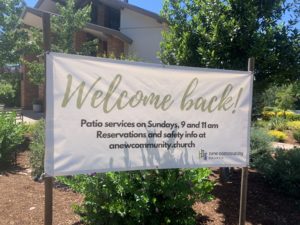 A banner outside the church that reads, “Welcome back,” with information about service times. Photo by Mae Richman

From there they pivoted again. “We waited until after Easter for in-person services,” Scandlyn said. On May 2nd the church hosted their first outdoor service with social distancing. They broke their typical service into two smaller services to reduce the number of people present and continued their live stream for people who did not feel comfortable attending. “The first service was very sweet,” said Scandlyn. “There was lots of love, and lots of elbow hugs.”

Scandlyn said, “Every generation, every community, every church lives through a crisis, and has to think about who you are during this time. We all shared that same journey. For us, we had to think what does it mean now as we reopen. Though the situation might change, that question never changes.”