With their latest release, the Arctic Monkeys have thrown a curveball at the current popular music scene. After the success of 2013’s AM, the British group achieved worldwide, multi-platinum status. So when riff-heavy indie rock was replaced with a keyboard-centered, spaced-out sound that struggles to be fit into a genre, the group’s fans, and much of the music world, were puzzled.

The title, Tranquility Base Hotel & Casino (TBH&C), turns off many would-be listeners. But that seems to be the point for frontman and lyricist of the group Alex Turner, who, judging from his latest work, resents the widespread success the band has received. The title, ‘Tranquility Base,’ references the site of the moon landing, where Turner centers the album around a hypothetical lunar colony, overrun with commercialism and technology. Turner parallels his made-up interstellar world with today’s, using the TBH&C as his platform for his half-satirical, half-pessimistic social critiques. 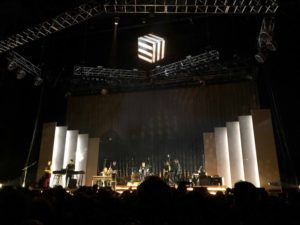 A line of predominantly young adults filled the sidewalk and plaza adjacent to the Civic Auditorium Sunday night. It was the second of two consecutive sellouts for the Arctic Monkeys’ 2018 world tour, in wake of Tranquility Base. The abiding crowd brought up the question: would their latest album’s effort to dissuade fans work?

Judging from the majority of the show, it did not. Turner and the rest of the band put on a high-energy, deafening performance, the audience rarely unenthralled by their setlist. Tracks from the group’s early albums like ‘Crying Lightning,’ ‘I Bet That You Look Good On The Dancefloor,’ and ‘Do Me A Favour’ kept the pace upbeat, as did more recent hits such as ‘Arabella,’ ‘Do I Wanna Know,’ and ‘R U Mine?.’ Turner had no trouble captivating the audience with his charisma and undeniable stage presence.

Four Out Of Five

Don’t Sit Down ‘Cause I’ve Moved Your Chair

I Bet That You Look Good On The Dancefloor

Do Me A Favour

Do I Wanna Know?

Why’d You Only Call Me When You’re High?

As a fan of the band’s music, I enjoyed hearing their hits off AM. However, I was disappointed by how little off of Tranquility Base Hotel & Casino was played in the show. They opened with ‘Four Out Of Five,’ but Turner seemed to treat it like a joke, breaking into a fit of laughter halfway through when he forgot the words. They did play four other songs off the album, including ‘Star Treatment’ in the encore; however, I personally would have liked to have seen TBH&C more central, with their past releases as the sideshow. Instead, it was the other way around. 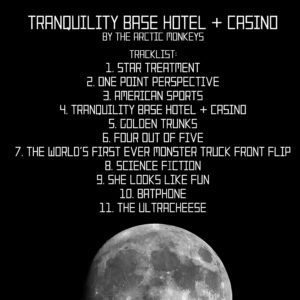 Tranquility Base Hotel & Casino is by no far stretch unique. From its experimental instrumentation to abstract, science fiction inspired lyrics that jump from idea to idea, some will surely feel overwhelmed by the album’s weirdness. But looking past its oddities, the common trends of the Arctic Monkeys’ music are there: the layered virtuosity of the band’s rhythm and guitar sections, their trademark falsetto backup vocals, and Turner’s bravado as frontman, in this instance taking on a burnt-out lounge singer, crooning apocalyptic tales from the digital age.

Apparent in Turner’s commentary on the pitfalls of the 21st century is his disenchantment with being in the limelight. In the album’s opening line from ‘Star Treatment,’ Turner does not shy away from disclosing his own materialistic desires, “I just wanted to be one of the Strokes.” He goes on to elaborate, “I’m a big name in deep space, ask your mates, the golden boy’s in bad shape.”

Throughout the album, Turner displays his cynical views of the media, “Breaking news, they take the truth and make it fluid” on ‘American Sports.’ On album highlight ‘Golden Trunks,’ he targets today’s politics, making a comparison between Donald Trump’s political campaign and the showmanship and brutality of a wrestler, “The leader of the free world, reminds you of a wrestler wearing tight golden trunks. And he’s got himself a theme tune, they play it for him as he makes his way to the ring.”

Most prominent, however, are Turner’s lyrics regarding the influence modern technology has had on himself and society as a whole. He explores its effect on communication (“I’ll be by the batphone, if you need to get a hold”), entertainment (“Everybody’s on a barge floating down the endless stream of great TV”), and convenience (“My brain shrinking, you push the button and we’ll do the rest”).

Critics of the album see Tranquility Base Hotel & Casino’s hyperactive lyricism as shallow ideologically, and Turner’s wordplays as only for stylistic purposes. He may not disagree, as in the album’s title track he riffs, “I’ve been on a bender… Where I ponder all the questions, but still manage to miss the mark.” Additionally, Turner’s sporadic storytelling could be part intentional, as he alludes countless times to technology causing his inability to focus throughout the album (Quite literally in ‘One Point Perspective’, “Bear with me, man, I lost my train of thought”).

The consistent sound and feel of the album’s tracks, as well as their common musical trends and ideas, make Tranquility Base Hotel & Casino a cohesive and unique listen. With it, the Arctic Monkeys have challenged the current state of popular music, executing an album that reinstates the importance of music as an art form, as their counterparts fall into the black hole of the commercialized music industry.