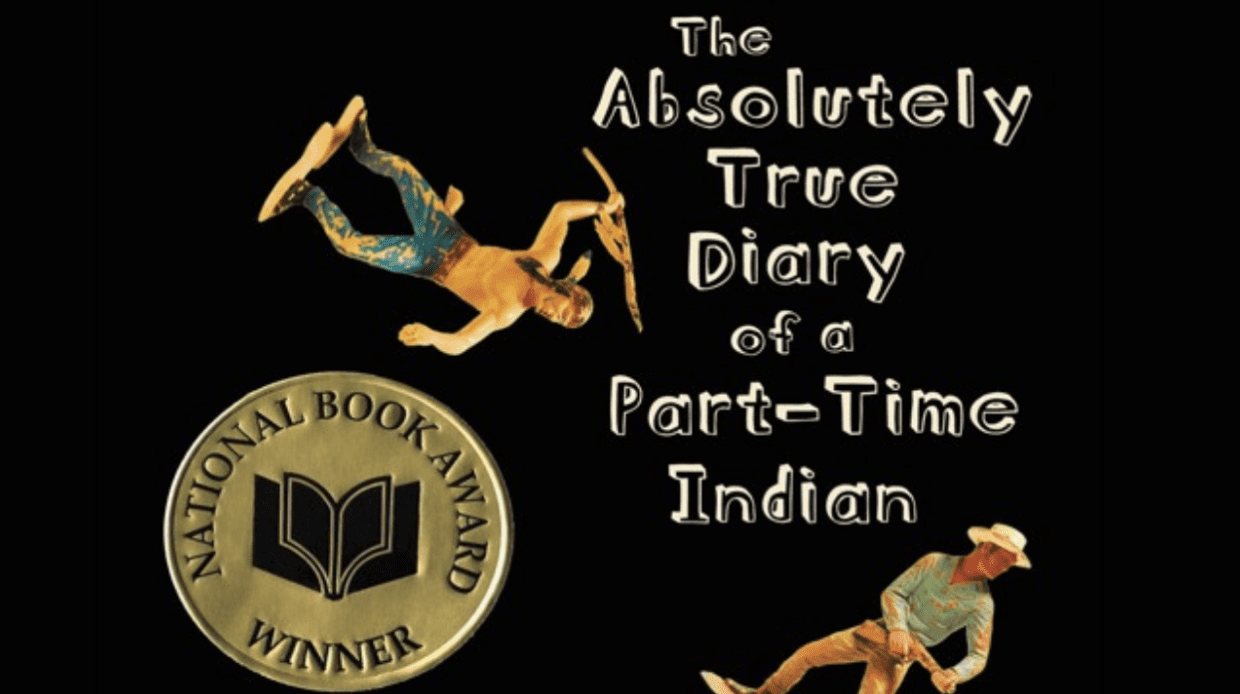 The Absolutely True Diary of A Banned Book

Many books are banned in schools when they contain sexual content, offensive terminology, violence, use of illegal substances, or political content. The Absolutely True Diary of a Part-Time Indian by Sherman Alexie has been challenged and even banned in multiple middle and high schools across America due to its sexual content, racial slurs, and mention of alcohol abuse.

The Absolutely True Diary of a Part-Time Indian is a story of Junior, an Indian living on a reservation, and follows his path in changing schools to a predominantly white school and the issues he faces along the way. He struggles to find his place at his new school and draw a balance between his two worlds. It is partly a memoir of Sherman Alexie’s own life.

English teacher Susie Choe said the book is at “a level that is accessible to students,” but that there are still lots of complicated underlying themes that are prevalent throughout the novel. Junior questions his identity, acceptance, and hope. The novel is based on the author’s experiences as a young boy growing up on a reservation, which adds a layer of relatability and representation.

The Absolutely True Diary of a Part-Time Indian is a common class read in many schools, and M-A is no exception. Choe said, “At M-A, we try to be representative with the books we teach so we’re not just reading lots of material written by dead white guys.” In 9th grade, the novel is taught in the intervention courses. English teacher Catherine Morgan says the book “[deals] with thematic ideas that [feel] relevant for students, pull them into the stories, and generate meaningful conversations and activities.” The book is used as a tool to open up class discussions regarding identity, acceptance and race.

The novel achieved high commercial success after being published in 2007. The book is a story with Indian representation as well as a meaningful perspective on self-identity that lots of teens can relate to. The book has been generally well-received and has a 4.3 star rating on Barnes & Noble.

Morgan largely attributes its success to “the format—a combination of the illustrations by Ellen Forney and the story itself,” which makes it an easy read in terms of the vocabulary and pacing. The book has won multiple awards ranging from the National Book Award for Nonfiction in 2007 to the Carnegie Medal in 2018, in addition to being named a New York Times bestseller.

The book has long been controversial for its material. It has been on America’s Library Association’s Top 10 challenged books list seven times since its publication in 2007. Libraries and schools that have banned the book attribute the censorship to things like its “violence, language and some sexual content.”

In the book, Junior is a sixth grader living on an Indian Reservation, where extreme violence is commonplace. Indians in the reservation are prone to “[getting] drunk and [beating] the sh*t out of any available losers.” In addition to this, Junior describes his best friend Rowdy as someone who has a long history of committing physical violence. However, Ms. Choe mentions that throughout the book “you get this sense of how the Indian community has been wronged,” which is an underlying theme of the novel. The violence that occurs around Junior on a daily basis is meant to emphasize the differences between the white community and the Indian community. He states, “Poverty doesn’t give you strength or teach you lessons about perseverance. No, poverty only teaches you how to be poor,” highlighting the reservation’s deprivation of resources. He follows up by stating “a bullet only costs about two cents, and anybody can afford that” as his father shoots his dog. Violence is a tool Alexie uses to further develop these themes throughout his novel, which has sometimes resulted in the suspension of the book.

There is also some profanity as well as derogatory terms used in the novel. This has been a largely criticized aspect of the book. Contested terms include the n-word, “r*tard,” “d*ck,” “p*ssy,” and “f*ck.”

However, English teacher Sherinda Bryant said that “these terms are not anything your average middle school or high school student has not heard.”

Choe added that as long as one “approaches it in the right manner, it can become a learning opportunity for students.” Nevertheless, its language has been a contributing factor to the many school bans on the book.

The biggest criticism of the book comes in regards to its sexual content. One of the first occurrences of sexual content is on page 25, where Junior spends hours in the bathroom with a magazine featuring naked women, stating “Naked woman + right hand = happy happy joy joy.” Later in the book, Junior’s friend remarks on being “rock hard at the thought of a book.” Most agree that this is a metaphor for being excited. Most teachers agree that it’s the author’s way of intriguing readers, not meant as a literal boner.

The sexual content is part of the reason Morgan makes sure to wait “until November of first semester—if not second semester—until introducing it to [her] classes.” All of the interviewed M-A English teachers remarked that they have not yet had any issues regarding this aspect of the novel. Nevertheless, it is the most common reason middle schools have banned the book.

The book’s themes have certainly contributed to its banning. However, Bryant said she believes that “certain allegations against the author have been the driving force of the ban,” and she added that “that’s mostly what we discussed when considering taking the book out of class at M-A.” Sherman Alexie has recently been accused of sexual misconduct, which has been a cause of the book getting taken out of school curriculums. The book has long been challenged for all the reasons described above, but the ban attempts have surged following the allegations.

Malika is a junior and first-year journalist. In her free time, she likes to read and listen to music. Malika is also involved in soccer and website design.