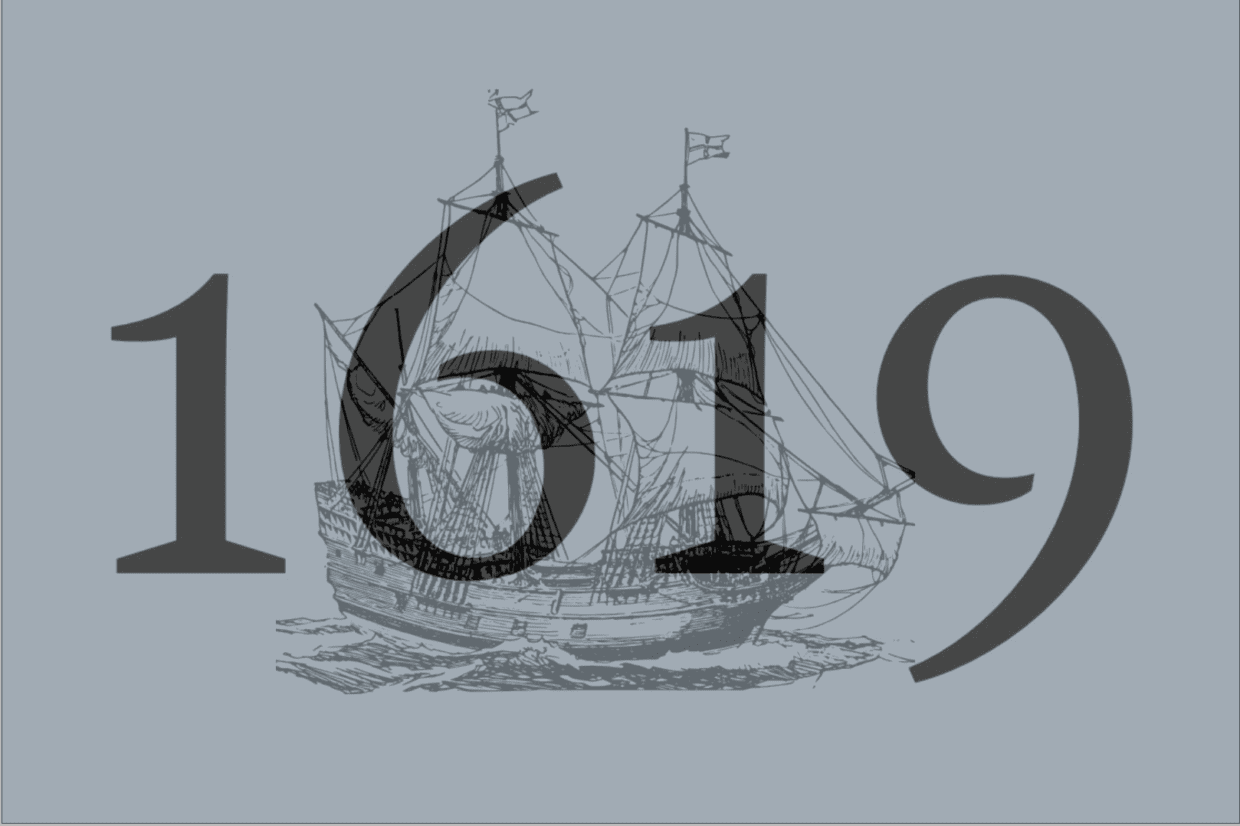 The 1619 Project: History Through the Lens of Racial Justice

by Violet Taylor and Izzy Leake

The 1619 Project, a magazine by the New York Times, spurred national controversy when it argued that America’s true founding was in the year 1619, when the first slave ship landed in Virginia, and that the United States was designed as a “slavocracy.” Despite its controversial arguments, M-A students have read excerpts from the 1619 Project in their US history classes. The magazine, originally published in 2019, won three Pulitzer Prizes, and the project has since expanded to include a podcast and educational resources. However, many historians take issue with the central theme of interpreting American history through a solely racial lens.

US history teacher Anne Olson compiled “a coursewide DBQ on the historiography of the economics of slavery” using the 1619 Project. Document-based question (DBQ) assignments present a set of documents investigating a central question that allow students to interpret a historical situation. Olson said that what made the 1619 Project valuable to her curriculum is that, “it’s literally reframing our concept of US history. The whole concept of the 1619 Project is US history doesn’t start in 1776, or in 1789. US history starts in 1619.” While traditional narratives emphasize democratic ideals and the years of the American Revolution, the 1619 Project argues that the more important year is 1619: the beginning of the nation’s ugly history of slavery and inequality. In a sense, the naming of the project after the year 1619 undercuts conventional history and implies that Americans should regard their history not with pride but with shame.

Mallory Bryne, another US history teacher who has used the 1619 Project in her curriculum, agreed with Olson. “Reading through the project and listening to the podcast has helped me bring in newer ideas to the classroom… Textbooks spend maybe a paragraph on the year 1619, if that, which is not nearly enough when it comes to such an important year in our nation’s history.” A study conducted by the Southern Poverty Law Center found that many American high schoolers lack basic knowledge about the role of slavery in the country they live in, such as the expansion of slavery causing the Civil War.

Numerous US history classes across M-A used Olson’s DBQ assignment, but not all; in fact, several teachers from the history department who frequently give interviews for the M-A Chronicle and Mark refused to speak about the 1619 Project.

A panel of five historians specializing in US history, including two Pulitzer Prize recipients, wrote a letter to the New York Times editor in chief expressing their grievances that multiple sections of the 1619 Project were misleading or factually inaccurate. They stated, “These errors, which concern major events, cannot be described as interpretation or ‘framing.’ They are matters of verifiable fact, which are the foundation of both honest scholarship and honest journalism.”

The letter to the New York Times editor in chief expressed three substantive concerns with the project’s presentation of US history. Besides the three concerns, the letter discussed that the project’s central idea, that the United States was established as a slave state, was originally one that abolitionists rejected and those in favor of slavery promoted.

The first criticism refutes the project’s claim that a direct cause of the American Revolution was the fear that Britain would make slavery illegal. “One of the primary reasons the colonists decided to declare their independence from Britain was because they wanted to protect the institution of slavery.” It is commonly accepted that revolution ignited mainly because England was becoming increasingly more controlling and restrictive, abandoning their previous model of salutary neglect.

History professor at Northwestern University, Leslie M. Harris helped fact-check for the 1619 Project. She said, “Despite my advice, the Times published the incorrect statement about the American Revolution anyway… The United States was not, in fact, founded to protect slavery — but the Times is right that slavery was central to its story.” The New York Times wrote an article to clarify that abolition was a fear of some revolution supporters, but not all, after the feedback from historians.

The second criticism concerns the magazine’s depiction of Abraham Lincoln as an enemy to African American equality, despite issuing the Emancipation Proclamation as an executive order. The project claims, “Anti-black racism runs in the very DNA of this country, as does the belief, so well articulated by Lincoln, that black people are the obstacle to national unity.” The letter writes that The 1619 Project “ignores [Lincoln’s] conviction that the Declaration of Independence proclaimed universal equality, for blacks as well as whites, a view he upheld repeatedly against powerful white supremacists who opposed him.”

The final criticism was against the assertion that African Americans have largely fought alone in their battle for freedom and equality.

Throughout the rest of the project, the articles examine a wide range of topics including healthcare, music, sugar, and the criminal justice system. For example, one article explores how the construction of highways after World War II purposely divided white and black communities, reinforcing residential segregation, a direct cause of the congested roadways that plague America’s metropolises today. The same is true for our community, as Highway 101 was constructed to divide East Menlo Park and East Palo Alto from the rest of the Menlo Park and Palo Alto. Some of these articles faced criticism, but most backlash was directed at Hannah-Jones’ introductory article.

In addition to the alleged factual inaccuracies, many saw Hannah-Jones’ writing style as a problem for responsible discussions of history. For example, King’s Cross University history professor Tom Mackaman, in a 2019 lecture, criticized the 1619 Project for its “anti-historical metaphors,” calling the project “dangerous politics, and very bad history.” These metaphors refer to biological determinism, “that racism is printed in a ‘national DNA,’” and religion, ‘that slavery is the uniquely American ‘original sin.’”

Though our interpretation of history changes over time, Hannah-Jones may deliver a harsh interpretation as a stylistic choice. Traditional interpretations view Lincoln as an egalitarian and champion for civil rights, but now many historians interpret Lincoln’s primary objective to be preserving the Union in the face of tensions over slavery. Lincoln said, “A house divided against itself cannot stand. I believe this government cannot endure, permanently, half slave and half free.” In Lincoln’s Letter to Horace Greely, written a few moths before Lincoln issued the Emancipation Proclamation, he states, “My paramount object in this struggle is to save the Union, and is not either to save or to destroy slavery. If I could save the Union without freeing any slave I would do it, and if I could save it by freeing all the slaves I would do it; and if I could save it by freeing some and leaving others alone I would also do that.” Still, Hannah-Jones claims Lincoln believed “black people [to be] the obstacle to national unity.” In fact, polarizing modern ideas about history could be a tactic to create controversy and encourage readers to reassess their own beliefs about history, but it comes at the expense of aligning with the accepted work of historians and the advice of fact-checkers.

Olson said that some students struggled to reconcile that there could be other versions of history different from the one they had traditionally been taught, a challenge for many of the 1619 Project’s readers. Conversations with M-A students whose classes have used texts from the project revealed that few even recollected using it. Of those who did remember, some claimed that the project seemed ‘subjective,’ or qualitatively different from other texts used in history class. When studying history, students are accustomed to reading textbooks that are written to sound objective; however, textbooks themselves cater to the area where they are being taught or College Board guidelines. For example, a New York Times article shows how textbooks in California and Texas, with the same authors and publishers, are edited to appeal to the predominant political ideology.

Olson said, “Something becomes a historical fact once a historian deems it important, and then another historian also deems that important enough to footnote that previous historian. But it’s really important to acknowledge that for most of US history, those historians have been white men. So they’re interpreting the evidence from their perspective and their point of view.” It is impossible to tell history in a way that is completely objective, but ambitious endeavors like the 1619 Project can help bring forward the stories that have long been ignored. When responding to criticisms about the 1619 Project’s lack of objectivity, Hannah-Jones responded, “Right, because white historians have produced truly objective history.”