Student Bikers At Risk: The Problem and How to Prevent It

While biking to school, sophomore Raj Ghosh slammed into the side of a car after its driver cut him off. He’s not the only one who has been in a crash—since the start of the school year, there have been at least five student bike accidents in the area, four of them from M-A and one from Tide Academy. 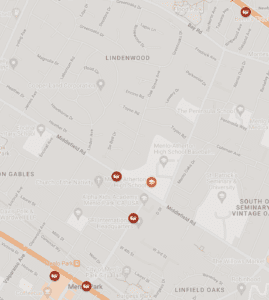 Ghosh was about to bike onto El Camino Real when the driver hit him. He said, “They were coming down from the intersection turning left onto Maloney Street, and then they cut me. I had less than a second to react.” Drivers turning left must yield to other drivers and bikers continuing straight, but this driver didn’t.

Junior Sonia Freedman* witnessed the crash. “Honestly, it was really scary,” she said, “I mean, it could’ve been me. That’s what I was thinking the whole time. I wasn’t even 15 seconds behind him. When he got hit, it looked like he flew in the air.” And it wasn’t due to his own negligence—Freedman noted right before the crash Ghosh’s model biking. “I was behind this kid and I was genuinely thinking, wow, this kid is so good on his bike. He follows all the rules exactly correctly and does hand signs. I should be more like him.”

Whether or not accidents between cars and bikers are increasing, cars need to be especially careful driving around lots of students. Freedman said, “I do think that drivers specifically should not be so distracted. Remember that bikers are literal human beings and not Mario Kart obstacles to get around.” But when drivers are at fault in accidents, what can bikers do? When I asked Ghosh how bikers can reduce the impact of accidents, he had some wisdom to share. “Wearing a helmet made it so much easier to recover. Everybody was constantly thanking me for wearing a helmet. When I was in the accident, I didn’t go to the hospital or anything, but it would have been very different if I wasn’t wearing one.”

We reached out to the Menlo Park Police Department about the frequency of accidents, but they have not yet responded to comment.

*Sonia Freedman is a journalist for the M-A Chronicle.

Jayna Chua is a senior at M-A this year, and it is her first year of journalism. She enjoys writing articles about student life as well as local art and culture. Outside of journalism, she plays piano and cello and is a Life Scout in BSA.