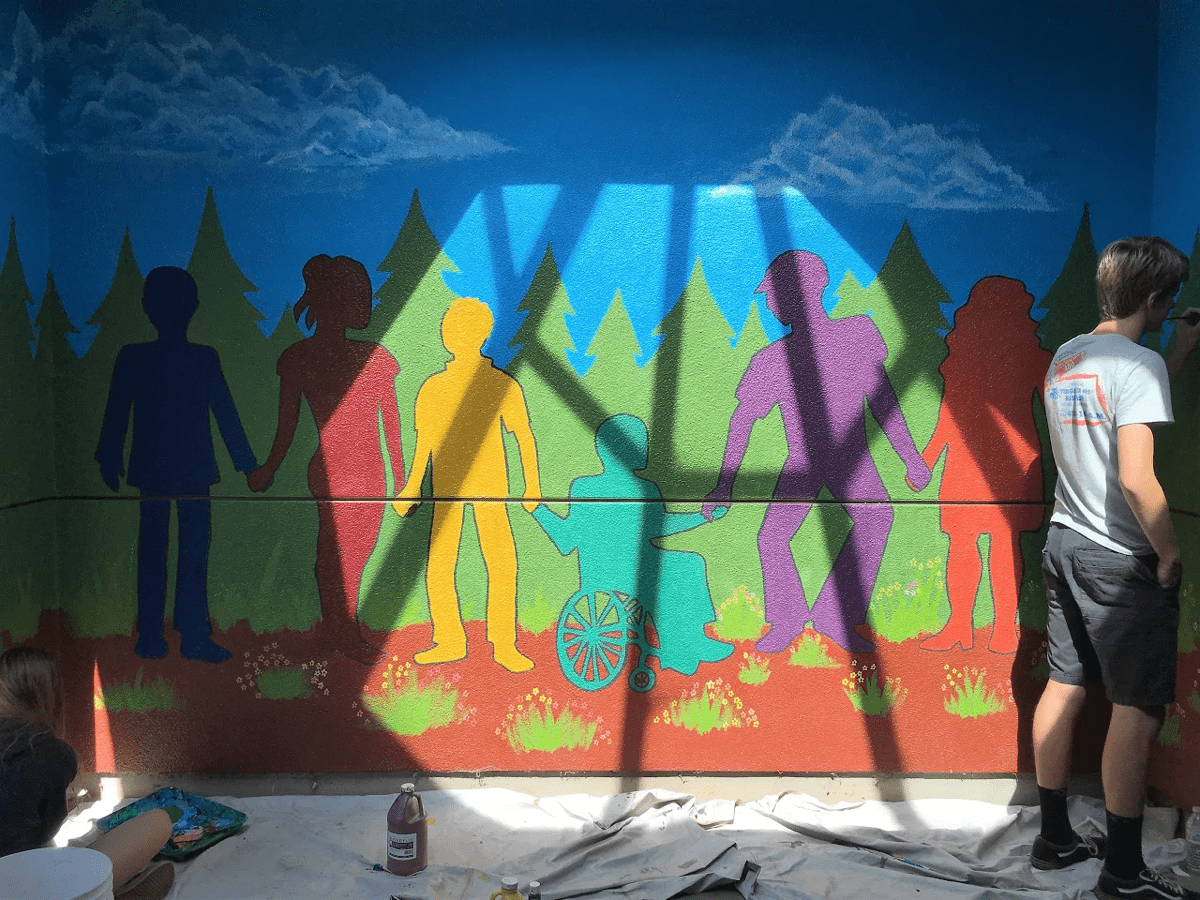 An interactive 360 degree view of the mural

“Strength in diversity,” M-A’s motto, is clearly depicted in its new mural, which is located at the entrance to the F-Wing. The bright colors and inspirational quotations transform this space into an uplifting area to walk through, and a simple reminder to— as the artist’s statement explains— “celebrate and embrace [our] differences.”

Envisioned by seniors Claire Baszucki and Siena Hooper, the mural was inspired by Global Leaders’ annual Guatemala trip in the summer of 2015. On this two-and-a-half week trip, students stayed with host families while doing community service in the area. Students helped to build a school, worked at a hospital, or participated in reforestation. However, the Global Leaders program involves local community service throughout the year leading up to the trip as well. Those who return from the trip have the opportunity to become leaders for the next year’s group and bring back service ideas for future students. While in Guatemala, Baszucki and Hooper brainstormed the idea to create a mural at M-A. “In Guatemala, there was this one area of a building we’d meet in… that was covered in all these really cool murals,” Hooper said of their inspiration. “Claire and I saw those and we were like ‘We want to bring this back to M-A.’” 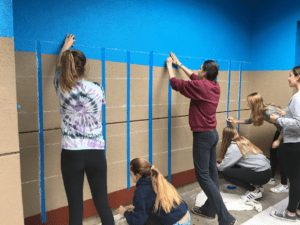 Students work on the layout of the mural.

Baszucki and Hooper began organizing a group of students to create the mural with former M-A student Clara Dewey, a fellow member of Global Leaders. “Once I heard about [the mural], I wanted to help make this project a success,” Dewey said. “I wanted to help pump a bit of vitality and sense of community into what students get to see every day.” Dewey helped organize meetings, coordinate with other members, and envision the project.

Another former M-A student, Vera Kulikov, played a large role in creating and finalizing the mural’s design. While Kulikov was not a member of Global Leaders, she wanted to contribute to the project; her goal was to create a design that embodied M-A’s core values. In addition, she wanted the mural to have a “form and location that could have an actual impact on the students and staff of M-A.” 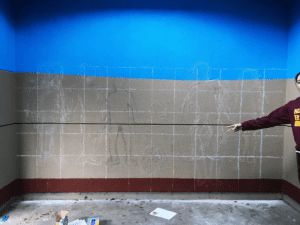 Kulikov stands beside outlines of the mural.

Beginning in early February, the team opened weekly meetings to the entire school. Hooper explained, “We started with just writing ideas of what we wanted to represent, and then we started drawing sketches.” During this brainstorming process, the group decided on a few key themes they wanted the mural to have. Baszucki said, “Because our trip influenced us, service was… the main thing we wanted to convey.” Dewey elaborated: “My vision for this mural was to… inspire students to be an active part of this community.”

Including M-A values in the mural was also important to the mural team. Baszucki commented, “Because it was something that was going to be in the community for a while, we also wanted it to have to do with diversity, which is a main M-A core value.” She explained that they realized they needed “to cater [the mural’s message and design] to the rest of the school as well” because the mural was not just for members of Global Leaders to enjoy. To discuss in more detail what the mural represents and the creators’ intentions, the mural team wrote an artist’s statement, included at the end of this article. 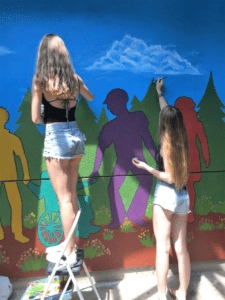 While the mural team created the design of the mural, they also had to take the location into consideration. “We had to work with administration to figure out where it would be,” Baszucki recalled. “We would walk around at lunch and try and scout out locations and try and get them approved, and that was a process that took a while.” After a few false starts, with plans to paint the mural near the guidance office, then at the end of the B-wing across from the library, the group ultimately decided on the F-wing. “We feel like the end location was perfect,” Baszucki said. Past the end of Pride Hall, the mural is situated in the atrium at the entrance to the F-wing, below an octagonal skylight. “It’s definitely more of a space and less than just a wall,” she added, referring to how the mural surrounds viewers as they walk through.

The mural team wanted to include quotations related to themes of service and community, the inspiration for the mural. To choose quotations, they once again asked for input from the community. “We made a Google Doc on Facebook and then had everyone from Global Leaders write on it,” Hooper said. Dewey added that they allowed the “M-A community to vote on their favorite quotations.” From there, the group narrowed it down to the quotations that were the most popular and that best represented their idea. 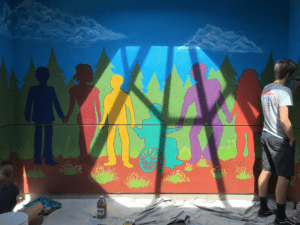 The sun shines through the skylight, casting a shadow on a wall of the mural.

Once the team finalized the design of the mural, Kulikov “converted the hand-drawn image into a digital graph” so that the team could decide on colors and other details about the mural. From there, the mural team began painting, starting in early May and working throughout the summer until mid-August. 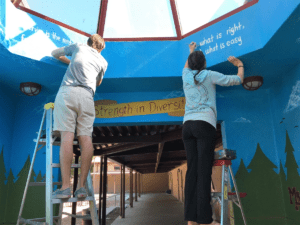 Two students work on the lettering of the quotations.

The quotations and imagery of the mural communicate themes of diversity, unity, community, and service— values that inspired the leaders to create this mural for the M-A community. When asked about her hopes for the mural’s impact on M-A, Dewey said, “I would really love if this mural just made people think for a little about their actions and what they could do on a day-to-day basis to help make M-A a more inclusive and supportive space.” Baszucki shared similar sentiments, saying she hoped the mural would be “a nice thing that you can walk by in the hallway and feel like you’re part of a community.” Hooper also touched on the fact that they intended for the mural to simply “brighten… up [M-A’s environment] and make it so it cheers you up when you walk through.”

This mural not only brightens M-A’s campus and reminds students of our core values, but it also demonstrates the importance of community art. “In some ways, I feel there is no better art than community art. It’s art with a purpose and a personality, and it’s there for everyone to enjoy,” Dewey commented. Kulikov believes “more murals should be incorporated into the school environment” and hopes “the creation of murals and their maintenance becomes a sort of tradition at M-A.”

A panoramic view of the mural.

Artist’s Statement: Throughout this mural… many… factors [contribute] to the central message… that M-A is a place where diversity may flourish… The figures are painted with different colors and traits to reflect the spectrum of cultures and identities present at M-A, and they stand hand-in-hand to represent the unity of this community… The quotes… encourage the viewer to pursue morals encouraged at M-A, such as service, bravery, activism, and determination. Lastly, we placed a … central focus on our school’s slogan, “Strength in Diversity” – a reminder for students to celebrate and embrace their differences. We hope this mural will encourage present and future students to ensure M-A is a place where unity, service, and diversity can thrive.