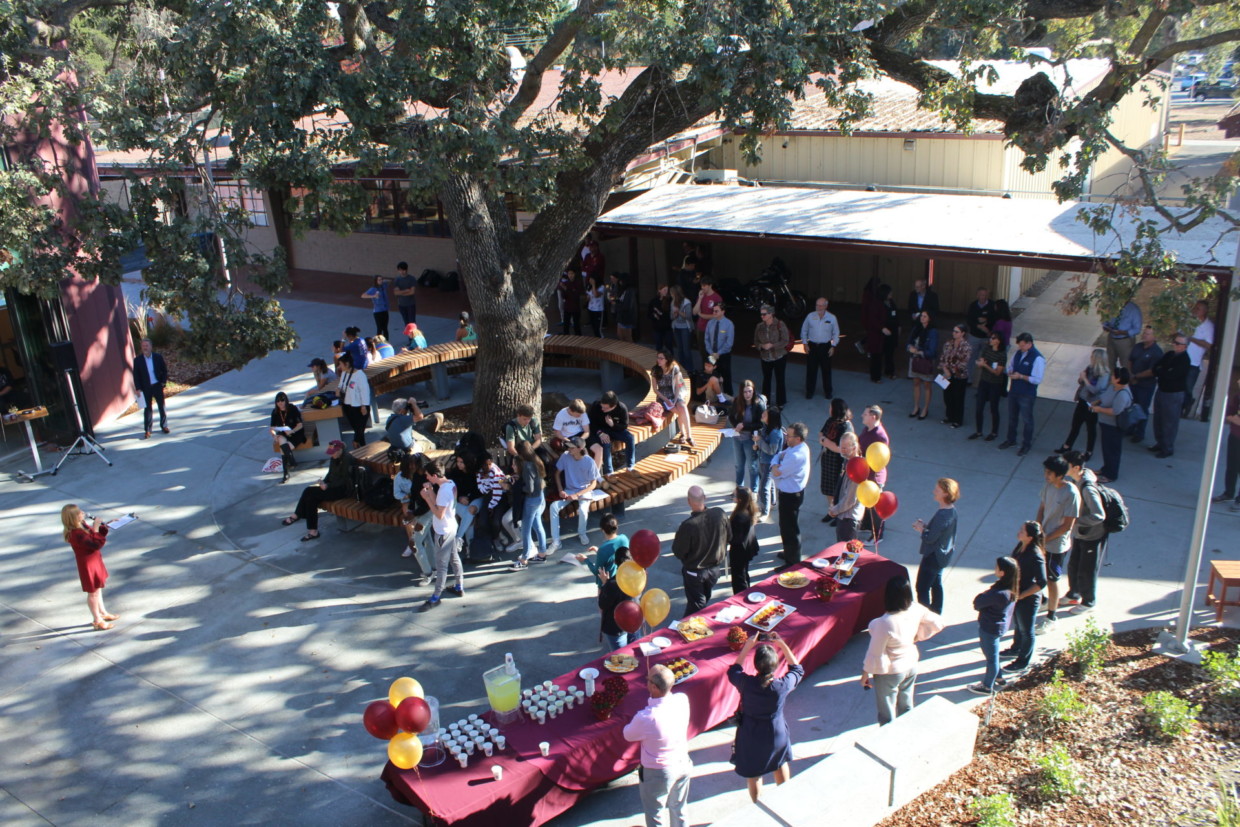 Menlo-Atherton celebrated the opening of the new STEAM (Science, Technology, Engineering, Arts and Math) wing, turf field, and tennis courts on Tuesday, October 30, in an expansive opening ceremony. The event included appearances from the M-A Choir, the M-A tennis team, and representatives from various construction firms. Principal Simone Rick-Kennel made remarks on the administration’s excitement for the new facilities, and thanked an assortment of students, teachers, administrators, and involved construction companies. 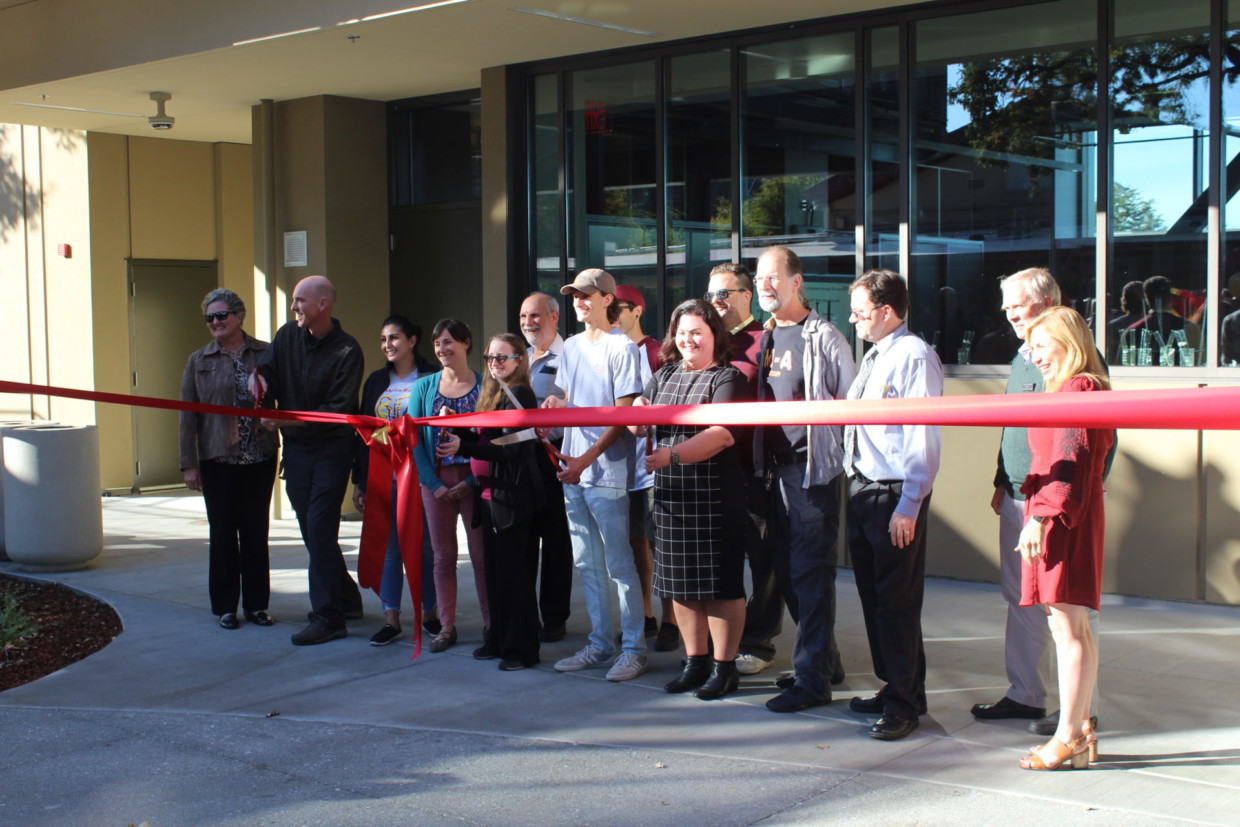 The STEAM building occupies a central plot of land on campus and is a unique, modern addition to the surrounding buildings. The school spent 54 million dollars on new construction for this year, primarily on the STEAM wing and athletic facilities. This construction, made possible by a bond passed in 2013 that was split between Sequoia Union schools, has had many interruptions and delays. 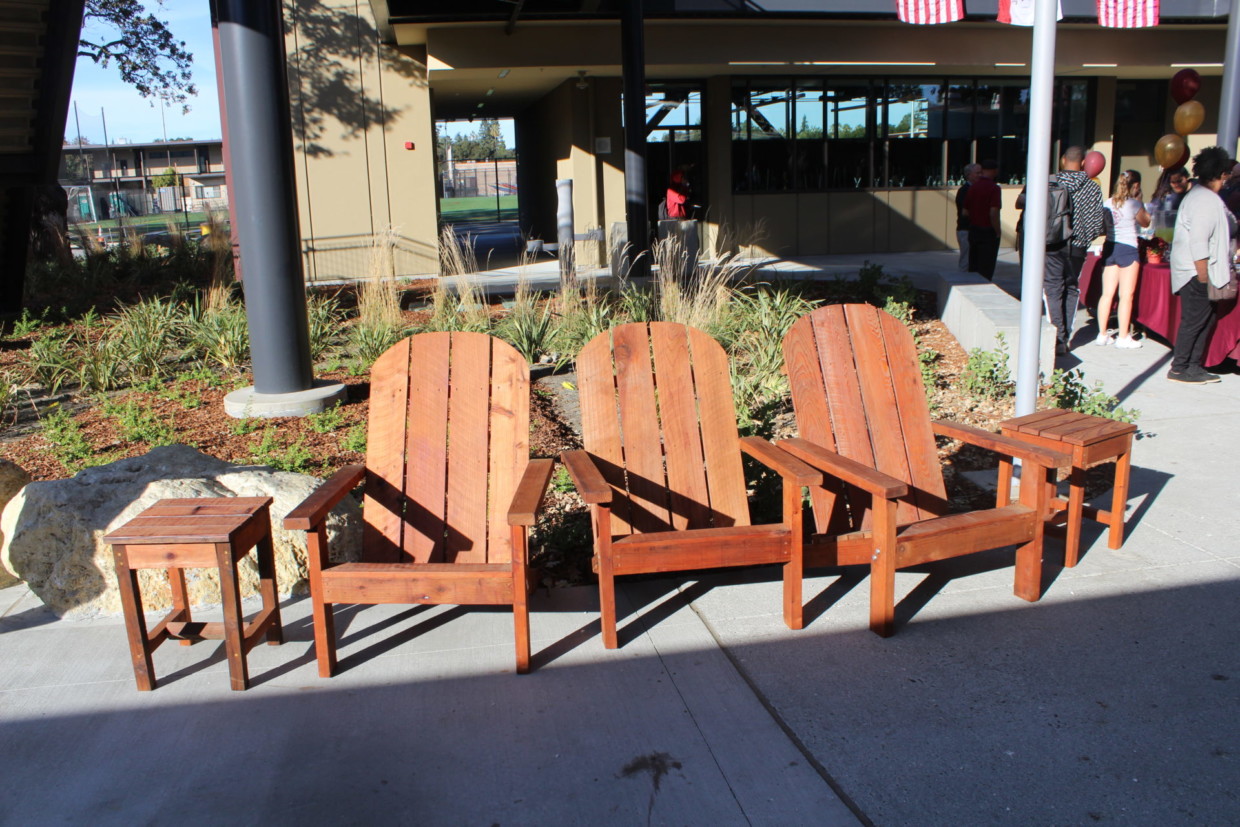 Several Adirondack chairs sit on display, gift of David Hilton as a part of an Eagle Scout project.

In her remarks, Kennel commented on a common concern–the significant delay in construction forcing the wing to open several months into the school year. Although she did mention finishing touches being added in the near future, Rick-Kennel sounded relieved announcing the result of three years of work.

There have been several barriers to on-schedule construction over the past year: school district regulations, construction committees, environmental impact reports, and contractor delays. The process of ensuring accountability in spending taxpayer dollars is thorough, to guarantee effective use. However, this process has had the unintended consequence of delaying critical expansion for a school projected to service 2,600 students by the 2020 school year.

The process of using grant money is much more complex than simply receiving and spending a 54 million dollar check. First, a committee was formed, consisting of parents, teachers, students, and Matthew Zito, M-A’s facilities manager, to assess and plan. Following this, an Environmental Impact Report (EIR) was prepared to understand the ecological implications of this new construction. The EIR for new construction for the 2018-2019 school year found potential issues with M-A’s parking situation, which prompted a traffic audit to further investigate parking concerns, and delayed construction even more. Once the audit put these concerns to rest, new facility construction was finally approved. 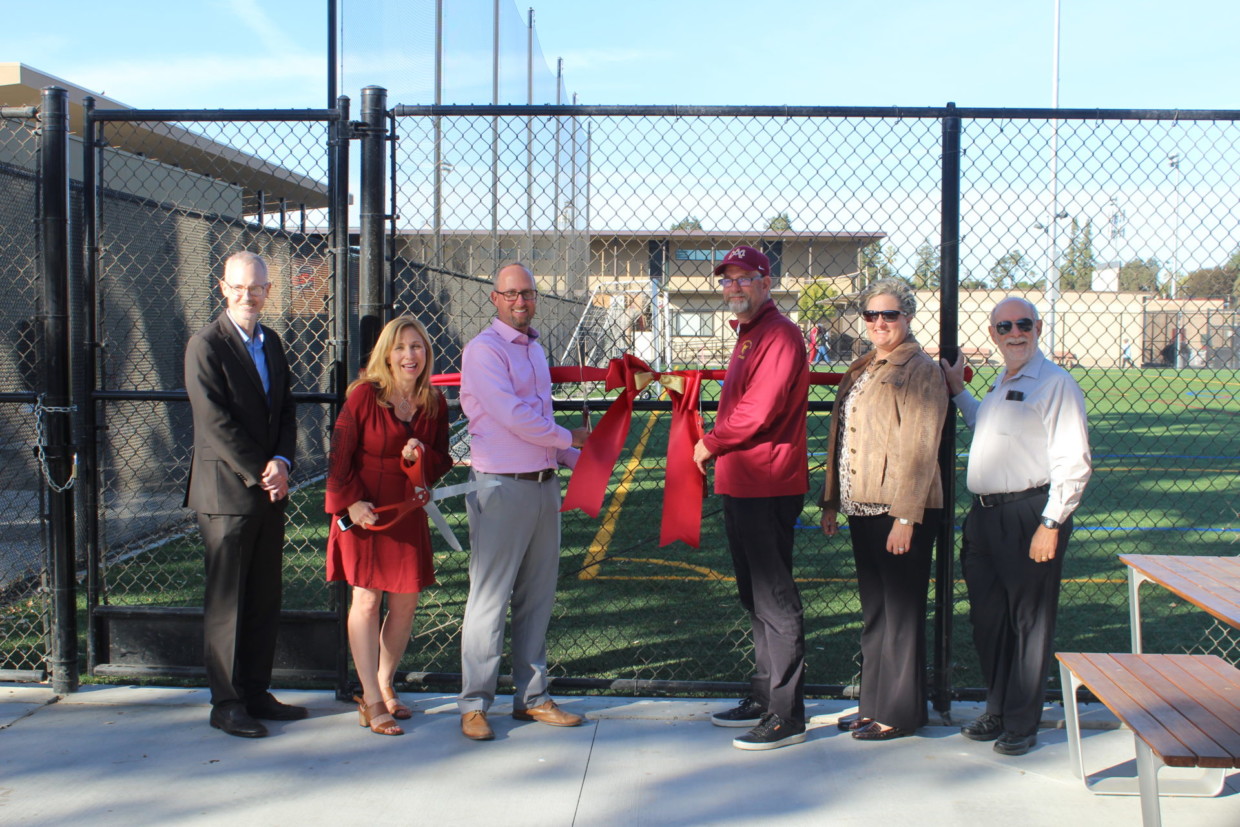 The Sequoia Union High School District requires that the school announce bids for each construction project, in an attempt to hire the most cost-efficient and qualified companies. However, this condition resulted in separate bids for each individual part of construction, leading to Strön Construction redoing the tennis courts, McGuire and Hester redoing the soccer field, and Alton Construction building the new wing all at the same time. In turn, logistical issues plagued the projects throughout the construction process, ranging from a lack of workers to back ordering of construction materials. In the case of the tennis court, delays were the result of unexpected weather, and a re-configuring was required to make sure that the courts could drain rainwater normally.

Despite all of these complications, the opening ceremony went smoothly and served as an effective introduction to the structure. The new facilities are now fully open for use, exemplified in the beginning of tennis practice immediately following the end of the program.