For many years, long stretches of El Camino Real in Menlo Park have been completely empty. However, with the addition of the massive 6.4 acre Station 1300 complex on the corner of El Camino and Oak Grove Avenue, a substantial portion of previously empty land will have a huge building complex that includes apartments, offices, restaurants, shops, and lots of open space. 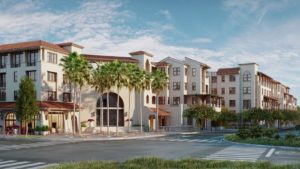 The project started back in 2012, when Greenheart Land Company (GLC) purchased the land from three separate owners. For the next four years, GLC drew designs for the buildings, obtained the necessary permits, and hired W.L. Butler as the general contractor for the project. According to Bob Burke, a principal at GLC, the decision was easy to pick W.L. Butler for the general contractor job because GLC has had a long lasting business relationship. Such a solid business relationship foundation meant that GLC could trust W.L. Butler with such a large project like the construction of Station 1300. W.L. Butler’s manages the actual construction of the buildings, and, GLC, the owners of the land, hired consultants to design and study the development, got all of the necessary building permits, funded the construction, and will eventually lease out office, retail, and apartment spaces to tenants.

The design of Station 1300 will improve downtown Menlo Park in many ways. 28,000 square feet of the design is dedicated to retail space, so tons of shops and restaurants will be added. The addition of shops and restaurants gives citizens a bigger opportunity to spend time out and about in downtown Menlo Park. There will also be 195,000 square feet of office space, and 183 available apartments. The opportunity to become more of a bustling downtown such as Palo Alto or Redwood City is possible with more people living and working in Menlo Park. Station 1300 is even devoting half of its overall space to outdoor areas. The middle of the whole development is a complete outdoor space covered by trees and surrounded by restaurants with outdoor seating, called the central plaza. 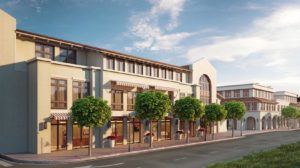 Although Station 1300 will draw more people to Menlo Park, GLC does not expect traffic to become any worse than it already is. Burke claimed that, “development that is close to public transportation options as well as services will generate much less traffic than a similar size development that is distant to basic services or public transportation options.” Thankfully, Station 1300 has multiple transportation options surrounded it. Some of the options include CalTrain, SamTrans, the Stanford University Shuttle, ZipCars, and rental bikes. To combat possibly more traffic, Burke said, “we have implemented a variety of measures to minimize the traffic impact.”

The offices are expected to be completed this upcoming summer, and the apartments should be finished a little bit after the offices are completed, with residents starting to occupy units in early 2021.