In the first Friday Night football game of the year, the Bears defeated the Elk Grove Thundering Herd 40-20 in an exciting game that unveiled some of the Bears’ new talent. 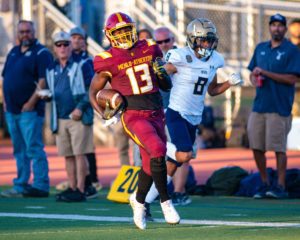 Dickey outruns the defense for a score

In the first quarter, the Bears wasted no time getting on the score sheet with a 79-yard touchdown by senior Jurrion Dickey just 48 seconds into the game. Dickey, a recent transfer from Valley Christian High School, is a five-star recruit committed to the University of Oregon. He has brought a lot of attention to the Bears and has been a clear star on the team. Elk Grove followed up with a touchdown of their own, equalizing the score at the end of the first quarter.

In the second quarter, Dickey scored the Bears’ second touchdown of the game with a 41-yard reception from senior quarterback Billy Johnson, leaping over a defender and jogging into the end zone, putting the Bears up 13-7. 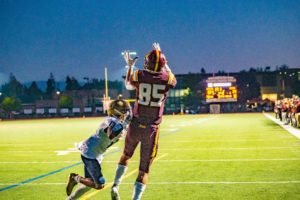 Junior tight end Alek Marshall also put on a show, scoring the third and fourth touchdown for the bears and accumulating 48 receiving yards. His first touchdown amped up the student section, as he leaped and caught the ball over a defender.

Marshall stands at 6’8” and weighs 215 pounds, and he utilizes his size in his game. He said, “I think what I’ve been doing well is making plays. Something I can improve on is my blocking throughout the season.”

Over the course of the game, Johnson threw for 287 yards and five touchdowns. Johnson has recently been named the conference’s number one passer. This is the first season that Johnson has been QB1 for the Bears, and has quickly stepped up to the role with 569 passing yards in just two games. 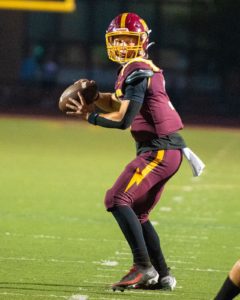 When discussing Johnson’s performances, wide receiver and cornerback Jayden Moss said, “He puts the ball where it’s supposed to go. If he keeps it up, we’re going to go far.”

In the third quarter, Pasimi Vaea recovered a fumble, leading to a 14-yard touchdown for Moss, with 7:30 left in the quarter. This touchdown put an end to the Thundering Herd’s hopes and helped seal the Bear’s win. Moss said, “when I got that first touchdown, it felt great.” He hadn’t played football since his freshman year due to injuries and COVID-19. Moss played on both sides of the ball and hopes for his team to continue its success throughout the season.

Successes like the one at Elk Grove have landed Menlo-Atherton as the second-ranked team in the CCS conference. Now the Bears are working hard to prepare for their away game against Del Oro on September 16th with hopes to keep an undefeated record.