Through use of infrared waves, sophomore Katherine Van Kirk (’19) permeated multiple layers of paint to reveal a hidden composition of a female nude and a landscape beneath Richard Diebenkorn’s “Window,” an image from his signature Ocean Park series. 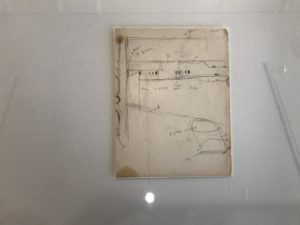 Sketch of “Window” in Diebenkorn’s sketchbook.

Pentimento, the evidence of previous work, has become something of a treasure hunt for scientists and artists alike. X-ray fluorescence has been used for years to discover a holy grail of paintings previously unseen, a collection of works hidden in plain sight, often for hundreds of years.

In 2016 a portrait of a woman was discovered under a work of Edgar Degas. In 2014, an x-ray revealed that the image of a whale had been removed from a work by Hendrick van Anthonissen. 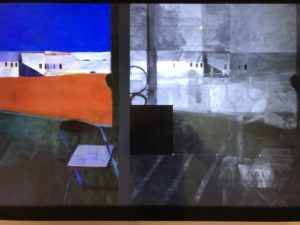 “Window” to the left, side by side with the infared image.

Most importantly, this discovery sheds light on Diebenkorn’s creative process and gives information about the changes made along the way, opening the mind of an artist to an attentive audience.

To see “Window,” along with an interactive “infrared” display, visit the Iris & B. Gerald Cantor Center for Visual Arts in Palo Alto. The exhibit will stay up until August.