Most Students Want a Break from Social Media

Social media is prominent in most teenagers’ lives. A survey done by the University of Nevada shows that over 90 percent of teenagers use social media and that approximately 75 percent have at least one active social media profile by age 17. Social media keeps people connected, updates users on popular trends, and can be informational. However, it can also foster false expectations, high standards, cyberbullying, and procrastination. 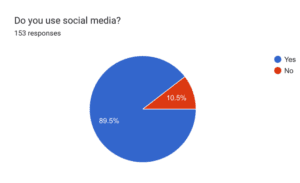 90.1% of students surveyed said they used social media. The most commonly used apps were Snapchat, Instagram, and TikTok, respectively.

When asked “Why do you use or not use social media?” the majority of students surveyed said, “To communicate with friends and for entertainment.” They also wrote that social media is essential to keep up with trends and social events. One student said, “I use it to connect with friends, and if you don’t use social media, you kind of get left out of social things.”

72.5% of students said there were times when they wanted to take a break from social media. Some responses include:

“It’s hard to take a break when everyone around you uses it. Every teen just wants to feel included, and we all have a fear of missing out so it almost feels ‘too late’ to take a break.”

“Social media is awesome, until you are addicted to it.”

“It makes me procrastinate.”

Students also shared some of their positive experiences with social media use. One student wrote, “I have a 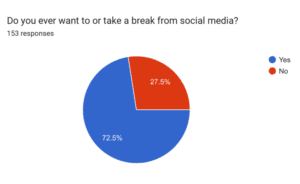 pretty healthy relationship with apps like that. I usually only use them every couple of days, so I don’t feel too ‘addicted.’”

Another sophomore student wrote, “Practicing self control and time management with social media is vital for mental health.”

Social media can be a place for people to find communities with which they identify and share interests. One sophomore student wrote, “I started using social media because I saw everyone talking about it and I wanted to see what it was about. I liked the idea of ‘putting myself out there’ and getting good feedback from other users felt nice.”

A Sophomore said, “I like to look at art and content made about media I enjoy, as well as looking at posts about my hobbies. There are also many communities for different identities, like being queer or disabled.”

Sophomore Samuel Goldman said, “People start using social media and then they feel like they can’t stop using it. People who use social media forget that real social interaction exists, and that they should go out and pursue that.”

According to Freshman Ashley Arnello, “People struggle with always comparing and contrasting themselves with the people that pop up on their social media feeds. Most people my age are now looking more into trying to look and act like others when I don’t really think it’s necessary.”

Our survey results show that most kids start using social media at 13, which is also the minimum age users are allowed to create accounts on apps like TikTok, Instagram, and Snapchat.

Research on the effects of social media by social psychologists Jenna Clark, Sara Algoe, and Melanie Green states, “Social network sites benefit their users when they are used to make meaningful social connections and harm their users through pitfalls such as isolation and social comparison when they are not.”

When social media is not used in moderation, it can lead to people having an unhealthy relationship with themselves and reality. There are pros and cons of social media, but most M-A students can agree that social media can build beneficial connections and relationships.