So Why is My Prom Ticket So Expensive?

As the final few days before prom closed in, last-minute ticket buyers could be seen on the green begrudgingly forking over the hefty 80 dollar fee (150 for couples) to attend that essential high school dance. Come April, the cost of prom tickets is consistently a common complaint among prospective prom-goers at M-A, as the added prices of an outfit, transportation, possibly dinner, and hair and makeup for some, quickly stacks up to a formidable bill. So what is it that makes prom tickets so expensive?

The simple answer to that question is that hosting prom in San Francisco comes with a large price tag. This year’s was hosted at the Regency Ballroom, an upscale concert venue that can be rented for private events — such as our prom. 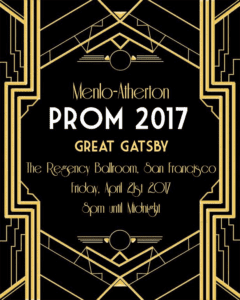 This year’s prom was held at the Regency Ballroom in San Francisco.

“The biggest cost we have to deal with is the price of the venue,” explained Kara Mullarkey, a leadership student on the prom committee.

In addition to the cost of the venue, leadership hires an event coordinator. “Then our senior class advisers and the people on the prom committee decide the decor, what kind of food we’re gonna serve, the DJ, any other bells and whistles,” Mike Amoroso, the leadership teacher, added.

All those fees stack up pretty quickly; this year, the bill was around 40,000 dollars. Furthermore, ticket sales from prom fund the senior class graduation, which requires about 10 to 12,000 dollars.

Leadership has made various efforts to keep ticket prices down. “As a school, we have decided that Friday venues are a better opportunity to hold prom, because if you do it on a Saturday then it’s 10,000 dollars more,” Amoroso said.

Other efforts include using funds from the student store to pay for food at prom — a bylaw added last year to M-A’s constitution by alumnus Jackson Goudey — and minimizing decor costs. “We’re spending only maybe 100 dollars on other decorations and centerpieces, so we definitely try to cut back our costs as much as we can, while still having a really cool event,” Mullarkey explained.

Finally, there’s the incremental ticket system, where prices gradually go up from the first week of sales. “Actually, if students were to buy their tickets the first or second weeks of the prom sales, we would be losing money,” Mullarkey remarked.

However, some students feel the incremental system isn’t ideal. “I feel like the prices go up too much every week,” opined senior Samantha Gamez. “If it started a little earlier that would make sense because it would give people a little more time.”

Leadership has also explored fundraising options including a raffle last year (which was shot down by the district because it was considered gambling), car washes (which are no longer a good idea because of the drought), and collaborating with local business like Amici’s (although turnout to this year’s fundraiser was not that high).

Nevertheless, the primary cost remains holding prom in San Francisco, where venues are quite pricey. Amoroso mentioned that he has been looking to move prom to a venue in San Jose that is significantly cheaper. However, he added that, “We [leadership] polled eight classes last year and… about 87 or 83 percent [said] that they wanted to go to the city… It’s kind of a tradition here at M-A that we hold [prom] up in the city.”

However, not all students agree that holding prom in San Francisco is necessary. “I get how the city is a special place, but I feel like not a lot of people end up staying in the city after prom,” said senior Baylee Schroeder. “Prom could pretty much be held in any cool venue… I just don’t feel it’s necessary to hold it in the city.”

Gamez added that “[the cost of] transportation there and back can be a lot if you’ve already paid for dresses and stuff.”

While the high price of tickets might be justified, the fact remains that that cost is not feasible for all students. One option for low-income students is to take part in the Toil for Tix program, where students can do six hours of community service and get a free prom ticket. To participate, they just need to visit Amoroso in B-21 and fill out a form.

Amoroso estimated that leadership “gave away 50 prom tickets last year, and as of this year… 83 tickets.” He added, “I don’t want to exclude anyone from going to their prom.”

Other programs like the statewide organization the Princess Project, which the M-A Student Services Center in B-20 coordinates with, gives away prom dresses to students who otherwise could not afford them.

Despite these alternatives, affording prom is still a struggle for some students. Furthermore, excessive prom expenses are not unique to M-A. A 2015 study by Visa revealed that on average, the American teenager spends 919 dollars on prom, indicating a societal trend of overpriced proms. Ultimately, prom costs will remain steep at M-A as long as it continues to be held in expensive, distant locations.