Should 16 year-olds be allowed to vote?

After the March for Our Lives protests across the nation and other student protests for gun control, young voices have become more and more present in the news. Students who survived the Parkland mass shooting in February met with Donald Trump, interrogated the NRA, and spoke to crowds of thousands about their push for gun legislation. These high schoolers, along with many others, are clearly educated and passionate about politics, so here’s a question: why can’t these young adults vote?

These protests have brought back the idea of lowering the voting age to 16. D.C. Council member Charles Allen reintroduced the bill to lower the voting age on April 10. His rationale is that, “At the age of 16, our society already gives young people greater legal responsibility. They can drive a car. They can work. Some are raising a family or helping their family make ends meet. They pay taxes,”…and yet they cannot vote.

I decided to see what M-A students believe. I surveyed 100 M-A students anonymously online. The results, shown below, reveal that most of those surveyed thought lowering the voting age was a bad idea. 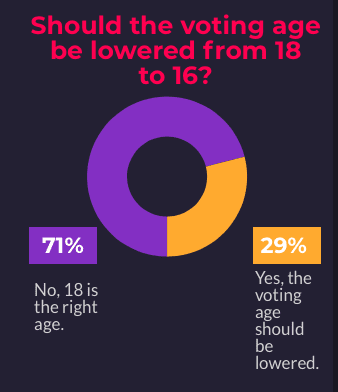 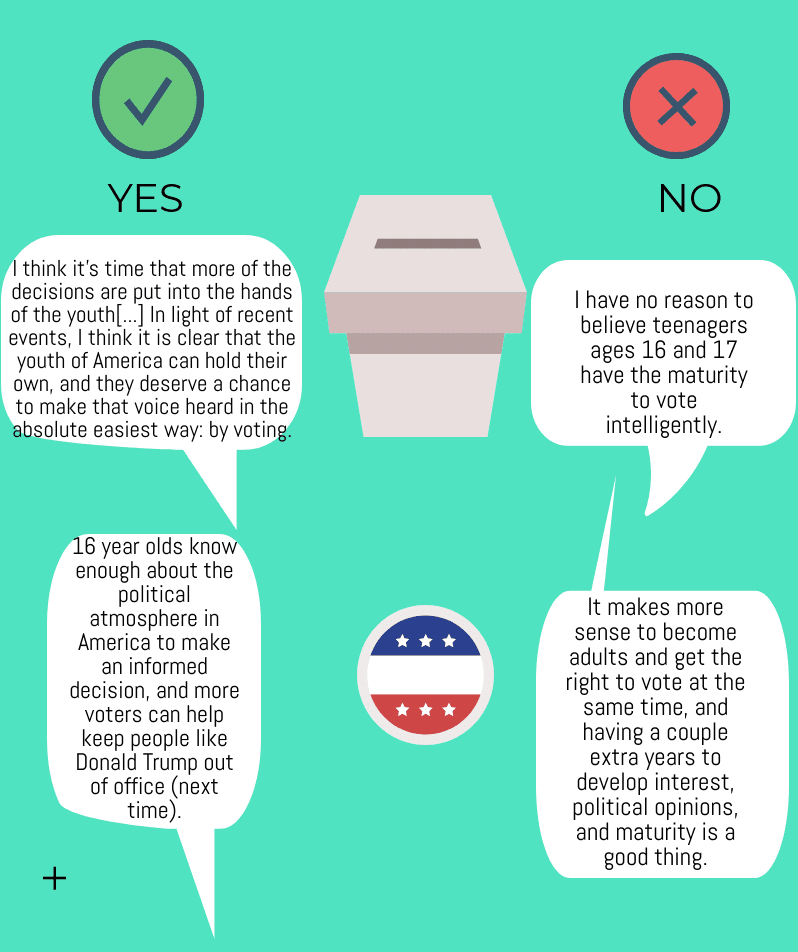 One argument against lowering the voting age is that 16-year-olds are still minors living with their parents, and their political views are too easily influenced by their parents. You would predict that they would simply vote like their parents. However, in 2014, 16 and 17- year-olds were able to vote on the Scottish referendum. A study shows that over 40% of the 16 and 17-year-old voters voted differently from their parents. If the U.S. is similar to Scotland, young voters would make up their minds and block out parental influence.

Other arguments are that teenagers are not mature enough to make political decisions, that they would vote based on emotions rather than making logical decisions. In other words, they would use what’s called hot cognition instead of cold cognition. Interestingly, a study shows that cold cognition is actually developed by age 16. Using that logic, 16 year olds should have the ability to make reasonable decisions just like adults can.

Lowering the voting age could actually increase voting turnout. Imagine a society where teenagers did vote. This could lead to a lifelong engagement with politics and civic issues. Recently, the percent of young voters hit an all-time low. In a 2014 midterm election, only 19.9 percent of the voters were ages 18-29. Perhaps if teenagers were exposed to voting earlier in high school, with their schools educating them on the whole process, they would be more involved in politics and civic duties.

Right now the world is celebrating the young adults who walk out and advocate for gun laws, but instead shouldn’t we let them vote on the issues that will actually affect them? Following the Parkland shooting, student protestors talked about the older generation failing to protect them— perhaps shaking things up in our voting process would change how our nation deals with guns, and who our nation elects (or does not re-elect) in 2020.