Most athletic. Most spirited. Best style. Most likely to become famous. Worst case of senioritis. Senior superlatives give the student body power to reflect on their high school career and select their peers for awards. With the exhilaration of nominating students, it is easy to ignore the lack of diversity in senior superlatives.

What makes these statistics even more detrimental to M-A’s student culture is our motto, which is somewhat ironic in this situation.
M-A takes pride in having “Strength in Diversity,” but when we see significantly more than 50 percent of those receiving a superlative are Caucasian, we are not remaining true to this value. Senior superlatives are supposed to represent the entire graduating class, and by only nominating one ethnicity of our diverse student population, we undermine our school’s motto and submit to the racial separation at M-A.

Additionally, when we see every student given “most likely to become a CEO” is either Caucasian or Asian, we perpetuate the idea that only people of a certain race can be successful rather than promote that minorities can prosper as well. Likewise, categories which could easily include people of various ethnic backgrounds in the student population such as “best duo,” “best person to bring home to your parents,” or “most sarcastic” lack variety. While senior superlatives are not the most important activity in the world, it is crucial that people who are nominated as the best in a category don’t just represent one ethnicity of the student population, that we are aware of this fault, and that we actively work to bring change to the status quo. 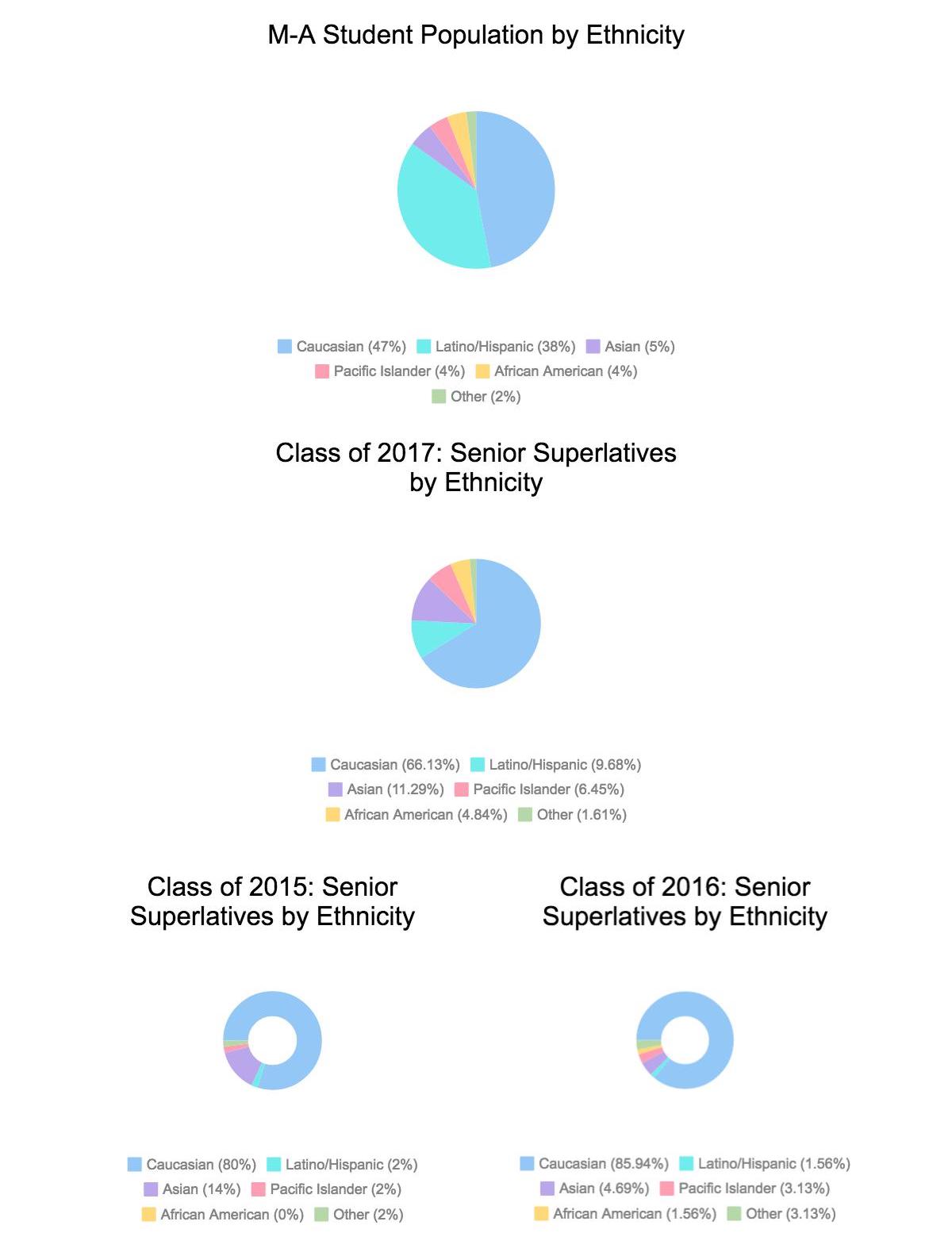 Senior superlatives are just one example that clearly illuminates the racial divide in M-A’s student culture. In my opinion, the lack of diversity in these awards stems from two main sources: the daily segregation between races and the accessibility to voting.

The disconnect between students of different races is a huge factor that prevents real strength in diversity where students can interact and collaborate with a diverse group of their peers. Senior Annabel Yau elaborated on this idea and shared, “Due to the separation of students within both academics and extracurriculars, there is a lack of interaction between students of different backgrounds. There are many students that aren’t recognized for their accomplishments simply because they haven’t had the opportunity to get to know most of the student body. I strongly believe that senior superlatives should reflect the great diversity of our entire senior class. However, the only way to improve the process is to eradicate the systemic division within our school system.”

In a more integrated community, the seniors receiving superlatives would likely come from a larger variety of backgrounds that better represent M-A’s racial composition, thus promoting our school’s values of diversity, respect, and empathy.

A simple step the M-A community can make to increase diversity in senior superlatives is to reform the voting procedure. Sarah Frivold, M-A’s Yearbook teacher, has worked tirelessly alongside the Yearbook Staff to modify the awards and the senior superlative nomination process to increase voter turnout and thus, have a more diverse selection of students. This year, the yearbook staff altered the superlatives from rewarding physical traits, such as having the best eyes, hair and even legs, to more humorous awards rewarding character, personality, and skill.

The Yearbook staff has taken large strides to improve M-A’s senior superlative process by increasing accessibility to the student body as well. In previous years, the selection process would take place on the Green using paper ballots, which was both time-consuming for the yearbook staff and environmentally unfriendly. More importantly, the population that sits on or near the Green during lunch is mainly Caucasian with few students of other ethnicities.

This school year, Frivold and the Yearbook Staff devoted themselves to reforming the voting process and create a more equitable system. The new method consisted of an online Google form which was advertised via M-A Today, the announcements, the senior Facebook page, and by student email where students were given an entire school week to respond. If students did not have Internet access, Frivold also encouraged them to vote in her room during 0 period, lunch and after school. While voter turnout increased with about 60 percent of students responding, the sad reality is not all teachers play M-A Today and thus, uninformed students cannot vote during Silent Sustained Reading (SSR), and the majority of the senior Facebook group is Caucasian.

While we can observe improvement in the racial distribution of senior superlatives for this year’s class, we still see under-representation of students, particularly in the Latino/Hispanic community. A potential method to better the process in the future is to have teachers distribute Chromebooks to seniors during SSR for one or two days in a given week, and allow them to vote using the online Google form, ensuring that every student is aware and has an opportunity to vote.

The Yearbook Staff has made many progressive steps in making senior superlatives more diverse. However, it is apparent that this is still not enough. In order to truly have strength in diversity, the people representing M-A’s graduating class must come from a larger variety of racial backgrounds especially considering our school’s wonderfully diverse group of students.