After two home football games this season, many students know by now that M-A’s rowdy 12th man is the mascot of the school’s student body. Created in 2013 by students Nikhil Goyle and Jordan Long, M-A’s 12th Man is a group of six seniors who are usually at the very front of the student section at football games, decked out in spirit wear and hyping up the crowd. This year’s members are Phoebe Gerhard, Kai Shahani, Becca Schulman, Jack Scarborough, Ishy Mishra, and Kate Nelson. They plan themes at sports games and lead the chants that we blare at opposing teams. This year, the 12th Man has faced challenges with the administration’s renewed push for positive language.

Many students who attended the game against Elk Grove had good things to say about the experience. Sophomore Aaron Gutierrez said, “The game was fun! The 12th Man is really good at starting the cheers. You can hear them clearly.” Similarly, Junior Angie Gomez said, “The environment was good and there was a lot of support towards the football team. The 12th Man has a lot of energy.”

At times, though, popular chants and student section behavior are at odds with the administration’s goals of creating a positive environment. In February 2022, the Central Coast Section banned M-A from hosting the CCS basketball game for storming the court at a game. This was brought up at this year’s grade assemblies, where AVPs reiterated their “be kind” and no-swearing campaign, specifically encouraging students to be respectful at athletic events like football games.

On BearNotes, M-A’s weekly newsletter for students, parents, and staff, Principal Karl Losekoot reiterated that “one of our goals this year is to encourage the positive use of language.” He said that by being more mindful about not using offensive language, “we can minimize bullying, increase awareness of different cultures and perspectives, increase the experience of a respectful culture, and support the building of positive identities for all students.”

Nelson said, “We will probably play it on the safer side, because we really want to bring positive energy instead of being mean to other teams. There are things to be said about why our team is better, but not about making fun of other teams.”

Gerhard continued, “I think that even though it’s fun and usually meant in a joking way, we don’t ever want to create a hostile environment where other football teams don’t want to play us because they are afraid of getting their name shouted with nasty words from our student section.”

Shahani added, “On the other hand, we want a lot of energy, which brings us all together. We also want to throw our opponents off their game, of course.”

“We love the energy, but don’t throw things. If you’re in the back, speak up because we can’t hear you. But be careful of what you say because you will get kicked out of the game,” Gerhard said. 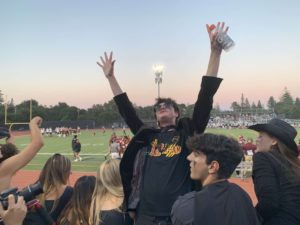 The 12th Man members are optimistic about this year’s football season. According to Scarborough, “Last year was a little lackluster. This year we have some new people and the student section is looking real promising. So far, it’s been great.”

“Our goal is to win both the state championship and the best student section,” said Shahani.

Nelson added, “Our team has really good chemistry, especially with Jurrion and Billy and all the other assets of the football team, so I think we’re probably going to go pretty far this year.”

The Menlo football team is off to a good start this year, having won all of their games so far, but Nelson said, “our Bears are going to be able to take them down!”

Jolene Chu is a junior at M-A this year and in her first year in journalism. She enjoys writing about student life at M-A. In her free time, Jolene enjoys running track, playing volleyball, and listen to music!