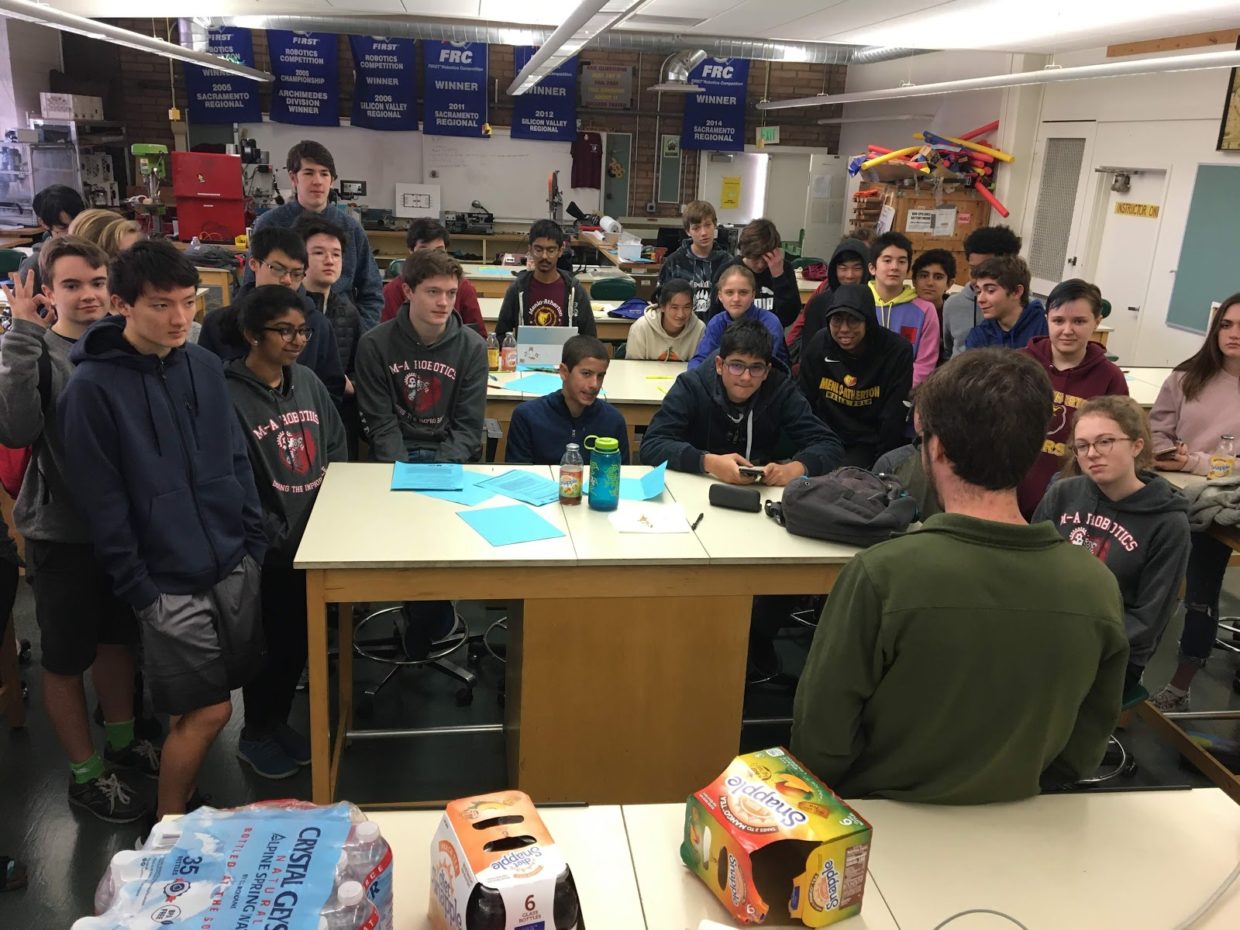 Cover photo: A typical Robotics Club meeting from the 2019-2020 school year, before the pandemic.

The enforcement of the social distancing regulations has introduced many obstacles for the M-A Robotics team, since its main focus is hands-on group work.

Before quarantine, the Robotics club would have 10-12 weeks of the season to work together to code, build, and design a robot that would enter into the FIRST robotics competition. Building this robot was ultimately very time consuming, so the Robotics Team originally met for 17 hours each week during their season. Now, the Robotics club has transitioned to be completely virtual.

The Team now meets on Zoom three times a week. The zoom meetings include activities meant to encourage competition and establish some normalcy for the members. The club’s president, senior Isabelle Brahana explained, “Now we’ve started an activity which is a bit closer to what a normal meeting would look like, though modified quite a bit. Team members are split into groups of five to six and given a challenge for which they have to design a mechanism. They have three weeks to complete a variety of different tasks, and at the end, they’ll present to a panel of alumni judges who will determine a winner based on creativity and functionality.”

While the team is doing what they can to mimic their typical competition season and meetings they had before the pandemic, there are still major differences. Maintaining communication and collaboration, which are crucial to the Robotics team, has become more difficult considering members aren’t supposed to build their robots together and there aren’t any opportunities to attend in-person competitions.

This is especially difficult for members like sophomore Evan Wong who hasn’t attended an in-person competition since he joined last year. He said, “What I miss the most is the actual hands-on experience of working on certain things like machining parts or working with electronics.”

Brahana added, “We can design all we want online, but it feels more abstract and less significant than actually making things out of metal. It’s also much harder to connect with people, since there’s no random talking as you’re waiting for the meeting to start, and it’s much harder to joke around and just chat.”

The transition to virtual robotics has also had many positive elements to accommodate for its downs. It has presented new opportunities for members like sophomore Amelia Kratzer. She explained, “My favorite part of moving online is that I have been helping to lead the programming course, which has been really fun”

Also, while the three-day Robotics Tournaments that the M-A Robotics team typically compete in each year have been cancelled, there are still online alternatives the club can compete in. Wong explained, “Instead of one main event where you build a robot for a specific challenge, FRC [FIRST Robotics Competition] has offered multiple challenges. These include an actual challenge design competition, a repeat competition of last year where you send in a video of your robot’s performance, and other more complex challenges.”

Despite the big transition, the Robotics team has remained optimistic. Brahana said, “Virtual Robotics has definitely provided a way to stay connected, though it’s not perfect, and I’ve enjoyed getting to learn some things that I likely wouldn’t have had the chance to in a normal year.”