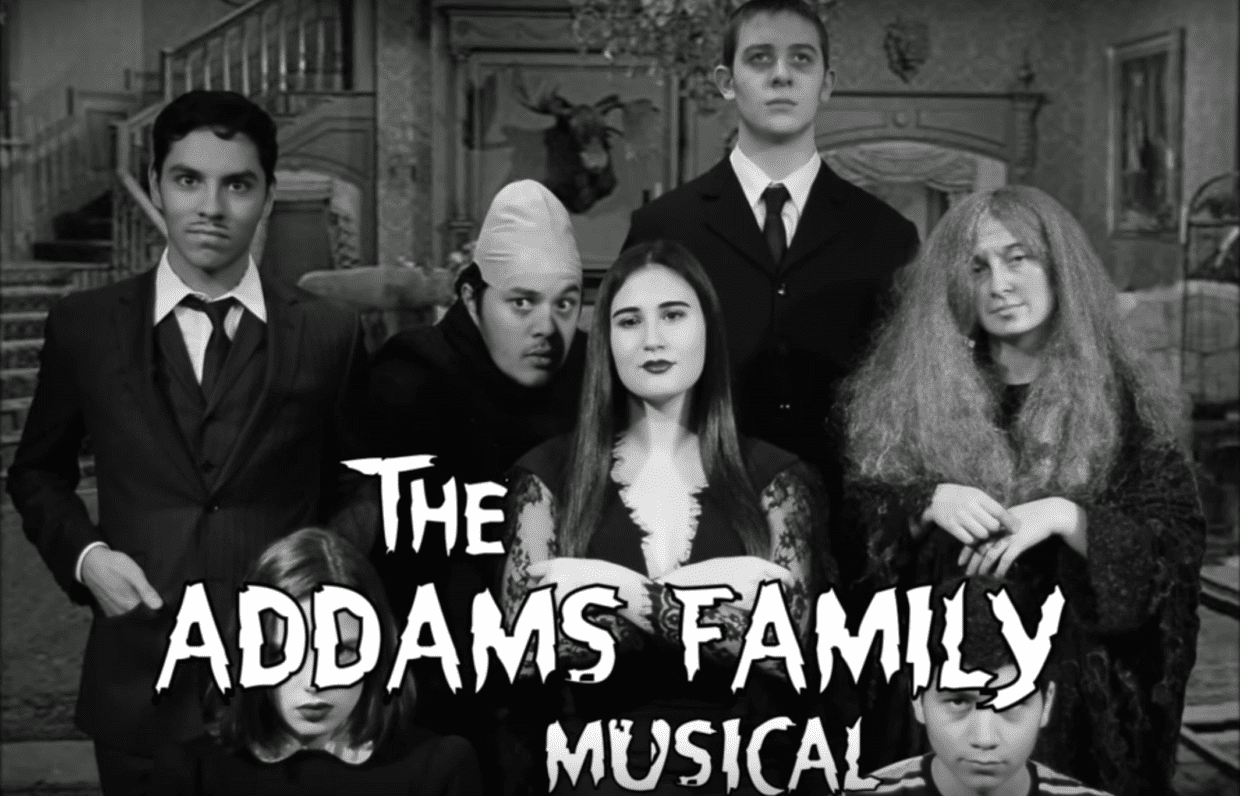 Review: The Addams Family musical is a hit

Despite the cemeteries, torture chambers, and ghosts, “The Addams Family” is a surprisingly heartwarming tale about finding love and learning to embrace life. Witty lines and political references make the dialogue engaging, timely and amusing. The outstanding solos were so catchy they had the audience humming as they left the show.

Like the drama program’s fall play, “You Can’t Take it With You”, “The Addams Family” recounts the story of two families brought together by the love between their children. These two families, however, could not be more different. Addams parents Gomez (Teddy Pagee) and Morticia (Izzie Nada), their two children, Wednesday (Emma Denend) and Pugsley (Michael Pagee), Grandma (Manuela Velasquez), and Uncle Fester (George Stevenson) are obsessed with all things gruesome and morbid. And the three Beinekes — mother Alice (Kelley McCutcheon), father Mal (Ethan Stoneham) and son Lucas (Milo Brosamer)— are, well, from Ohio.

After three months of rehearsal, opening night of this year’s musical was Friday, February 17. The musical began with one hand peeping through the curtains, snapping along to the overture performed by the pit orchestra. The audience was quick to join in, snapping, clapping, and stomping to the rhythm of the familiar melody. The curtains rose to reveal the six Addamses facing backward at a cemetery. Bunny hopping and twisting on the graves of dead ancestors to wake them, the family is joined by generations of Addamses to perform “When You’re an Addams.” The upbeat number set the mood for a delightful evening of song and comedy.

The storyline begins when Uncle Fester announces a shocking problem: “Wednesday, who would poison her brother just for a ride in the ambulance, is in love with Lucas!”
Determined to help the young lovers, he performs “Fester’s Manifesto,” urging his family to “not talk about anything else but love.”

Now picture Fester. In the M-A production, he’s got a Disney lunchbox, a black cloak, and balloons. One of the most endearing characters in the show, Stevenson never failed to make the audience smile. His solo “The Moon and Me,” featuring a tiny banjolele, stole everybody’s heart.

Gomez, like most fathers, struggles when he hears about Wednesday’s relationship and is stuck between a rock and a hard place when his daughter asks him not to tell Morticia about the marriage. Pagee’s hilarious and touching performances of “Two Things,” “Wednesday’s Growing Up,” and “I’m Trapped” kept the audience riveted. A hilarious Spanish accent, perfect timing, and goofy demeanor made Pagee the funniest character in the show, and his numerous solos highlighted his musical ability as well. With lines like “Wednesday is growing up, but I’m not ready! She’ll be Thursday before you know it!” and “I’m trapped like a moderate right wing!” Pagee kept the audience rolling in laughter the whole night.

Wednesday, seemingly completely out of character, suddenly finds things “cute,” wears yellow for the first time, and begs her family for “One Normal Night.” Her struggle to stay true to herself and her impulsive personality keep the audience dying to know what will happen next. Wednesday describes her love in “Pulled,” a solo that showcases Denend’s stunning voice and stage presence. Her impressive range (and a flawless high B flat) placed her vocal ability in the spotlight.

Nada was excellent as gloomy matriarch Morticia, whose grim, poised personality served to balance her husband’s joking. A performance of “Just Around the Corner,” an attempt to console herself after learning that Gomez lied to her showed off Nada’s rich voice. Particularly impressive was her execution of a difficult choreography during the “Tango de Amor.” Arranged by choreographer Danny Harper, the dance incorporated a sword fight between Gomez and Morticia.

Said Nada, “With the dips and the kicks, not to mention the swords we’re slashing around, there’s a lot of potential for things to go wrong, especially when you start adding in things like heels and a floor-length gown.”

In addition to her vocals and dancing, Nada demonstrated her acting talent with a very genuine, emotional portrayal of a tricky character. She shined in the sentimental numbers, such as “Live Before we Die,” a dialogue with Teddy Pagee, demonstrating her ability to get into the headspace of her character.

The jokes that got the most laughs in the theater were the political ones. When Alice confesses the inspiration for her poems — “the one thing that everyone needs and so few have,” Morticia asks, “Oh, healthcare?”

Other asides about swing states, Tom Brady and the state of the world injected a note of reality into a fantastical plot.

All performances were enhanced, of course, by the ensemble of dead ancestors, the set, the costumes, and the orchestra. Aaron Grinstead’s set design was very well done and the crew did an excellent job seamlessly swapping out the different backdrops. Sharon Peng’s costume design was spot-on: the ensemble sported stunningly haunting white outfits amplified by deathly makeup done by students. The beloved Addams stayed true to their television prototypes. The pit orchestra led by Music Director Kent Kurrus was essential to the musical as were Director Danette Bathauer Grinstead and vocal directors Dr. Kay Kleineman and Patrick Maier as well.

All in all, this musical is perfect for anyone who loves a good laugh. Perhaps the Addamses will inspire you to live a little before you die and be a little crazier. As Alice Beineke realizes, “crazy is underrated!”

To find out what happens at dinner, make sure to catch The Addams Family Musical at the M-A Performing Arts Center on February 24 at 8 p.m. or February 25 or 26 at 2 p.m. Find tickets here. Congratulations to M-A Drama on an excellent production!