Reshaped: The Evolution of the Corset Top

Most famous during the Victorian era, corsets have been a staple in women’s shapewear for centuries.

These binding pieces were first developed in the 1500s, and the popularization of corsets represented a fundamental shift from people wearing clothes meant to fit their bodies, to clothing meant to alter them. “Corset” is a derivative of the Latin word corpus, which directly translates to “body.” This highlights the corset’s goal of reshaping the figure.

In this era, tightly laced corsets were meant to be worn from childhood until a woman’s wedding night, and represented a woman’s purity, an idea perpetuated by the patriarchy.

These expectations of women, though archaic, continued into the 20th century.

Eventually, in 1968 protests against the Miss America Pageant, corsets were considered instruments of female torture, meant to imprison bodies and force them into an unnatural shape. However, people today hold different views on corsets and their uses. Vivienne Westwood’s 1970s punk-aesthetic runways brought back the corset as a form of empowerment and expression rather than a binding article of clothing. This led to the re-popularization of corsets, shown on runways first and cascaded down to everyday fashion.

Around M-A’s campus, students often wear them. Senior Sophie LeVasseur explained “corsets make me feel empowered for sure and I wear them roughly once a week.”

When asked about the shift they represented, LeVasseur said “corsets used to be about shaping the body and beauty standards, but now they represent breaking that mold and just being fashionable.” 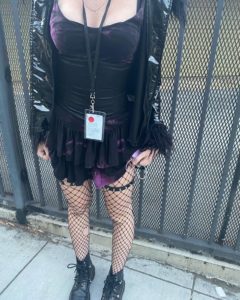 Senior Mezzy Epinendio said, “I don’t think the beauty standard they used to represent is anywhere near as strong or expected anymore. Corsets had been used to give women 16-inch waists, but I definitely don’t know anyone who even thinks about corsets in that sense anymore. It’s just a fashion thing now.” Image of the author

This shift shows a fundamental change from conforming to the “standard” way of dress to wearing what makes someone feel comfortable. Whether wearing corsets is seen as resisting the way women used to be confined through clothing, or simply as aesthetic, corsets have increased in popularity on campus, moving to a form of expression.